We’re pleased to announce the launch of a redesigned site for Joie Gatlin – Morley Abey Show Jumping, Inc. at www.joiegatlin.com. And speaking of Morley, in his interview in our last newsletter, we mistakenly referred to Tara Smith (mother) when we intended to mention Alex Smith (daughter). Our apologies!

Congratulations again to John French and Rumba for an amazing performance at the ASG Software Solutions/USHJA International Hunter Derby Finals this past weekend.

We thoroughly enjoyed getting to know EquiFit, inc.’s Alexandra Cherubini – read this issue’s Industry Innovators. And we couldn’t fit all the details from the Ashlee Bond interview in our print newsletter.

If you’re on Facebook, become an EquestriSol fan here.

And our thoughts are with everyone who is affected by the wildfires – we wish them, their animals and homes continued safety.

As a Canadian who spent most of his summer working with clients in Canada, we wanted to get an ‘Up North’ Report from a good source. 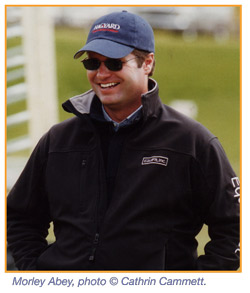 EqSol: Where are you from in Canada?
MA: I am from Edmonton, the capital of Alberta, just three hours north of Calgary.

EqSol: How many years have you been competing at Spruce Meadows?
MA: My family competed at the first show 33 years ago (1976). I competed in the Rocky Mountain Hunter Ring on Junior Hunters when I was 8 years old. The last time I competed there was in 1996, the year I met Joie (Morley’s wife).

A bit of Spruce Meadows History…
Formerly a cattle feed lot, the Southern family transformed a field into one of the best equestrian facilities in the world. Construction started in 1973 and the first tournament was in 1976. The horse shows attract over 450,000 spectators each year, with 65,000 recorded in attendance on Sunday of the 2008 Masters Tournament. Having strong commitment from a large number of corporate sponsors, the prize money exceeds six million annually.

EqSol: You’ve been to a lot of facilities all over the world – is Spruce one of the best?
MA: Most definitely Spruce is one of the best. They take such good care of the place and make it special for exhibitors.

EqSol: What makes it special and what are your recommendations to spectators and/or exhibitors?
MA: There are so many reasons why Spruce is special but one that comes to mind for me is that they only use the International Ring three times per year, and for the big classes only. So when you say you’ve ridden in the International Ring at Spruce Meadows it means something.

Whether you compete in other arenas or go just to watch great competition, everyone should see Spruce Meadows. It’s a fabulous facility. Horses and riders can do amazing things when a crowd of 20,000 or more is cheering them on. Not to be missed!

And when you go up to Spruce, don’t miss out on the Egg Burger or Grasshopper Beer, both a must!

EqSol: One fond memory of this past summer?
MA: I would have to say the weather. Spruce’s Achilles heel is the weather – it can be miserable. But this year it was dreamy, likely the best year ever. Maybe a sign of years to come…

EqSol: Tell us about Blue Valley Farms.
MA: It’s a very special place. The Smith’s built a destination for local riders to come and train, and they really made it top notch. It is more than a facility – it is the nicest barn I have ever been to. Alex, their daughter, was the catalyst for me returning to Canada. Joie and I opened JG-MA SJ, Inc. – Canada and Chris Starr, a former employee, did a nice job of developing a customer base.

Honestly, although we did well, it was too hard to run another business. The staffing issues, the time away from our California operation as well as time apart from Joie was too much. So now I only work with Alex and we were lucky enough to find Darrin Dlin to move his business and lease the stall the Smiths aren’t using. That means I can focus on training Tara when I’m there and not on having to run a business. 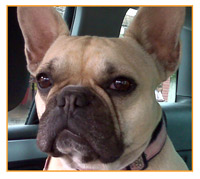 We do plan to have our first Blue Valley Farms horse show next summer at the end of July. We’re going to only have 150 horses, offer special incentives to California riders and more – I’ll give you the details when I have them.

EqSol: How has Sunshine (Morley’s French bulldog) changed your life?
MA: She is a great companion and travels with me everywhere. I’ve had people approach me at shows asking about Sunshine and don’t even know who they are.

When I was in Portugal for the developing riders tour, someone asked me where Sunshine was – she has a huge international fan base! As for her agent, we’re talking to Justin Timberlake’s people.

Thank you Morley for your time and expertise on Spruce.

Growing up around horses, I could handle watching them get sold. I could even handle watching them get hurt, and could usually keep a stiff upper lip when the vet would say that this particular horse was not going to be able to do its job anymore, but watching them die was something I had never had to deal with. None of the horses at my mother’s barn had ever encountered any life-threatening injuries, and even the school horses were sent off to an old friend’s stable when their time loomed near. This, however, all changed on March 17th.

My horse died. My horse Tustin, whom I purchased from Europe as a five year old, who took me from borderline terrifying rounds in the Modified Junior Jumpers to wins in the High Junior Jumpers, who tolerated my mistakes like an old school master even though he was barely eight years old, who would stand stock still as four-year-old riding school students (and myself, of course!) fawned over him, who would leave the ground from any distance at any jump without question, shattered his pastern bone in the turn-out.

This simply was not supposed to happen. This is my last junior year; we were supposed to qualify for Junior Young Riders together, and Prix Des States at Harrisburg, and maybe even Washington or Devon, and then, when this beloved, amazing horse could no longer do what I asked of him, he was going to be some lucky kid’s children’s jumper until he was at least 20 years old. All I’ve ever wanted was to become a Grand Prix rider, and after finally hitting the High Junior Jumper mark, I felt so incredibly close. I had so many dreams for myself and my little horse, and, in the time it takes to pull the plunger on a syringe, watching them all float away was unbelievably hard to deal with. Unfortunately, these things happen, and I’m glad I had the pleasure of owning and riding this very special horse. We grew by leaps and bounds together, and he was, and will probably always remain, my absolute favorite.

I don’t know how to say this without sounding cheesy, but receiving everyone’s condolences was wonderfully heartwarming. Hearing all these trainers and competitors and parents say how sorry they were gave me a great sense of belonging; people really do care. I look up to these trainers, and when the ones to whom I’d never really spoken (yet always admired from afar) came over and let me know how sorry they were, it made me feel good, like I wasn’t the only one who thought my little horse was great. I really wanted to be able to keep my feet in the jumper ring (hunters and equitation are fun, but nothing compares to going fast and jumping big!), so Archie Cox was kind enough to arrange for me to ride Marnix G, a horse who used to be in training with him, but is now at Joie Gatlin and Morley Abey’s barn. I got to show Marnix in the Low Junior Jumpers at the first two Oaks horse shows, and had a blast. Tustin was the only jumper I had ever ridden over anything bigger than 3’9”, so it was nice to be able to prove to myself that I am capable of successfully piloting a different horse over a decent-sized course.

I’m young and impatient and hate having to accept the fact that my goals are being delayed, but my parents have been generous enough to purchase another young jumper prospect. Hopefully this horse will eventually be able to take me back up to where I was, and will be able to stand the inevitable comparisons to his flawless predecessor. As the wise adults have been telling me, life goes on!

Laura Listens is brought to you by Laura Ware. Winner of the 2007 LAHSA Junior Medal Finals and a recipient of the 2008 WCAR Jumper Rider Grant, Laura rides with First Field Farm and often trains with Archie Cox. She is very successful in the all three disciplines on her own mounts as well as catch riding other horses.

NEW CLIENTS
EquestriSol is pleased to announce our newest clients – Jenny Williams’ LaSalle Farms and Jennifer Stewart’s Highland Farm in Moorpark, CA. We look forward to creating innovative solutions for their business as well as enhancing their market reach in the hunter/jumper community. What can we do for you?

Are you ready to develop a fabulous ad or build a web site? Has your web site not been updated or redesigned in months or even years? We work hard to help clients attain their marketing goals. Contact us for more details.

JOIEGATLIN.COM / MORLEYABEY.COM LIVE! visit website
We’ve revamped Joie & Morley’s site – take a look and learn more about who they are, where they are headed this show season and loads of great press. Impressive!

UPCOMING AD DEADLINES
From custom ad design and placement to developing copy, we can handle every aspect of your advertising campaign. Our equestrian experience is an asset in understanding the look and feel our clients seek in print advertising and the results speak for themselves. Look for EquestriSol designed ads in current and upcoming issues of The Chronicle of the Horse, Show Circuit Magazine, USHJA’s In Stride Magazine and in horse show programs around the country. Contact us for more details.

Chronicle of the Horse – published weekly
• Deadline: 2 weeks prior to the publication date