If I had a million dollars…
With two $1 Million Grand Prix events taking place in September, equestrians from across the country were vying for their piece of the pie. As part of HITS-On-the-Hudson in Saugerties, NY, the coveted top prize in the first ever Pfizer $1 Million Grand Prix was awarded to McLain Ward and his stellar mare Sapphire (McLain Ward & Blue Chip Bloodstock, owners). Ward and Sapphire rode double-clear after second place duo, Charlie Jayne and Athena, the other clear team from the first round, pulled a rail in the jump-off. Fresh off his $250,000 FTI Grand Prix win at the Hampton Classic, this event was Ward and Sapphire’s last competition together before making the trip to Kentucky to compete in the WEG. 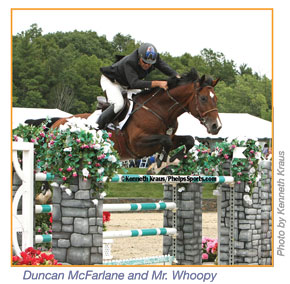 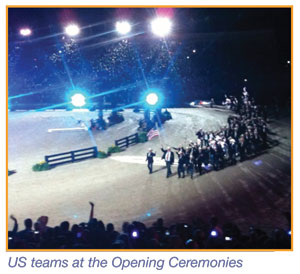 The WEG is here!
The long awaited World Equestrian Games are well underway in Lexington, Kentucky. We are not only pleased to be here but were honored to attend the Opening Ceremonies. There was plenty of exceptional talent, but the Friesian team of ten was simply magnificent. Watching ten jet black steeds all dressed in white polos prance in perfect sync and perform a dressage drill without a hitch while their manes flowed freely was a joy. We also took a few iPhone photos that show some of the fun. We will of course be back with bells on for the week of show jumping and look forward to some shopping time. Can hardly wait for the Final Four on Saturday, October 9th. Should be a sight to see!

We enjoyed interviewing Guy Thomas. He’s a multi-faceted individual and we wish him the best of luck next week. Even though he is representing New Zealand, he also represents California. And of course, it goes without saying – GO USA!

Here’s a video of the Friesians during the opening ceremony from “DreamGait”.

West Coast USEF Talent Search
Preparing our high-level equitation riders for the jumper arena, the USEF Talent Search tests flatwork skills, how a rider handles gymnastic exercises and their mastering of a jumper type course on the field, including an open water element. One of the most challenging medal finals, the top four are required to each ride one another’s horse to determine the top placings. Riding under the tutelage of Karen Healey, east coast equestrian Taylor Ann Adams bested the field for the win. With scores well into the 80’s on each of the final four horses she competed on, her consistency and style paid off. Second went to Jocelyn Neff, another Healey student. Rounding out the top four were Jennifer Parker, trained by Benson Carroll and Caroline Ingalls, who rides with Hap Hansen.