West Coast Rider Guy Thomas
An unforgettable equestrian event has come to Kentucky. Although many riders will be otherwise engaged as the show world continues with Capital Challenge and numerous other competitions, we will all have some way to watch the action at the Alltech World Equestrian Games. Whether following through friends, TV coverage, web channels, e-news or with your own eyes in Lexington, multitudes of horse aficionados will be tuning in. 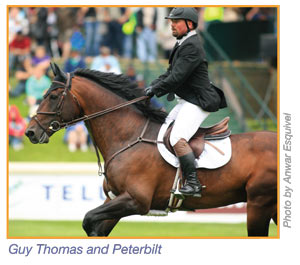 Northern California rider Guy Thomas is here. He has earned the honor of competing on a team, representing New Zealand. He will also be riding a homebred horse, Peterbilt, who he has developed from inception, along with his parents Butch and Lu Thomas. We had a chance to sit down with the man from Northern California with New Zealand roots and I have to say, he’s quite a guy.

I competed a couple of times that way. I rode in this welsh pony class, there were three of us – one kid stopped and one kid fell off and I was good but didn’t have a saddle and I didn’t get a ribbon. Dad said I picked up my grooming box and claimed that I didn’t want to ride anymore.

EqSol: Your junior years once you were in the saddle?
GT: I rode in the Pony Hunters and Junior Hunters. I also competed in the Onondarka Medal nine times and was 2nd all nine times. Second didn’t qualify you back then, so that was it from my equitation career.

I remember riding in the Pony Jumpers at Spruce. I went in the Pony Grand Prix at Spruce on the International Field when I was 11 or 12, I don’t think they have that class anymore. That year they used the built-in liverpool as the open water for the ponies. I thought it looked like the Pacific Ocean and I was terrified. Luckily I had a great pony from New Zealand that I did everything up to the Juniors on – Caruba Gold – and we won.

EqSol: And years later deciding to turn pro…
GT: I showed in the amateurs for a year or two and then started running my parents barn in Woodside – training, riding, whatever it entailed. For me it was either turn pro in this sport or in rodeo. I’ve always been a rodeo freak. But after considering it, riding a bucking horse or bull didn’t look that appealing. I would end up with far more broken bones than paychecks. I rode steers one year in New Zealand for a few weeks and I figured out that the only way to get off was to fall off; not fun.

EqSol: Speaking of paychecks, how about your Triple Crown win?
*A series of shows in Northern California offered a $70,000 bonus to any horse and rider combination who could win all three Grand Prix events consecutively
GT: It was awesome. To have that kind of money available for the winning at all is quite impressive. Rudy Leone and Adrian Ward have done an am amazing thing for grand prix riders everywhere, but especially for Northern California.

Last year I won the second two legs. So this year I definitely had a plan. When we got to the first class I did everything in my power to win because then I had a chance. And Peterbilt was so consistent. Three grand prix classes in the same field, same jumps, he was just amazing. Each class was 1.45-1.50m; they were really good courses, not soft.

Six or seven were clean in the first prix, I was the only clear ride in the second one and in the final class there were seven clean. I had four rides in that class and Peterbilt was the last of my rides. I had rails on the other three, and when I was on Peterbilt I could feel my hands gripping on to the reins a bit tighter halfway around the course. I had to tell myself, ‘Hey, it’s just another bunch of sticks – you can’t over think it.’

Luckily I was last to go in the jump off. There were some really good combos like [Peter] Breakwell on Lucas, Duncan [McFarlane] on Mr. Whoopy, Helen [McNaught] on Caballo – plenty of loaded guns in the field. Note that Breakwell is a fantastic rider, he’s sneaky fast. I could tell he was quick, but his time was even faster than it looked. Watching him I knew I could nip at his heels, and Peterbilt was ready. I didn’t know I could actually beat him by two seconds…

I donated $20,000 back to the horse show organizing committee to support what they’ve done for the riders. I was the first one to ever win it and I want others to have that chance, or even for me to have that chance again! If I could help make that happen, I was happy to do it.

EqSol: Some of the names you mention above are from New Zealand. Tell us more about your parents and the business they’ve built here in the US.
GT: Over the years, several kiwis came over to work for my parents and went out on their own – Duncan McFarlane, Peter Breakwell and Rachel Yorke (now Fields).

My parents, Butch & Lu Thomas, head the whole organization. When not at shows, they spend most of their time at our private barn in Burson, CA. We now own over ninety acres – it started nineteen years ago with twenty acres and slowly we’ve purchased more property. We keep a mix of my show horses, dad’s racehorses, our young horses and our bucking bulls there. That’s where my show horses go to relax.

That’s also where we breed and raise the babies. We’ve been dabbling in breeding for quite some time but here in the last couple of years with Karl Cook’s stallions and Mom’s stallion we’ve developed some nice young stock. Dad handles all the breeding, he enjoys it and has a great eye.

All the client horses are at our barn at the Woodside Horse Park. We’ve been there three years now – it’s a great facility with tons of open space and plenty of rings. When we aren’t on the road, Butch and Lu come over on Saturday and teach a big group lesson.

EqSol: Bucking bulls?
GT: Bulls are my hobby. Dad has the racehorses and breeding, so I decided since I love rodeo that I was going have bucking bulls. This is the third year I’ve been involved with the ABBI (American Bucking Bull, Inc – abbinow.com). It’s not lucrative yet – we now have twelve bulls between ages of 2-4. I don’t like bucking the two year olds, they can get hurt. I have two right now, one could be an absolute superstar – he’s electric. The other one is good but he can go too hard, too fast and then falls down, but he’s only two. To train them you use a dummy box with a remote. The box sits on their back. When you practice if they buck like you want, you hit the button and the gear falls off. It’s a reward system.

I just had four of the older ones go to a futurity. I would like to see them win and go to the PBR (Professional Bull Riders, Inc. – pbrnow.com). The prize money is pretty good if you win the Futurity Finals – the last two years the owners of the winning bull have taken home a check for $250,000. Dad has a fabulous four-year-old bull, Ghostrider. In 10 times out he’s only been ridden once, the other nine times he bucked the cowboy off in under two seconds. 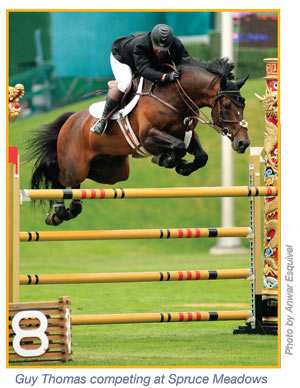 EqSol: Let’s talk WEG…
GT: The WEG was part of the plan to this year. I earned my certificate of capability on Carino and Peterbilt last year at Spruce. Once it was more of a realistic option we tried to pick and choose the classes what would best suit to get us ready for something like the level of the WEG.

The biggest class we did was the Queen Elizabeth Cup this year at Spruce. Peterbilt felt great. I caused the rail in the first round; I was too long at one oxer and had the back rail. We could’ve been in the jump-off with Hickstead and Lamaze but ended up 7th. The nice thing with Peterbilt right now is that as the jumps get bigger and spookier, he rises to the occasion.

I do feel ready. I’m excited nervous, but not so much worried nervous. You never know what can happen at a competition like this. If the cards fall right maybe I can scare a lot of people.

It’s a big field trip – my girlfriend Kristin and lots of family are all heading to Kentucky.

Thank you Guy – from babies to bulls, it was an interesting interview. We wish the best of luck to the WEG New Zealand Team: Guy Thomas / Peterbilt, Samantha McIntosh / Loxley, Katie McVean / Delphi (half-sister to Peterbilt) and Maurice Beatson / Apollo.