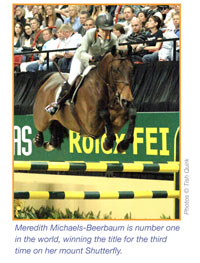 While we make our way through one of the most challenging economic times we’ve had as a nation, if not the world, there are shining stars and glimmers of light at the end of the tunnel. Whether the economy is up or down, our own niche of sport horses never ceases to please and amaze us. Take a close look at this week’s stories from Carleton to Compton to World Cup.

Touted as one of the best World Cups ever, we are still talking about the once-in-a-lifetime events that occurred in Sin City at the 2009 Rolex FEI World Cup Finals. First, Meredith Michaels-Beerbaum not only won for the third time in her career, but she was the leader in every round. McLain Ward tried to catch her and came quite close; he also had an extremely successful weekend, finishing second to Meredith by two seconds over four rounds and a jump off (Friday). 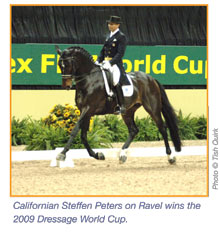 Next, our American top hats are off to Steffen Peters who dressaged his way to a World Cup win over some of the world’s best riders. His high scores included a 93 in the artistic category on the final night, as his horse Ravel danced to the music of his freestyle ride. Notable that Meredith was American-born, but is now a German citizen whereas Steffen was German-born and now lives and trains in nearby Escondido, CA.

Rich Fellers rode the relatively green Kilkenny Rindo to the blue in the Las Vegas Grand Prix on Saturday of World Cup week. Very pleased with the horse, Rich is currently bringing along a number of jumpers for the Boyds of Kilkenny Crest. Some of our reigning riders, including Olympic Gold Medalists Will Simpson and Anky Van Grunsvan, donned cowboy boots and chaps atop reining horses in an exhibition match – certain also to be a first. Both of course rode well and the crowd loved it. 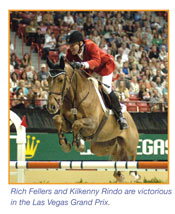 The room was buzzing at the final press conference on Sunday, not only with the excitement of the fabulous sport all had witnessed, but at the conclusion Robert Ridland made an announcement that put the icing on the Las Vegas FEI World Cup cake. After ten years of participation, Ridland took the time to honor some of the many names that made this phenomenal event possible year after year, including John Quirk, Bob Maxey, Shawn Davis, Tim Keener and Pat Christensen, among others. He then stated that Blenheim EquiSports, with the full support of Las Vegas Events, would be making a bid to bring the FEI World Cup Finals back to Las Vegas in 2014. “This team, this event is too good to give up,” he said. In response to this announcement Sven Holmberg, FEI Vice President, replied with a smile that the 2014 bid would be “very well received.”