You Should Always Strap One On
The decision to strap on a helmet before mounting a horse is a decision that could save your life. Without a doubt you should strap one on before getting on.

Ever since well-known Dressage rider Courtney King Dye’s accident many riders have seen the helmet light. Courtney was in a coma for a month after her horse slipped and fell. Not wearing a helmet at the time, she suffered severe head trauma. Her fall started an avalanche of riders who decided to change their ways and start strapping one on.

I will never leave the barn without my helmet after what happened to my mother. She was out hacking one day, luckily with her helmet on, and her horse stepped on its front shoe and fell to the ground. She left the fall with a couple broken ribs, a broken ankle, and no recollection of what happened. It took her over a month to get her head back to normal after hitting it that hard. I shudder to think of the outcome if she hadn’t been wearing a helmet.

Can Riders Rise Up and Buck Tradition?
One rider noticeably changing her ways is Alison Springer. As a top event rider, she would wear a top hat during dressage like every other FEI rider. During the dressage phase at the 2010 Rolex event, Alison shocked the crowed when she entered the ring wearing not a top hat but her ASTM/SEI approved helmet. For her this was just a simple choice, but it was one that sparked major rule changes in equestrian sports. The USEA has now made it mandatory that all riders wear an ASTM/SEI approved helmet during dressage. This rule has not reached the FEI level yet, but many riders in the 2011 Rolex event choose to leave their top hats behind and strap on a helmet.

Another noticeable statement made by a rider was the one Steffen Peters made during the WEG. He dedicated his ride on Ravel to Courtney King Dye and choose to strap on a helmet. He became the first American to win two individual golds at the world championships. Ever since Courtney’s accident he has become a advocate for wearing a helmet. He hopes many other dressage riders will follow his lead and start strapping on.

Seems to be happening slowly but equestrians are beginning to realize the importance of wearing a helmet. 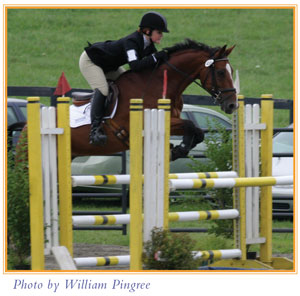 Two areas in the horse world that this trend has yet to reach effectively are show jumpers and western riders. Show jumpers are known for hacking, even warming up over jumps, without a helmet on and then putting it on to compete in the ring. Since an accident can happen at any time, not just in the show ring, it seems these riders should be protecting their head whenever mounted. There is a select group that is riding the helmet train (see the EquestriSol article on Beezie Madden), but their numbers are limited. Hopefully many will learn that wearing a helmet is a better decision, and it won’t take an accident like Dye’s in the jumper world to wake people up.

For years cowboys have been riding around on the ranch with just a cowboy hat. The symbol of a western rider lies within that weather-beaten hat, but unfortunately it does not protect their head. Bull and bronco riders have smartened up and begun wearing protective helmets. However many western riders have not switched to helmets because to them it is not proper attire. It’s time for this discipline to stop risking their lives for fashion and tradition. Troxel has come out with an approved cowboy hat, however this cowboy hat does not look traditional. I believe it is going to take the construction of an approved but tasteful cowboy hat to protect the heads of the western riders.

Brainy Statistics
Statistics show that horseback riders are hospitalized more often then football, soccer, and boxing athletes. Did you know that a fall from just two feet can cause brain damage? When mounted on a horse we can be elevated to a height of eight feet and a fall from that height, without proper precautions, can potentially mean death to a rider. Statistics also show that at speeds of 7-10 km the brain can shatter. A horse can travel up to 65 km at one time. This information alone should make riders aware that riding is inherently dangerous. Horses are unpredictable animals. Unforeseeable events can occur at anytime, no matter how well you ride. Is the risk of your brain shattering really worth leaving the helmet behind?

I ask myself this question often yet I still hear different excuses amongst riders that are unwise enough to go without a helmet. The top excuse that gets me is, “It’s too hot to wear a helmet.” This one I find funny because many helmets are designed with air vents that cool the rider’s head off. Aside from that is protecting your brain not worth the slight increase in heat? Another excuse I have heard is, “Helmets look dumb” or “Only beginners wear helmets.” The truth: ‘dumb’ is the rider who fails to wear a helmet.

Now there’s a site called Riders4helmets. This campaign started after Courtney King Dye’s accident to make people aware of the importance of wearing a helmet. Riders4helmets sponsored a national helmet awareness day on June 11, 2011 to increase people’s awareness of the importance of wearing a helmet. Helmet makers ranging from Charles Owen to GPA offered large discounts on their helmets on this special day. See the website for all the strapping on action.

The next time you decide to leave the barn with a bare head I hope you think twice. You are allowed to make your own decisions, but don’t we pride ourselves on making intelligent ones? Think about your friends and family. No matter what, you should always strap one on when getting on.

About Alexandra Pingree
I grew up in Hamilton, MA on a horse farm with my family. Riding since age six, I started out in the Hunter Jumper discipline and switched to Eventing when I was 11. I have reached the FEI CCI* level with my Irish Sport Horse, Toy Master. I currently compete on my two Irish horses. I have earned my silver medal at the preliminary level and I am hoping to move up to intermediate soon. I would like to make horses my career and to represent the United States at the Olympics someday.

I don’t hesitate to always strap on a helmet when I get on a horse. I don’t feel fully ‘dressed’ without protecting my head. My mother made sure that wearing a helmet became a habit for me and I am forever thankful.

Use Your Head – Wear A Helmet
Last winter Beezie and John Madden went on a skiing holiday. Between the busy schedules of an international show jumper (her) and an FEI official and coach (him), it had been at least six years since the couple had taken time off from horses to hit the slopes. Once suited up, the pair quickly realized they were missing an essential element. Halfway down their first run, John and Beezie became acutely aware that they were the only two skiers on the mountain not wearing ski helmets.

This realization made the vacationers feel uncomfortable on many levels. So much in fact that post that initial run down the mountain they went straight to the ski shop and bought helmets.

In January Beezie attended the Riders4Helmets Helmet Safety Symposium 2011, held in Wellington, Florida, and retold this story to illustrate a very important point. She explained, “If more people did it (especially well regarded Olympic level riders) more people would get comfortable doing it.” 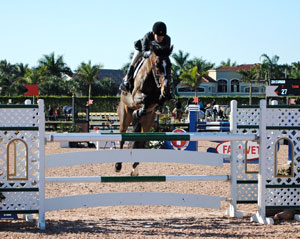 Beezie was attesting to the importance of helmet use while riding horses, and pointed out that if a sport such as skiing, in which helmet use was nonexistent a decade ago, can experience a universal shift to helmet wearing, there’s no reason that the horse industry can’t do the same.

New Rules, New Trends
Recent rule changes by the U.S. Equestrian Federation to enact stricter helmet laws in the disciplines of dressage and eventing are a good step, says Beezie, but we still have more to do.

Referring to the recently passed rule change for dressage that requires helmets with the exception of those “competing only in FEI levels and tests at the Prix St. Georges level and above.” Beezie agreed with one exception. “I wish they [USEF] had gone so far as to say that dressage riders had to wear helmets at the grand prix level. It’s important that the top riders wear their helmets, and be seen wearing their helmets.”

The helmet-wearing campaign launched by Riders4Helmets.com in April of 2010 was initiated after Olympic dressage rider Courtney King-Dye fell from a horse and sustained a traumatic brain injury that left her in a coma for nearly a month. Thousands rallied around Courtney, who was not wearing a helmet at the time of her fall, in the weeks after the incident, and since then the discipline of dressage has seen a remarkable shift in perception towards helmet use. At the Alltech FEI World Equestrian Games last fall, dressage bronze medalist Steffen Peters donned his helmet during the awards ceremony, and dedicated his ride to Courtney, who was in the audience watching. 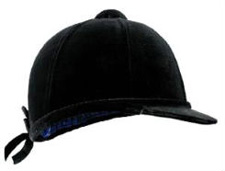 Show Jumpers Should Strap One On
Currently sponsored by Charles Owen Helmets, and previously sponsored by GPA, Beezie has longstanding relationships with helmet makers. She became one of the first three riders in the United States to wear a GPA helmet back when the popular style still leant towards the velvet hunt caps of yesteryear. At that time, a GPA “skunk stripe” noticeably stuck out, but “I figured if it was a safer helmet, it was a good thing,” the top rider noted. “If it got a lot of people to wear safer helmets and if it saved one or two lives, not to mention maybe my life, that was a big deal.” 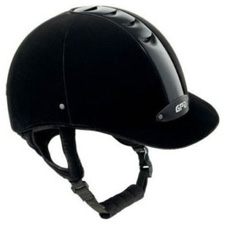 A two-time Olympic gold medalist and show jumping icon, Beezie is fully aware that thousands of horse enthusiasts look up to her and other grand prix show jumpers as role models. She believes that not wearing her helmet, even in the warm up ring at a competition, sets a bad example for the up and comers who watch her and tend to emulate her every move. “For the last four or five years, I’ve always had a helmet on, every time I’m on a horse.”

Old habits are hard to change, but as we all know a random spook or misstep can happen at any time, and can cause any level of rider to fall off unexpectedly. Beezie sincerely hopes that it won’t take a serious head injury incurred by a nationally known jumper rider to change rules and minds in her discipline. As skiers on the slopes can attest, global acceptance and change is possible.

RESOURCES:
Ride smart and strap one on. Everyone’s Doing it! Check out:
www.riders4helmets.com

Information on what’s happening with helmet rules and more:http://sidelinesnews.com/blogs/whatshappenin/usef-passes-new-safety-helmet-rules-for-eventing-and-dressage-riders.html