By Alden Corrigan and Christy Schreder

Joe Fargis at the Menlo Circus Club
On an unusually crisp December day in Atherton, California, Joe Fargis stands in the middle of the outdoor ring at the beautiful equestrian center of the Menlo Circus Club. His Paul Newman blue eyes are intently watching the students participating in the first day of his two day clinic as they execute his instructions with varying degrees of accuracy based on their ability. 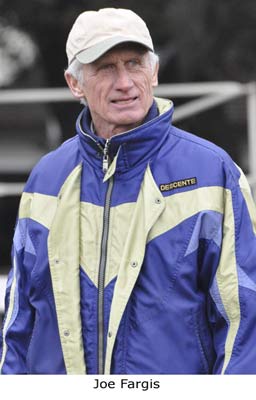 Fargis, now 60, has owned and operated Sandron Farm in Middleburg, Virginia since 1978 with his partner Conrad Homfeld. He continues to compete successfully in Grand Prix at many of the top horse shows in the country, and as a testament to his contribution to the sport, has was awarded the USHJA Lifetime Achievement Award for 2009.

This double gold medal winning Olympian in the 1984 Los Angeles Olympics and silver medalist in the 1988 Seoul Olympics has never lost sight of two critically important facets of our sport; the welfare of the horse and education of the rider, serving on the USHJA Horse Welfare Committee, and teaching clinics around the world when he’s not attending a horse show.

Fargis began riding in Vienna, Virginia under the tutelage of Jane Dillon at her Junior Equitation School. In 1966 he went to Francis Rowe’s Foxwood Farm in Crozier, Virginia and stayed there for the next twelve years, until he began training with the legendary Bert de Nemethy. “I use tools today that I learned from my early riding teachers. They were wonderful. Everything they said thirty and forty years ago still sticks. When I grew up we were at the barn every day learning something, and the horse show would be occasional. Now the horse show is frequent, and you’re never at the barn doing your homework. It’s gotten upside down.”

The word teacher comes up frequently when talking with Joe. He recalls a certain second grade school teacher; he makes references watching trainers teach in the schooling areas at horse shows, and even admits that if horses hadn’t become a career for him he might have chosen teaching instead. It’s no wonder that Fargis is one of the most sought after clinicians today, so much so that he often gives clinics in countries where he doesn’t speak the language, and has to rely on an interpreter. “Who knows….the translator may finally get to tell them what he really thinks,” Joe says in jest. 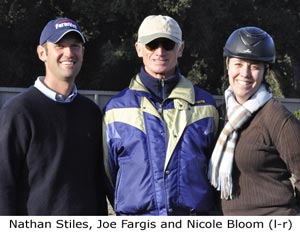 Nathan Stiles, assistant to trainer Nicole Bloom at Round Meadow Farm, LLC had the privilege of working for Fargis in 1997 when he was only 17, and Fargis has been a mentor to him ever since. Both Nicole and Nathan felt strongly that the Menlo Circus Club Equestrian Center would be ideal venue in which to host this event.

Stiles explained, “I wanted to bring Joe to the club for many reasons. I think the Menlo Circus Club is a perfect place to host clinics and other equestrian related events. Joe is a fantastic clinician and because of my relationship with him I thought he was the perfect person to bring to the club for what I hope is a long line of clinics to follow. Lastly, I wanted to ride with him. He’s always made me better just by being around him and every time he comes and gives a clinic I make sure to reserve one spot for myself. It’s a good refresher course of all the things he has ever taught me.”

Fargis finds clinics rewarding on many levels. “I learn a lot from teaching clinics, I remind myself of what I think. For the horse and rider they get a different point of view. When they take a clinic from me they see how I think, when they take a clinic from someone else they see how they think. Then it is up to the person to form their own conclusion about what’s good for them, what’s correct, or what’s incorrect.”

He further emphasized the unique benefits for the riders. “The value of having many different approaches presented to them is so that they can arrive at their own conclusions. There are a lot of different ways to skin a cat, but at the end of the day you want the horse to be balanced, straight, happy and correct and there are going to be different ways of getting there. I’m not saying I’m right or wrong but this is my way of getting there.” 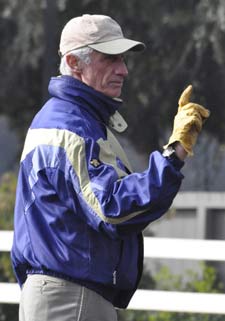 Remarkably Fargis will tell you he draws on his failures rather than his incredible successes when teaching: “I know where I went wrong. I don’t mean that in a negative way, I know when I’ve messed up, and I remember it very well… those can be more important lessons that the successful ones.” He goes on to say, “I think I know how to avoid the pitfalls… Age teaches you a lot.. the experiences you have with horses teaches you what works and what doesn’t work.”

One of the most common “bad habits” Fargis finds in his travels is that “People ride with too much emotion. Riding should be clean, well thought out, and if we make a mistake, which we all do because we’re human, it shouldn’t fluster us. We should take a deep breath and continue with riding. We inflict our agenda on the poor horse and he has no idea what’s going on up there.”

Fargis believes that people tend to forget what they learn in clinics very easily, however he says “I hope somewhere down the road, maybe a year from now some of these people say to themselves I get that or I remember that and it will click. You just have to hope that the right things come together at the right time.”

After all these years of teaching, what is it that keeps Joe Fargis coming back for more? “What I enjoy is trying to get my point of view across… that the horse is a living, breathing creature. You have to work with it… it’s not a machine… and anybody that understands that and isn’t flustered by it gives me great satisfaction.”

By Erna Adelson and Jackie McFarland

A name we have seen printed in prize lists for many years, we caught up with Scott while he was designing courses in Parker, Colorado for the series of ‘A’ shows at the Colorado Horse Park.

HOW A SUMMER JOB CAN LEAD TO LEGENDARY OPPORTUNITIES
“It’s been a long, strange, trip,” says Starnes of his ascent to his current status as one of California’s well-known course designers. Not a competitive rider but rather a former collegiate defensive back, Starnes’ experience in the elite equine world was hard to come by, and is a testament to his work ethic, determination, and skill as a technical designer.

It all began with the 1984 Los Angeles Olympics, when Coto de Caza was host to the Olympic pentathlon show jumping events. Starnes took what was supposed to be just a summer job as part of the set up crew and ended up having a knack for the assignment. Shortly afterward, he met the legendary Pamela Carruthers and upon her encouragement traveled to Spruce Meadows where he crewed and assisted with course design. During the next decade Starnes observed and drew inspiration from some of the finest in the field from Equitation Finals to Grand Prix, including Jon Doney, David Ballard, Richard Jeffrey, Leopoldo Palacios and Linda Allen. While assisting abroad, Starnes was also working his way up as a course designer in his own backyard, learning from Tommy Dendiu, Richard Keller and Michael Curtis about designing for hunters and equitation as well as jumpers. As the horse show schedule in southern California expanded, Starnes was gainfully employed and no longer
had time to spend summers in Spruce Meadows.

THE DIRECTION OF DESIGN – DERBYS & BEYOND
We asked about designing courses for the new USHJA Hunter Derby, a more recent addition to our ‘A’ rated shows that requires a designer’s imagination to create a demanding yet inviting course for hunters. Whereas an equitation medal final or grand prix have many of the same technical questions and distance challenges, the Hunter Derby has its own requirements. “It is supposed to be more like an actual foxhunt while maintaining traditional hunter style,” Starnes commented. “The class requires a completely different build, at least four height option jumps, 3’6” and 4’, plus handy options.” Only in its first year and growing in popularity, this class requires the skill of an experienced course designer and when done well is as awesome to watch as a great Grand Prix.

Certainly steeped in the system, Starnes is the first person to admit that his career path would be considered unconventional. “Nowadays course designing is regulated more strictly,” he says. “You need to apply for a license, attend a certain number of clinics, and design at least three grand prix courses every two years to maintain your certification.” He notes that the new guidelines require all course designers to get licensed which he feels helps to ensure the safety of both horses and riders and improves the sport for all involved.

FAVORITES & FUTURE
Though Starnes says that his most memorable assignments have been while crewing high-end events like the Olympics, World Cup and the Masters at Spruce Meadows because of the caliber of the designers and the athletes involved, he reveals that designing local and regional Medal Finals make him most happy. “I love designing at the Oaks because it’s home,” he says. Starnes is far from settled, though. With his FEI license pending, he may very well be back at the Olympics in London 2012, this time at the helm.