Jumping for a Just World
By Erna L. Adelson

In the previous newsletter, we featured Francie Steinwedell Carvin’s images from the October 2008 Just World International trip to Honduras. Since then, we were able to get a more in-depth account from Francie and also to chat with former international equestrian and JustWorld founder, Jessica Newman. 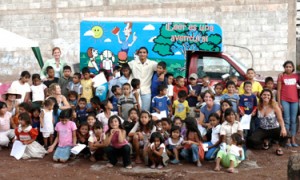 JustWorld International is a recognized International 501(c)(3) charitable organization in the United States and in France. Currently, this non-profit raises funds through its 160 professional, junior and amateur ambassadors representing over 20 different countries. JWI also partners in fundraising with more than 50 International Show Jumping competitions around the globe. The proceeds help to develop long term, sustainable education projects, targeting communities where local organizations have evolved to help children who often fall beyond the reach of government and large-scale humanitarian programs. Besides addressing immediate needs such as food and clean water for these children, JustWorld and its partners provide educational programs that will begin to equip the children for future lives of self-sufficiency.

In Honduras, Carvin and the JWI team helped implement these long-term educational and vocational training programs, as well as providing general relief and friendship to the citizens of an impoverished community. They volunteered at local schools and formed personal relationships with many of the people they met. Carvin was especially affected by the hardship she witnessed during a visit to a local dump. “We could not get out of our vehicle because there were cows, dogs, children, and adults all fishing through the trash, she said. “To see everything in motion, the birds soaring up, the dogs fighting, the plastic bags flying around everywhere – it had a huge impact on us.” She was also able to reflect more thoroughly on her own lifestyle. Carvin explained, “The trip really revealed the immense number of material things we live with as Americans, myself included. I have way too much stuff, I am going to have to go through and clean out my closets. There is someone who needs it more than I do.”

Carvin recalls, “The JustWorld projects are very well organized, including the local volunteers and the teachers. The mobile librarian was especially striking, according to Carvin who said, “The teacher was amazing! I don’t know where he got the energy! He was so good that even though I don’t speak Spanish, I could understand what he was saying.” She notes that the success of such programs has a lot to do with the diligence of Newman and the JustWorld staff. “If something does not work cohesively within the organization, Jessica immediately moves forward,” she said. For example, when an attempt to provide baby formula to the town’s orphanage proved futile since the recipients are so transient, Carvin was very impressed at how quickly Newman re-routed the operation so that other forms of aid could be supplied instead. “She cut her losses and made sure that progress continued. Jessica is also very good at surrounding herself with people who have the same concerns and goals to ensure that everyone is on the same wavelength.” Carvin hopes to expand her personal efforts with JustWorld. “I would like to go to Cambodia next,” she says, aspiring to bring about greater awareness for the cause at horse shows across the U.S. “I would love to take more people [to Honduras]. It is an incredible experience to meet the kids at the school along with their mothers,” she adds.

Newman, who recently returned from subsequent JustWorld trips to Guatemala and Mexico, explains that her equestrian connections have been especially beneficial to forming relationships with local, grassroots organizations. These connections helped to circumvent confrontation with some of the political unrest that is present in the countries where JustWorld gathers support. “We create reciprocal partnerships with our local establishments and all funding is monitored very carefully according to criteria mandated by international nonprofits,” says Newman. “This way, we avoid a lot of the corruption in developing countries.” During the most recent trips through Mexico and Central America, the organization partnered with existing horse shows to raise money for projects similar to the one in Honduras. The trip was a huge success, and the shows raised funding and support for JustWorld campaigns.

Now just in its sixth year of operation, Newman reports that JustWorld is at the stage where, instead of simply partnering with established shows, these competitions are actually becoming JustWorld events, complete with special classes where entry fees and winnings benefit JWI. There are also “horseless horse shows” which result in additional awareness and support. “This way, the link between equestrians and those in need will be a direct link as opposed to a connection through sponsorships and donations only,” she says, adding “Within the next five years, I hope to see JustWorld shows in every country where there is competitive horseback riding.” Judging by the support that JustWorld has garnered in its first five years, Newman and her equestrian ambassadors are jumping for a just world, one round at a time.

To find out more about this incredible organization please visit their web site at http://www.justworldinternational.org, or to send an email.