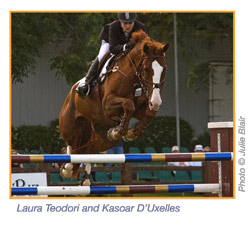 Increasingly becoming more consistent, twenty-year-old Laura Teodori is yet another West Coast rider showing potential at the grand prix level. We’ve watched her gallop in the arena on her big chestnut jumper, Kasoar D’Uxelles, since 2008. She competed in Europe this summer on the USEF Developing Riders Tour and upon her return we sat down for an interview. Laura is one of many young riders along with an extensive list of veterans vying for a chance to go to Geneva and compete in the FEI World Cup Finals in April 2010.

EqSol: Where you are from, how did you start riding, the early years…
LT: I grew up in Scottsdale, AZ and started taking riding lessons with my mom when I was four. She always had a passion for horses, but wasn’t allowed to ride growing up. I showed ponies and Junior Hunters with Sherry Templin, Kathy Johnson, and Lucy Alabaster. When I was 12 my dad was badly injured in a car accident, forcing me to take a couple years off of riding. When I came back I rode with Betty Beran. I continued to show in the hunters and bought my first jumper when I was 15. When I was ready to do some bigger jumper classes, Betty found ‘Luc’ (Kasoar D’Uxelles) from Barney & McLain Ward. We bought him sight unseen as an 8 year old. He had jumped 1.35m but didn’t have many miles. We got very lucky.

EqSol: You were competing as a junior in AZ in 2007, in medals and hunters. When did your grand prix aspirations begin?
LT: Like most kids, I had big goals. I’ve always wanted to represent the USA in international competition. I competed in my first grand prix in Arizona when I was 16 (2006) at 1.40m. Luc was still new to me, I’d only had him for two months and it was my fourth show with him. In 2007 we went to the first week of the HITS Desert Circuit and ended up Champion in the High Juniors and 3rd in the Jr/Am Jumper Classic. We went back and competed on the HITS Arizona Circuit, did the grand prix classes and I qualified to ride for Zone 8 at NAYRC (Young Riders). He gives me a lot of confidence, I feel like I can jump anything when I am riding him. We get along perfectly, he’s so brave – he’ll do anything I ask him to. For as big he is – he’s very special. He’s scopey and careful.

EqSol: The NAYJRC is always an interesting event. Tell us about Young Riders in 2007.
LT: Anthony D’Ambrosio did the courses. Guy McElvain was our Chef. He was great – very supportive. By far the toughest courses I’d ever ridden. The first day I had two rails and thought I had no chance. Then Friday I was the only one who managed to go double clear. That helped with my confidence. And on Sunday I was double clean again. I ended up winning a Silver Medal in the Individuals. It was a great experience.

EqSol: And how have things evolved since summer 2007?
LT: I briefly rode with Rudy Leone and had my first grand prix win with him at the 2008 Del Mar National. That was such a thrill! That show has an incredible atmosphere. But I wanted to be in southern California. Joie Gatlin has always been one of my role models as a rider, so I was very excited to move to Morley and Joie’s barn a year ago (July 2008). They are so professional and organized – the picture of how a show barn should be run. From the ground up – the vet, farrier – my horses couldn’t be better cared for. They work so hard – Joie wants the win as much for her clients as she does for herself. When she walks a course with me she is just as intense as if she walking for herself. I love that.

EqSol: Specifically what was your plan for 2009?
LT: They are very goal oriented at Joie and Morley’s – which I love – everything has a purpose. The first thing we did this year was to have a 2009 goal meeting. My biggest goal was to go to the Vegas Grand Prix. So I had to be competitive and consistently in the ribbons in World Cup qualifiers to achieve that goal. It was a lot of hard work – Joie and Morley boot camp early in the year – but it all paid off because we did it! The indoor at Thermal was ideal for preparing us for Vegas – the crowds, challenging courses, small space. Once you finished there the Thomas & Mack Arena looked like a Grand Prix field!

EqSol: The Saturday Grand Prix in Vegas – another Anthony D’Ambrosio adventure. You were the first to go clean!
LT: My favorite thing about Vegas was when I was walking the course – it was like a mix of all the courses at Thermal (again I have to say a good prep). Every mistake I had made during the qualifiers was in the course in Vegas, so I was able to correct those mistakes. It was very rewarding for the whole team to have everything come together. The coolest thing was being in the warm-up ring with all those international riders. Not only could I watch them warm-up, I jumped alongside them! Hearing all their names and my name announced together was amazing. To get to the ring you ride through a dark tunneland enter into lights, music, and a packed audience, it’s such incredible energy. It was just how is should be, a horse “show.” 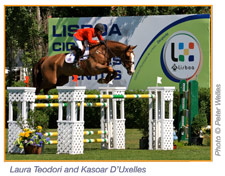 EqSol: Almost directly after Vegas in April was Europe in May. How did that come about?
LT: You apply and are chosen off the computer list rankings. The experience was completely surreal. We laid over in Barcelona at the Polo Club where the ’92 Olympics were held. We competed at a CSI2* and a CSIO4* in Linz, Austria and finished at a CSIO4* in Lisbon, Portugal. Of course some of the biggest and most challenging courses I had ever jumped. I didn’t go with any expectations, so even though it would’ve been great to come home with wins, it was invaluable. From the team camaraderie, working with Michelle Grubb and Eric Hasbrook, wearing the pink jacket with the stars & stripes, watching all the great riders – it was all amazing.

EqSol: And your future?
LT: What’s next – hmmm. My life is very day-by-day. It’s been a fantastic year and I look forward what the future has in store! I’m so lucky in so many ways – great support from my family, a horse of a lifetime, and working on developing another, and most of all Joie and Morley’s guidance and expertise – I learn from them every day.

Thank you Laura and best of luck! To read more about her time in Europe go to PhelpsSports.com – she wrote the 2009 Developing Riders Tour Blog.