Katherine Bardis
A senior at Loyola Marymount with Law School aspirations, Katherine Bardis is growing up. Considering she has only been in the jumper ring since age 14 and in the Grand Prix arena since age 17, she made a name for herself in a short span of time. Now 22 years old (for about a week at press time), Katherine is making adult decisions about her riding, her education and her career. 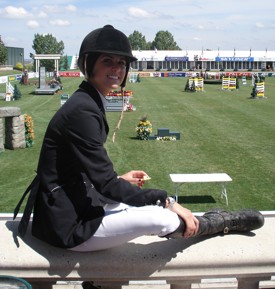 EqSol: Your equestrian start – where you are from, how you started riding, the early years…
KB: I started when I was about 10 years old. My older cousins rode and loved watching them but my parents would not let me start until I had tried out other sports first. I’m from Pebble Beach so the Pebble Beach Equestrian Center was almost walking distance from our house. My first lessons were with Toni Venza and Tracy Cotchett. I started in the medium ponies, then moved to the greatest large pony ever, ‘Peter Piper’ (PD) who we leased from Alex Silvestri. When I was 12, I won the Pony Finals on PD and then got my first Children’s Hunter, a little quarter horse named ‘Equal.’

EqSol: When did you know you wanted to ride in the jumpers?
KB: I was getting bored doing hunters and equitation. My mom really didn’t want me to do the jumpers because she knew once I started I would be hooked, which is exactly what happened. When I was 14, we went to Spruce Meadows just for fun with a couple of my equitation horses – my trainer thought it would be a good experience. That was when my dad and my trainer’s husband met Richard Spooner in the show office. Of course he was my idol, since we had just watched him win the Queens Cup and the Chrysler Classic. So I was extremely embarrassed that they were talking to him. Luckily, during their conversation (while I was timidly hiding in the corner) Richard mentioned that he had some horses for sale and that we should come and try them. And that’s how it all began…

We flew down from Pebble Beach to the Los Angeles Equestrian Center and ended up purchasing two horses, Prestige and Bada Bing. Within a month, I started riding with Richard. We went down on the weekends so I could train and go to shows with him. I hadn’t had any formal jumper training nor had I been competitive in the jumper ring before Prestige and Bada Bing, so when I started riding with Richard it was like a whole new world.

EqSol: Your GP history – when you started, the good, the bad & the victories.
KB: After Indio in 2005, I wanted to try and keep riding at the Grand Prix level. In 2007 I was a freshman in college so I didn’t have as much time to train. When I tried to ride in the Grand Prix classes at Thermal, I wasn’t in tune with my horses. I think I fell off three times! By the end I improved, I was 4th once and only had one rail in the $200,000 class. After a bunch of second place finishes from Blenheim to Spruce, my first win was at the 2008 Memorial Day Classic Grand Prix on Pariska. Another highlight was winning third in The Pepsi Challenge on the International Field at Spruce in 2007.

EqSol: Let’s talk about Summer 2009: The Developing Rider Tour experience.
KB: It was great to do something totally different – we did everything as a team – warmed-up, flatwork, we even ate meals as a team.

My favorite show was Lisbon – the horses did really well there. Leopoldo built the courses – I only had a foot in water in the Nations Cup on Pariska and placed in two other classes.

Riding on this tour really showed me what the next step up is all about. The pressure of being on a team, where three other people are relying on your performance and you don’t want to be the drop score. I made a lot of my own decisions – preparing and schooling – it was all on me, which was a great learning experience. I was both excited and scared. I had competed in CA without Richard, but I am so comfortable there, someone is always around to help if I need it. In Europe I was a foreigner, didn’t speak the language, and didn’t know anyone so I had to go with my gut. There were people on the tour that were helpful, but at the end of the day it was my decision. 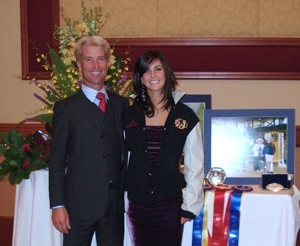 EqSol: Your education, on & off the horse. Start with your equestrian education.
KB: Working with Richard was definitely the graduate school of showjumping. He is the best teacher that anyone could ever have. Not only did he have endless patience and never got mad at me, but always helped me work through the mistakes. He would go out and show me what he wanted me to do, so I was able to visualize and could try to emulate. Richard has a great bond with horses. His genuine nature really taught me to admire the sport through all the hardships and the good times.

EqSol: Now more about your college education and beyond. Your favorite courses, who you are off the horse…
KB: My favorite course at school was Interpersonal Communication during my freshman year. The class was all about the relationships you have with people in your life, on a daily basis and long term. It really heightened my awareness of how actions can affect people. I love philosophy – Soren Kierkegaard is my favorite philosopher. His main theory is that passion comes from within and those that are the most passionate are the most authentic. “The thing is to find a truth which is true for me…” Something I try to live by. I have a passion for education and a passion for horses.

I’m a senior at Loyola Marymount. I plan to go to law school – ideally I will go to Loyola downtown, my second choice is McGeorge near Sacramento. I’m taking the LSATS in December. So I will start in the spring of 2011. My goal is to get a really good education, to gain a new perspective. Not certain if I’ll actually become a lawyer, but if I decide to I can practice law anywhere in the world.

When I came back from the summer tour I knew I had to make a choice to commit to my education or riding. I decided it was time to take a serious look at my education and what I want to do in the world. So I’m taking at least a year off of riding. I didn’t have the time and it wasn’t fair to Richard or my horses. It’s been very difficult to give up the most important thing in my life since I was ten years old. The choice affected me more than I realized it would.

EqSol: We miss you and your parents at the shows…
KB: It is weird to see everyone grow up. Doesn’t seem that long ago that I was riding ponies. There is no doubt that horses will always be a part of my life.

It’s true you don’t know what you have until its gone. I’m so grateful for what my parents and Richard have done for me over the years. We all miss the horses but I’m sure we’ll be back.

Thank you Katherine for spending the time to talk with us. We wish you all the best and hope you’ll keep in touch.