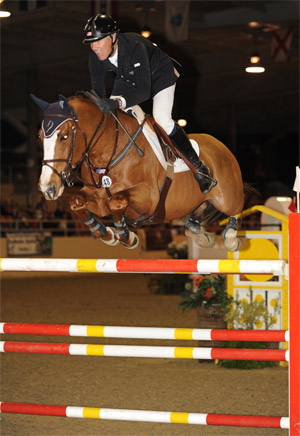 HITS, Inc., together with the show organizers of Blenheim EquiSports, Jump Del Mar, Sacramento International and Langer Equestrian Group, is pleased to celebrate the start of the 2012-2013 qualifying period for the newly formed Thermal Million Grand Prix League. The qualifying season began August 14 and runs through the 2013 HITS Desert Circuit, beginning January 22, where seven weeks of horse shows will culminate in the largest prize money purse ever offered west of the Mississippi. The Thermal Million Grand Prix will be a star-studded conclusion to the seven-week circuit, complete with a musical concert being organized in collaboration with a top entertainment company out of Los Angeles.

Rusty Stewart of Grey Fox Farm in Camarillo, California is one rider looking forward to the start of the qualifying season. “This is a huge opportunity for us on the West Coast to compete in a really big class, and everyone that I’ve spoken to is very excited. I think the collaboration of these shows along with the Desert Circuit is great for the sport. I’m looking forward to getting to work on qualifying and hopefully getting my chance at that big check! This collection of shows is typically our schedule for this portion of the season, we typically hit all the World Cup Qualifiers and this year to have those shows be in coordination with the Thermal Million is just a wonderful thing.”

Stewart has his sights set on qualifying with Bristol, a 10-year-old homebred from Grey Fox Farm. “We’ve brought him along since he was a baby with great success,” added Stewart. “He’s a great horse with a terrific personality, he was fifth in the FEI World Cup Standings for the West Coast, and I’m looking forward to continued success with him this season, right up to the Thermal Million!”

October kicks off with the popular Sacramento International Horse Show World Cup Week, held October 2-7 at the Murieta Equestrian Center in Rancho Murieta, where the highlight of the week’s schedule will be the $55,000 Land Rover Grand Prix of Sacramento, a World Cup Qualifier, Saturday evening, October 6. Three weeks later, Jump Del Mar will offer the next opportunity for riders to capture some cash en route to the Thermal Million when it hosts the Fall Festival II October 24-28, which features the $55,000 Villas at Rancho Valencia World Cup Grand Prix of Del Mar, presented by California Horsetrader, Saturday, October 27.

“We are thrilled to be offering two Thermal Million Grand Prix League qualifying events this October,” said Dale Harvey, Show Manager for Sacramento International and Jump Del Mar. “The Sacramento International Horse Show and the Del Mar Fall Festival are sure to attract the highest caliber of horse and rider combinations looking to secure their spot in the Thermal Million.”

The Langer Equestrian Group, will host the next two qualifiers leading with the $50,000 LEG 40th Anniversary Grand Prix on Saturday night of the National Preview, October 31 – November 4, followed by the Los Angeles National, November 7-11, the highlight of which will be the $50,000 LEGISequine.com Grand Prix of Los Angeles, a World Cup Qualifying event.

“Langer Equestrian Group has enjoyed a very good relationship with HITS, and when the possibility of the Thermal Million Grand Prix League came about I was honored to include LEG’s three premier Grand Prix events in the League,” said Larry Langer, President and CEO of Langer Equestrian Group. “For quite some time I knew the West Coast needed some kind of league to help promote the highest level of our jumper sport, and Tom’s creation of the Thermal $1 Million Grand Prix League exceeded my expectations.”

With just over two months to go before the start of the 2013 HITS Desert Circuit, riders will have one last chance to test their luck and back some more qualifying prize money towards the ranking list when Blenheim EquiSports hosts the final pre-season qualifier at the Las Vegas National, November 13-18. The event will take place at the South Point Hotel and Casino Equestrian Arena, where the $50,000 Las Vegas World Cup Grand Prix will take the stage on Saturday night, November 17.

“This collection of shows represents some of the best show jumping offered in the United States and each of them attracts a diverse mix of talented riders and horses,” said Tom Struzzieri, HITS President and CEO. “This schedule should pave the way for a dynamic late summer/fall season on the West Coast and help to generate great momentum as we await the start of new season in Thermal. I’m thankful to this group for their collaboration and support of something new and exciting for the sport. Hopefully this is the beginning of more great innovations that will serve to benefit exhibitors from coast to coast.”

The 2013 HITS Desert Circuit will begin Tuesday, January 22 and offer a jam-packed schedule of classes, including 16 Grand Prix, three of which will be FEI World Cup Qualifiers, leading up to the Thermal Million Sunday, March 17. The 2013 Desert Circuit prize list is currently in production and is expected to mail in mid-October. Please visit HitsShows.com for more information or to request a prize list.