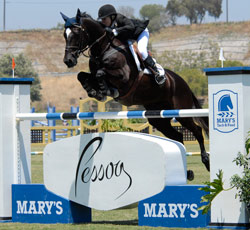 Joie Gatlin rode Camaron Hills Shanroe to yet another victory in the $30,000 Oaks Blenheim June Classic II Grand Prix presented by Mary’s Tack & Feed. At the top of their game both indoors and out, this dynamic duo has collected quite a few wins and top placings this year. With only three of thirty-two starters making it to the jump-off, the course took its toll – a tight time allowed mixed with a few trouble spots including the triple bar at the top of the field and the vertical-vertical combination directly past the in-gate towards the end of the course.

In the jump-off, Peter Breakwell and Lucas left the door open for the next two riders with a tidy time and four faults. Joie shaved more than two seconds off Peter’s time, also with four faults. Along came Simon Nizri and Good Girl. With a practically flawless ride up to the last jump, this pair was a pleasure to watch as they cruised around the jump-off. Unfortunately the last jump was a heartbreaker, as he had the time but jumped the wrong obstacle and was called off course. 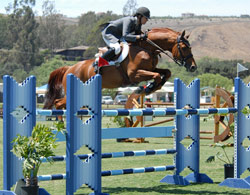 Helen McNaught and Caballo, owned by John Endicott, beat the heat and 26 other competitors to win the $30,000 Copa de Amistad (Friendship Cup) Grand Prix. With six clean, the Scott Starnes course presented a few challenges, including a rollback to a vertical from the hogsback, on to a bending line ending with an oxer-vertical combination. Technical questions asked along with a medium tight time and some unseasonably hot weather narrowed the field to six no-faulters. Second in proved best as McNaught piloted Caballo around with a solid 43.094 that the remaining four couldn’t beat. McNaught said, “I am so pleased! I’ve wanted to ride this horse for six years and finally got to prove what a star he is. This week, Caballo has been super in every class.” 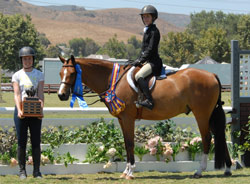 Earlier this month Blenheim Equisports hosted the Trials for the Zone 10 NAJYRC Teams. Last week, the grass fields were covered in ponies as the top West Coast Small, Medium and Larges prepared for and competed in the Zone 10 Pony Finals. Congratulations to Hannah Von Heidegger on winning Grand Champion riding A Hoof and A Prayer and to Mitch Endicott and Buffalo Soldier on earning Reserve Grand Champion. Pony power!