Meredith Michaels-Beerbaum Clinic
Each year as the holidays approach, competition is on the back burner and clinics abound. We cover two in this newsletter, but we know there were also well-attended George Morris clinics up and down the west coast. For those who wrapped up the year learning from some of the world’s best, we commend you.

As mentioned in this issue’s A Stable Story, El Campeon Farms is an ideal setting for equines and equestrians, which holds true for the Meredith Michaels-Beerbaum clinic hosted by Oak Grove Stud on November 20-22, 2009. Combine fabulous southern California weather, great footing, focused riders, devoted auditors, delicious food with Michaels-Beerbaum and the results are remarkable. 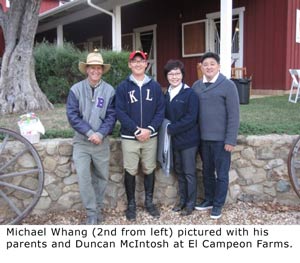 We spoke with several riders who participated at varying heights and observed Sunday’s session. Riding at the 1.20m level, Michael Whang excelled tremendously. Encouraged by his trainer Duncan McIntosh, this was Whang’s first clinic. Kenneth Vinther decided he and his young horse Cagney, who participated in the 1.30m level, couldn’t miss the chance to learn from one of the best riders in the world. Recent winner of the USHJA’s EAP National Training Session and top junior rider Ricky Neal also discussed the challenges he faced during the clinic that ultimately taught him more than the aspects that went smoothly.

Day 1: Friday Focuses on Flatwork
Michael Whang explains, “The theory of forward, back and sideways to explain the specifics of flatwork helped me feel how the horse reacts to the aids, how to become one with the horse.”

“She worked a lot on simplifying the flat work, so whether moving up or collecting, the horse reacts readily from the leg,” commented Kenneth Vinther.

Day 2: Saturday Solidifies Style
Riders maneuvered several gymnastic exercises from a single trot fence to trot in-canter out combinations to four oxers each with one stride in between. Vinther loves how these exercises teach the rider balance and rhythm, and the horse to think and learn from mistakes without the rider’s interference. With Meredith on the ground, it was a tremendous learning experience.

Day 3: Sunday Seals the Deal
The format on Sunday was a culmination of flatwork on Friday and gymnastics work on Saturday, where both horse and rider learned about preparing for what was to come on this final day. Everyone warmed up solo on the flat. Meredith set one jump in the arena for warm-up and instructed each rider to tell her how they wanted to warm up the horse, from type of jump to height to what approach and when they were ready to go. Sometimes the rider was asked about their choices, other times they were advised to alter their warm-up. 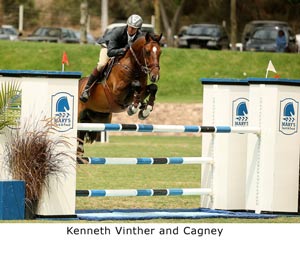 With Cagney, Vinther decided to use trot poles in front of the warm-up jump to achieve a lighter more balanced horse without pulling. Since the young jumper can get heavy, when a strong rebalancing was needed, it was encouraged as long as there was a softening. The results were nothing short of amazing; the horse is bursting with talent. He jumped around the 1.30m course beautifully. Vinther admits that he has the perfect training situation at home. His wife Karen is a dressage trainer, so when he is on the road for CWD the horse is well schooled on the flat.

During the three day event, Vinther learned by both on and off the horse and took home some valuable reminders. “I learned from riding in the clinic, but also from watching the other riders while listening. I was reminded to ‘listen’ to my horse, to not just go through the paces. I have been lazy about correcting his ‘playing around’, but Meredith reminded me to stay focused and be disciplined.”

Whang was pleased with the connection he established with his horse on the flat on the final day. “My warm up on Sunday directly correlated to what I learned on Friday. My horse reacted to it well, he was calm and in my hands, accepting every aid, including my seat.” However the butterflies in his stomach were fluttering at full force when he went to perform in front of his peers and clinician in the arena. The 1.20-1.25m course was higher than he had ever ridden on this horse. After a relatively smooth warm-up his ride began and his nerves were replaced with a keen sense of focus. After he finished a flawless round, Meredith simply said, “There is not much to say about that ride. Excellent. Good riding, good training.”

California-born, now German citizen, Michaels-Beerbaum is a solid example of focus, determination and keen competitiveness. She’s proven her methods are successful through her success aboard numerous mounts, most notably the super-talented Shutterfly. For those who participated and those who watched, it was not only a weekend well spent, but potentially the chance of a lifetime.