Stories from Horse Shows in the Sun
Through my work with EquestriSol I had the privilege of interviewing a number of riders, sponsors and vendors during the 2011 HITS Desert Winter Circuit. Most would agree that with all the improvements, the world-class competition, the hunter prix classes and the World Cup qualifiers, the 20th anniversary year in the desert was definitely one for the books.

Horse show grounds and facilities can be vastly different; however, ask any rider/trainer and they’ll tell you that there are a few key elements that truly make a good horse show. 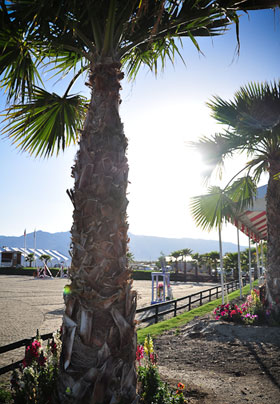 KNOW HOW
For riders like Hap Hansen who has competed at HITS Horse Shows since the circuit’s inception, the shows close proximity to his southern California home is one but not the only aspect that draws him and his clients out to the desert. A man of few words, when he spoke, I listened. ‘Why Thermal?’ was one of my questions.

“There’s lots of room and great footing. I’ve noticed improvements but there is also a more international feel this year. It’s fun to have Meredith here.”

He sums it up by saying, “They (HITS Show Management) know how to put on a horse show.”

GRAND COURSE OR DISCOURSE
A key element riders and trainers consider when attending a horse show, is the course designer. Hap rated them as “up and down.” One week in the $25,000 Grand Prix Hap, John Perez and John Pearce all had spills at the same jump. Certainly a surprising turn of events.

If you’ve read EquestriSol’s series “Conversation with Course Designers”, all of them seek to challenge while being careful to not overwhelm horse or rider. That said the course designers had their work cut out for them – often the class had 50 or more horses with a wide span of experience. It was not uncommon to have the group narrowed down to eight riders or less in a jump off.

For Brazil’s Eduardo Menezes, who jokingly disclosed his mantra for life, while sitting next to Olaf Peterson, as being “Live everyday like it’s the most important or the last because who knows what course designer will be there to kill you.” Kidding aside, Eduardo agreed that the facilities, amenities and most importantly, the footing were all excellent.

With big money classes, a tough course is always on the menu. And like any menu, what tastes great to some is not so delicious for others. Eighteen year old Lucy Davis and her two mounts Hannah and Nemo 119 got their fill of goodies, conquering two weeks worth of course designers’ challenges with four grand prix wins.

I caught up with Lucy after her second victory of four, the $25,000 SmartPak Grand Prix on Hannah during Week V of the circuit. Lucy excelled in field of 57 riders, including topping trainer and well-known international rider Meredith Michaels-Beerbaum,. “I was confident about my ride, but was still in disbelief from last night [winning the $50,000 Strongid CSI-W Grand Prix aboard Nemo 119]! Today was the cherry on top!”

Davis proved her ability to achieve the ultimate, winning two more grand prix classes, including the $200,000 Lamborghini Grand Prix of the Desert again on Nemo 119. Qualified for the Pfizer $1 Million Grand Prix scheduled for September 11 in Saugerties, NY, will the young star be in attendance?

ON THE HUNT TO THE FINALS
Crossing over to the hunter ring, seems the newly added hunter prix classes, qualifiers for the Diamond Mills $500,000 Hunter Prix Final in Saugerties, NY in September, drew both competitors and crowds alike, week after week. 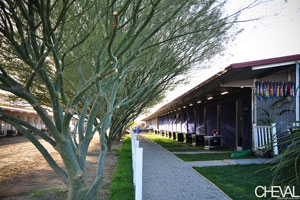 Some would question if a 3’3″ hunter competition with a $500,000 finals is good for the sport. With the response and anticipation of the upcoming HITS weekend this fall, the Diamond Mills Hunter Prix combined with the Pfizer Million, it appears the answer is yes. The competition arena is clothed in many ways, and ultimately the best in the sport will prevail.

John French certainly knows a good horse show, having won all over the world in both the hunter and jumper arenas, both indoors and outdoor. French, who owns Waldenbrook Farm, surmised, “HITS has done a great job on improvements. The footing is good, nice job on maintenance and keeping the ground soft. We’ve had excellent weather this year and more people are coming back.” Waldenbrook clients were happy and staying longer than they initially planned.

As explained in this issue’s “Conversation with Equestrians”, for trainers Hope and Ned Glynn of Sonoma Valley Stables (SVS), the circuit proved to be a hit. Hope landed two blue ribbons in the 3’3″ Hunter Prix classes.

“I am thrilled to have an opportunity to compete for the biggest purse of prize money in hunter history. We have all really enjoyed the hunter prix classes at Thermal,” added Hope.

Top hunter riders, professional, amateur and junior alike, have the opportunity to attend several special shows with a focus on hunters this year. The first is the USHJA International Hunter Derby Finals, now in its third year, at the Kentucky Horse Park in August. Continuing the trek east, the Hampton Classic is an excellent choice for exhibiting and enjoying the east coast. Next to HITS Saugerties for the Diamond Mills Hunter Prix Final in upstate New York, which not only includes a big grand prix but a Temptations concert. And then the indoor season begins, the Capital Challenge in Washington, DC offers a list of prestigious hunter classes, the fall continues with Harrisburg, Washington and this year Lexington. But that’s another story.

Pleasing your public is essential when running a business. Was HITS a hit? The answer is in the desert oasis.