Show Jumping’s Newest Book Illustrates A Matter of the Heart
McLain and Sapphire, Beezie and Authentic, Ian and Big Ben… These are just a few of the great partnerships in show jumping history that are detailed in Jeff Papows’ new book,Unbridled Passion – Show Jumping’s Greatest Horses and Riders. Released by Acanthus Publishing, Unbridled Passion made its formal debut during the Fidelity Investments Jumper Classic, September 14th – 18th. The book documents the incredible relationships between some of North America’s most renowned horses and riders, telling the life-changing stories of their sacrifices for the love of the sport. Through the wonderful highs and heartbreaking lows both in and out of the ring, Papows gives readers an inside look at what it takes to be on top in the competitive world of show jumping. 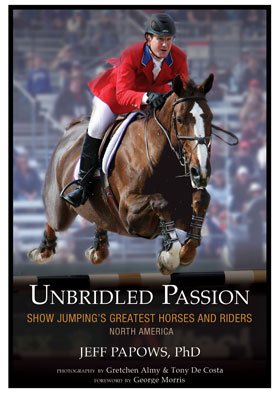 Telling many stories never heard until now,Unbridled Passion gives complete insider views and behind the scenes accounts of some of the sport’s most poignant moments. The book features the awe-inspiring stories of 22 horse and rider combinations, with a foreword by legendary U.S. Show Jumping Chef d’Equipe George Morris, and beautiful photography by Gretchen Almy, Tony DeCosta, and Bob Langrish.

The book’s author, Jeff Papows, is well known in the industry. A “tenacious” equestrian in his own right, Papows has personally been inspired by these athletes and their amazing equine partners. He has been a true ambassador for the sport of show jumping and has helped give the sport the recognition it deserves. As Papows so eloquently described it, the book was “a matter of the heart, born of the need to illustrate how truly special the sport of show jumping is.”

In addition to his successful equestrian career, Papows is known in the world of show jumping for his involvement with the Fidelity Investments Jumper Classic. Papows explained his desire to participate in the sport, stating, “I got involved because of my love of horses first and foremost, and it went on from there. Later I wanted to give back and contribute to the sport, so I became the Chairman of the Jumper Classic, and found other ways to sponsor the understanding of the sport.”

He recalled when the idea first to write the book first came to him. “During the meet and greet panel at the Fidelity Investments Grand Prix every year I saw how thirsty for information the young riders were with respect to their idols, like McLain Ward and Margie Engle, and further how enthused the riders were interacting with them.”

When deciding whom to feature in the book, Papows declared, “The Who was easy. I simply selected the biggest North American contemporary stars then got the idea to add three high level amateur riders as well.”

Papows had his work cut out for him at the beginning, facing the challenge of getting in touch with not only the riders but also the owners, trainers, grooms and many other people that make up the support system of a top equestrian partnership. The sport of show jumping involves a lot of traveling and horses and riders are never in one place for long. The hard work quickly paid off as he saw the overwhelming enthusiasm that the participants showed for his project.

“The travel schedules of the Olympians and the logistics of dealing with people at any point in multiple times zones and continents made it challenging,” Papows noted. “Beyond that the biggest challenge was taking care to be sure that the fresh and real inside stories, not previously exposed, were told in each instance.”

“The easiest part of writing the book was staying on schedule, once started,” Papows added. “Because of the enthusiasm of riders, support givers, owners, Geroge Morris and everybody involved, information flowed like it was coming from fire hoses. People really wanted these horses’ stories told!”

The ups and downs of competitive show jumping made the sport the perfect subject for Papows’ book. The biggest surprise to the author as the book progressed became the pure reality of the stories. 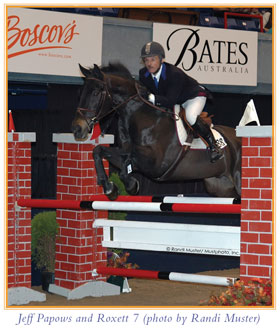 “The content ended up being better than fiction!” Papows expressed. “Case by case the drama, heart break, and inspiration in real life was more incredible than even I with all my friendships with the riders understood.”

The riders themselves are grateful to Papows for sharing the stories of their most treasured horses with the world. Many riders expressed their appreciation personally.

McLain Ward, two-time Olympic Gold Medalist, said it succinctly. “There is nobody in the sport who I trust more than Jeff Papows to tell Sapphire’s real story.”

Grand Prix Show Jumper Debbie Stephens is featured in the book with Cosequin’s CEO. Stephens acknowledged, “Unbridled Passion has shown what no other book has been able to capture, the opening of hearts for everyone to see, the real story between horse and rider.”

Grand Prix rider Kent Farrington and Up Chiqui are featured as well. Farrington explained, “Jeff has captured the real story of Show Jumping. It goes beyond all the victories and the frustrations. Jeff tells what the sport is truly about – having a special bond with a horse.”

An inspiration to many in the sport, nine-time Olympian Ian Millar summed it up perfectly with his praise for Papows, “Jeff is both rider, friend, and perhaps one of the sport’s most articulate voices – he tells our stories beautifully.”