Stefanie Saperstein
A name we haven’t heard lately on the west coast is that of Stefanie Saperstein. The rising young star went overseas mid-year to soak up some serious European exposure. She is fully ensconced there, not only as a rider but a student as well.

Before she left on this incredible adventure, Stefanie sent us this exclusive, endearing piece about riding in a World Cup Qualifying class like the ones you’ll be watching this season. Enjoy the ride as she takes you along with her that night – it will bring tears to your eyes…

World Cup Qualifier – November 2009
I barely slept the night before. Fear and excitement kept me awake.

That night was a World Cup Qualifier, one of the few that Quanto and I had ever done, and considering it was one of the last of the year I knew it was going to be a challenge.

I got on Quanto to stretch him out before the class and I couldn’t help but think about what the little boy had done for me and how I owed him the same. He brought me to a level of competition that I had dreamt of my whole life, but never thought could be possible. That night I needed to forget about everything else and fight for him, as he always fights for me.

The night of competition I put on my show jacket and started to polish my boots as I listened to music and cleared my mind. I heard the announcement that the course was ready for walking and ran to give Quanto one last hug and kiss before heading to the ring.

I walked the course a few times on my own and then met up with Meredith [Michaels-Beerbaum] and Richard [Padilla] to discuss my plan. Meredith emphasized parts of the course that I needed to focus on, walking with me to tall verticals that seemed to tower over both of us.

As the class started, I stood behind the bleachers going over my plan in my head reminding myself that it doesn’t matter how different it is from the other riders’.

My sister Alexis inched towards me. The last time she saw me ride was over two years ago, so having her there further encouraged me. I took a quick picture with her, as we both smiled at my grandmother who was in the same box as my mom. I remember closing my eyes and being so thankful for the support that I have; the people and animals that will continue to love me no matter what happened that night.

When I was twelve rounds out, I caught sight of Guma (our fabulous groom) with Quanto and walked over to them. I asked Guma about how Quanto was and he gave me the same response as always, “He is ready to win.” I giggled and responded, “I hope I am ready to win” and as Guma helped me on he assured me that I was.

The warm up felt surreal and I was called up to the ring in what felt like seconds. I stood outside of the ring and retold Meredith my plan and she wished me good luck. I asked Richard if he thought I could do it and he replied, “Of course, it doesn’t matter how it looks, just get it done.” This is what he always says to me before going into the ring. For some reason knowing that I don’t have to “look good” is always so encouraging. As I was about to head in the ring Richard continued to ask; “Do you know how I know you are going to do great?” I asked him “How?” He simply smiled and told me to listen. And with that I entered the ring. As I trotted in I heard the Bob Sinclair song “Love Generation” which Richard knows is not only one of my favorite songs, but the one that reminds me the most of competing in Europe during the summers.

As the ring went silent and I picked up the canter, I had a smile on my face, and I knew that Quanto could feel it. We feed off of each other’s confidence as we ride around the course. I added in the first line to keep Quanto’s shape, which carried over to the rest of the round. I kept reminding myself of the time allowed, trying to stay tight through the turns while keeping a forward rhythm. There was a tight five to a tall plank bending to a triple bar- oxer double, and Quanto jumped so powerfully over the triple bar that I tapped him on the shoulder with my stick to help him get over the next oxer. 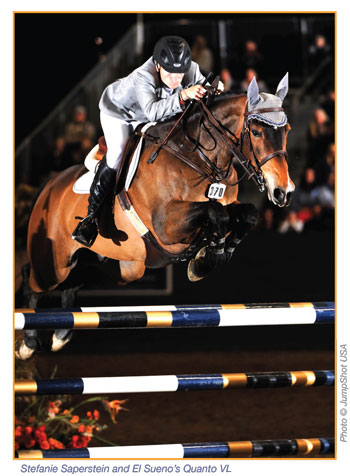 Everything was coming up so fast, but I never felt nervous, I felt as though I was watching myself the entire time. I steadied Quanto up for the skinny, a fence that we often struggle with and he jumped it with ease, allowing me to shape out the following lines. Each fence kept Quanto’s attention as he jumped over them and refused to touch a rail. I was one with him and it was unbelievably powerful. I was galloping to the final line and had to set Quanto up, as it was a careful triple combination and he was already moving at such a fast pace.

He came back to me so easily; it was shocking, and he jumped through it as well as any of the top horses out there. I continued moving to the final oxer in five strides and soared over the last fence, an instant that could easily have been eternity. The fact that I hadn’t had a fence down didn’t go through my mind until I heard the ‘victory’ music play after going through the timers. The feeling I had at that moment is almost impossible to explain.

I fell onto Quanto’s neck knowing that it was only the second time we had gone clear in a qualifier. As I left the ring my whole body was shaking. I looked over at Richard, I thought I was going to cry. He held back his emotions as he reminded me to go to the stewards to weigh Quanto’s boots.

A few tears escaped my eyes as my mother and sister ran to congratulate me on going clear, Meredith and Richard brought us all back to earth as they called me over to discuss my jump-off. Quanto and I had one more job left, and we couldn’t forget that. I knew that the other people that had gone clear were Nicole Simpson, Will Simpson, Richard Spooner and Rich Fellers, four of the riders that I admire most in the world. Just being in a jump off with these riders felt unreal to me, but I still wanted to give it a go.

My plan for the jump-off was to make a few inside turns and to gallop to the last fence. As I cantered into the ring I refused to think about the time that I had to catch or what I would have to do to win, all I wanted was to give Quanto the ride that he deserved. We ended up going clear again but were not as fast as Richard or Will, two riders with abilities that are awe-inspiring to me.

I saw Guma being congratulated by other grooms and I helped him put Quanto’s fourth place ribbon on. I remember Guma telling me that I was his winner for the night and that I am “with the big guys now.” I didn’t even know what to say, so I just gave him a big hug and thanked him, reminding him that none of this would be possible without him.

During the awards presentation and the victory gallop Quanto was having the time of his life. I turned him around while the flag was raised, because the excitement seemed to overwhelm him. When I was facing the people in the bleachers I made eye contact with a young girl who told me that Quanto was her favorite horse, and then her mother continued to say, “I will see you in the Olympics.” At that moment I felt that my work and the help that I had been so blessed to receive were all coming together.

Soon after, I was congratulated by my family, tackled by my sister and then whisked off to the autograph table. As I sat down, I remembered when I was younger and would ask for the autographs of some of the riders sitting next to me, and I couldn’t believe that I was actually there myself.

I signed a girl’s shoes and a boy’s shirt, but what meant the most to me was seeing my sister in the line gleaming with a poster in her hands. As she walked through the line she was telling everyone that I was her sister, and as I signed her poster she leaned over the table and told me, “I am so proud to be your big sister.”

I got up and gave her the biggest hug I could and saw my family over her shoulders. My mother was talking up a storm with everyone, but my grandmother was standing there silently staring at me with tears flowing out of her eyes.

As the autograph line ended I got up and walked straight to my grandmother, I held her in my arms as she told me in Swedish about how happy she was to be alive here with me. I kissed her over and over again, then wished her goodbye as I had to drive back to school for class on Monday.