In the hunter divisions at Capital Challenge, Rumba (Mountain Home Stables, former owner) and John French were Grand Champions when they topped the Second Years and On Top (Laurel Ridge Sport Horses) with Keri Kampsen aboard earned Reserve in the Regular Working.

Links Not to be Missed

The story and scenes from Blenheim Farms with RJ Brandes, Richard Spooner and George Morris.

“The AHP’s member publications, web sites, and newsletters reach nearly 3 million people involved in the horse industry in the United States and around the world,” said Kimberly S. Brown, current AHP president. “We think this is a great opportunity for us to use our collective resources and reach into the horse industry to get answers about how we are doing today, how we think we’ll be doing in the near future, and what we are concerned about in our industry.”

Clinics Coming to Town
Before Santa comes you can give yourself an early Christmas present by participating in and/or auditing at two upcoming clinics. Names synonymous with the world’s best in the sport: Meredith Michaels-Beerbaum and George Morris will both be in SoCal hosting clinics at two beautiful locations.

July 22nd
Wednesday’s warm-up competition offered us our first chance to school our horses in the newly renovated stadium at the Kentucky Horse Park. The course, set by Olaf Peterson Jr., consisted of eight obstacles. Once in the ring, each competitor was granted 90 seconds to jump as many jumps as they wanted in whichever order they liked best. The majority of my Zone 10 junior team opted for a shortened version of Olaf Jr.’s course which allowed us to school both the open water and the double without fatiguing our horses too much, as we had a long week ahead. Despite the wet weather our team came away from the warm-up competition in top shape, excited for the week to come.

July 23rd
The championships began on Thursday for the Juniors with a one-round competition against the clock. Because Sunday’s winner would be determined by faults only, the emphasis was on clear rounds and only clear rounds. The first Californian in was Samantha Harrison, who set an excellent example for the day with a confident clear round, just under the time allowed. I was the next rider to enter the ring from Zone 10, aboard my Oldenburg gelding Luke Skywalker S. Luke cantered around the ring with great confidence and I was able to steer him around the course without any rails coming down. The rest of my teammates from Zone 10 followed suit, and at the end of the day the scoreboard reflected the hard work each one of us had put in order to qualify for the Junior team; Annie Cook and Gina, the alternates for the team, led the victory gallop, while placings 4th-7th went to me, Alec Lawler, Taylor Siebel, and Samantha Harrison, respectively. With five riders in the top ten, our Zone 10 team quickly became the favorite for Friday’s team competition, and we would not disappoint.

July 24th
Friday’s team competition consisted of nine teams jumping the same course twice, with a jump off to determine the winner in case of a tie. Olaf Jr. set a long, challenging course for the two round competition, but after Thursday’s success, our team felt confident, comfortable, and prepared for the day’s challenges. As Zone 10 drew first in the order of go, our lead off rider, Samantha Harrison, was the first to enter the arena. As she did the day before and as she would continue to do all week, Sam posted a relaxed and effortless clear round, much to the delight of Zone 10’s cheering section, which was to be rivaled only by the hoots and hollers of the adjacent Mexican cheering section. Following Sam’s lead, Taylor Siebel posted another fault free score, giving Zone 10 the only two clear rounds in the class thus far. Next to show was Alec Lawler, who completed the difficult course with a respectable 8 fault round. Already with a definitive lead in the competition with only 8 faults, there was little pressure on me as I walked into the ring as Zone 10’s anchor rider. Luke again cantered around the course with ease and again the jumps stayed up, giving our team a total of 0 faults, being tailed only by Zone 2 with a score of 12. 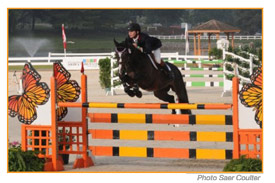 As anyone can tell you, however, team competitions are often fickle in nature. Although Samantha started the second round with a fault free round, both Alec and Taylor had 12 faults each, and following two clear rounds from Zone 2, we found ourselves in a tie for the lead after three of the four riders had gone. Because Zone 2 had a drop score of 20 in the second round, they needed a clear round from their anchor rider, Kaitlin Cambell, in order to win. As Zone 10’s anchor rider, I knew that my score would mean the difference between gold and silver for our team, but I first had to see how Kaitlin would do. On the way to the in-gate, Kaitlin’s eye caught mine. “Good luck”, I offered, with only the slightest hint of sarcasm. “Yea, no pressure,” she shot back with a smile. Yet despite the lighthearted banter, Kaitlin was all business when she walked into the ring. Some 80 seconds later, Kaitlin crossed the timers to the thunderous applause from Zone 2’s cheering section having completed the course fault free, giving Zone 2 a grand total of 12 faults. As the announcer so thoughtfully summed up the situation as I entered the ring “The pressure is on.” Once in the ring, however, cries of encouragement from Zone 10’s cheering section pierced the stadium and reminded me that I wasn’t completely alone. With my nerves conquered, I began the course with the same confidence and focus which I had had during the first round’s ride. The handsome Luke Skywalker again rose to the occasion and cruised around the course without any problems, leaving all the poles in the cups.

The fun was not yet over, however, as we now had to jump off against Zone 2. Zone 2 started the jump-off, and their first rider posted a quick four fault round. Samantha Harrison, who deserves a nickname for her stone cold consistency throughout the team competition, loped around the shortened course, leaving all the fences up. The next two riders for Zone 2 had eight faults each, allowing Alec and Taylor to finish the day with each posting four fault rounds, giving us a worst case scenario score of 8 and Zone 2 a best case scenario score of 12, meaning that it was not necessary for either Kaitlin or I to jump off. With a total of 8 faults in the jump off, Zone 10’s Junior team won a gold medal for the third year in a row. The hard fought victory left me, Taylor, Sam and Alec hungry for more, and each of us will undoubtedly be back to the championships in years to come.

Ricky Neal is 17 years old and has been riding since age 5.  He trains with Dick Carvin and Susie Schroer at Meadow Grove Farm and currently has three horses – Texas, Larina, and Luke Skywalker S.  Ricky recently won an individual bronze medal as well as a team gold medal at the NAJYRC aboard Luke Skywalker.

Luke is a 9 yo Oldenburg gelding, bought in September of 2008 but not shown until 2009 HITS DC because of an injury.  He qualified behind Larina for YR, so Ricky originally planned to leave him at home, but when he performed well at Spruce Meadows he decided to bring him instead, despite his lesser experience. Good decision!