This week, while we junior hunter riders were reduced to showing in the dirt arena at the far end of the horse show grounds, the pony kids took center stage, galloping around the open grass field that sits between the Grand Prix field and the food area. This was appropriate, however, as the Oaks Blenheim June Classic III was home to the Zone 10 Pony Hunter Finals. 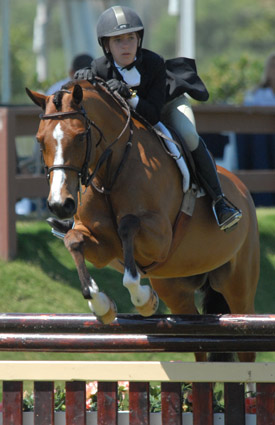 Always a fun class to watch – those pony kids are so adorable and such amazing little riders – the Zone 10 Pony Finals is open to all pony/rider combinations, and has three phases: model, under saddle and over fences. Ribbons are awarded to twelfth place for each phase, along with a champion and reserve champion for each height section, and an overall champion and overall reserve champion.

This year’s overall and large pony champion was Hannah Von Heidegger on A Hoof and a Prayer. Along with A Hoof and a Prayer, Hannah, 11, rides several other ponies and horses, and was gracious enough to answer a few questions I had about this event.

Laura: How long have you been riding?
Hannah: I’ve been riding since I was three, and began showing in the short stirrup when I was six.

Laura: A Hoof and A Prayer is a large pony, how long have you been showing in the larges?
Hannah: I just started doing them at the beginning of this year.

Laura: Tell us a bit about your pony, A Hoof and a Prayer.
Hannah: I got A Hoof and a Prayer (his barn name is Happy) last fall, and started showing him this year. He is pretty smooth, has a long stride, likes long distances, and takes me to the jump a little bit. He’s a little different to ride than my other ponies because you have to keep more pace in the corners.

Laura: What is he best at doing?
Hannah: He’s best at jumping. He has a great jump!

Laura: Did you show any of your other ponies at Zone 10 Pony Finals? How did it go with them?
Hannah: I showed Simply Magical (in the mediums) as well as A Hoof and a Prayer. Simply Magical got an 86 in the model, and 86 in the hack, but in the jumping I got a score of 63. I had a little bit of a mishap. I moved up too much to the distance, and ended up chipping. So, on A Hoof and a Prayer, I tried to be a little more patient and visualized my course before I got on and imagined what it would look like in the ring.

Laura: That’s awesome that you were able to fix your mistakes and do so well on Happy! How are Simply Magical and A Hoof and a Prayer different?
Hannah:On Simply Magical you just have to stay steady through the whole course and can find the distance pretty easily. Simply Magical is also pretty slow, you have to make sure he doesn’t slow down too much in the corners, and that he doesn’t cross canter.
Laura: Do you have any strategies for modeling your ponies?
Hannah: I try to wait until the judge is a couple of horses away so my ponies don’t move when the judge is watching, and I make sure I have a cookie or mint in my hand to keep my ponies’ ears perked. Luckily, both my ponies are great modelers so they are not hard to model.

Laura: What do you think about riding on the grass?
Hannah: I like it! It’s different, because it is bigger, but it’s fun to be in such a big ring on a pony. You have to have more patience to ride on the big field, which makes it harder. Sometimes, if you’re impatient and try to chase down the jumps on the big field you end up chipping. They also had long bending lines in the courses, which I liked, because they tested your eye.

Laura: What are your riding goals for this year? The future?
Hannah: I’d really like to be champion on one of my ponies at Indoors this year. It would be great to be the first to win Zone 10 Pony Finals twice in a row. I would like to start in the junior hunters next year.

Thanks for your time, Hannah, congratulations, and good luck with your riding goals.

Laura Listens is brought to you by Laura Ware. Winner of the 2007 LAHSA Junior Medal Finals and a recipient of the 2008 WCAR Jumper Rider Grant, Laura rides with First Field Farm and often trains with Archie Cox. She is very successful in the all three disciplines on her own mounts as well as catch riding other horses.