More on the North American Riders Group
This young yet robust organization seems to have a big stride and a great jump. Since forming in March of 2009, founders McLain Ward, Chris Kappler, Norman Dello Joio, Jimmy Torano, Kent Farrington and Beezie Madden added influential names to the Board, including Will Simpson, Andre Dignelli and successful CEO Murray Kessler. As of this year yet another powerful CEO, Hunter Harrison joined NARG as special liaison for Horse Show Management. An avid supporter of the sport, Mr. Harrison serves in an advisory position for several world-class equestrian events, including Spruce Meadows, The Global Champions Tour and the Winter Equestrian Festival. Dynamo Jen Markee serves as Executive Director. Clearly they represent a group that essentially makes the show jumping world turn – the owners, riders and trainers.

Serving the equestrian world as an activist and lobbying group that seeks positive change through action, each Board Member puts their money where their mouth is. Seeking global changes that start at the source, besides contributing countless hours to achieve collective goals (more on that below), each Board Member contributed a minimum of $5,000 to the organization.

The achievements this active group has accomplished illustrate that NARG seeks to work with, and preferably not against, the governing bodies and horse show managements.

AN AWESOME ANNUAL
On February 1, 2011 NARG hosted their third annual meeting at the Wanderers Club in Wellington, FL. Several hundred owners, riders, trainers, managers and members of the press attended and were duly impressed.

Kessler Opens, Simpson Engages
Murray Kessler opened the meeting, reminding the audience of NARG’s mission to “unite professional riders and trainers to use their collective strength to make show jumping in North America the best in the world.” He then introduced Board Member Will Simpson, who went well beyond reviewing the NARG 2010 accomplishments; the Olympic Gold Medalist engaged and entertained the group with his narrative. During his descriptive tale, he mentioned how the management team from Equestrian Sport Productions had already responded to NARG “At WEF every ring has great footing, and you can hear the horses from here saying ‘thank you, thank you, thank you’.”

Onward and upward, NARG had a busy year nationally and internationally. The group re-submitted a prize money alignment rule change to the USEF that would uphold an avid NARG belief that like in other sports, the top level earns the biggest purses; continued discourse on the Mileage Rule; weighed in on the water jump debate; created a recommended course designers list; addressed the United States Olympic Committee regarding the top level of the sport; supported McLain during the incident at the 2010 FEI World Cup, including legal assistance, distributed the Young Riders handbook written by Kim Land which should ease some NAJYRC confusion, worked to get Katie Prudent elected to the IJRC (International Jumping Riders Club) Committee plus developed and presented evaluations to horse shows that resulted in significant improvements at major events like WEF, Hampton Classic, Devon, and the Pennsylvania National Horse Show (PNHS). This initiative led to the inaugural NARG Top 25, a list of the top 25 horse shows in North America. Before NARG announced the results of that year long effort, several more important people addressed the crowd.

Doubleday Delineates, Prudent Will Persevere
Next Simpson invited Peter Doubleday to speak. A long standing name in the sport, Doubelday explained how NARG influenced the PNHS Board, which has a large share of non-equestrian Members, to make some marked changes this year – notably a major investment in improving the footing as well as increasing prize money and improving award ceremonies. He encouraged other events to consider changes to improve the overall experience, ultimately to make North America’s top shows some of the best in the world.

Katie Monahan Prudent spoke about her election to the IJRC. She spoke candidly about how the FEI’s actions against McLain during the 2010 World Cup had ‘damaged our sport worldwide’. She felt that the incident was not only ‘disgraceful and unjust’ but there was no unity among the riders. These negative aspects mixed with her strong desire to improve the sport, increase support and introduce NARG’s ideas are the driving forces behind accepting her new international position.

Ward Remembers, Morris Insists on Excellence
McLain Ward approached the microphone. As painful as it may be to relive the nightmare he experienced through the unbelievable elimination of Sapphire in Geneva, he actually had some positive perspective. Ward commented on how good can come from bad, and that the unity he felt via NARG’s support during a difficult time was both effective and personally moving. “It was like having a bunch of pit bulls in my backyard. It was phenomenal.”

Ward then introduced a video where Board Member Jimmy Torano interviewed the iconic George Morris. With vintage images woven into the piece, the two generations spoke about what has become of our sport. When Morris speaks people listen and he insisted on excellence – to eliminate the ‘limited’ mentality, to put quality first, always be open to learning, pay attention to the details – no shortcuts, and don’t lower standards. He addressed both the trainers and the horse show managers for the notable decline and commented on how we need to re-establish meaningful breeding and horse sales in this country. Acknowledging the challenge of his decree, and even his own admission of succumbing to the ‘sexiness’ of traveling to Europe to buy horses, Morris upheld that the excellence factor is truly how ‘together we can improve our sport’. Board Member Norman Dello Joio then addressed the crowd with comments that reiterated the Morris message and ended with the explanation that “NARG is working hard to restore greatness to North American horse shows with their Top 25 initiative.” Which led to the big announcement.

The NARG Top 25, Winner & Special Guest Speaks
Via volunteer evaluators, NARG quantitatively analyzed over 50 horse shows last year. After numerous Board meetings to discuss the final results, NARG developed the Top 25 of 2010. Murray Kessler returned to announce the top events and to explain the importance of this effort. Labeling it the horse show version of Consumer Reports, he emphasized that although it is an honor to make this list it is important to note that after the top four shows all scores were below 80%, effectively a B- or lower. Certainly room for improvement. NARG feels that the key to improving our sport lies within this competitive structure and they seek to work with and not against horse show managements.

With a score of 92%, Kessler proudly announced the number one equestrian events in North America, the Spruce Meadows Summer Series and Masters. Linda Southern-Heathcott and Ian Allison were present to accept the award. Stepping up to speak, Heathcott admitted that she has not been to Wellington for quite a few years (25 give or take) and that the management here has done an incredible job with the venue. 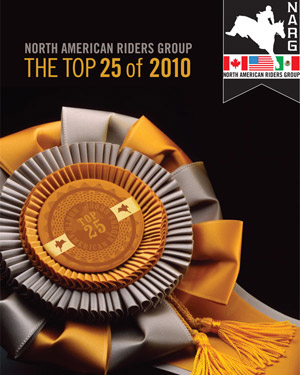 She said the NARG evaluation of Spruce was constructive and candid, essentially appreciated. Heathcott further inspired the audience by relating that several decades ago Spruce Meadows was her father’s vision and dream. That is how it starts. The Southern family ignored the naysayers who claimed no one would come to Canada, and that this vision of hosting some of the world’s top equestrian events would never work. She concluded by claiming, “There is no can’t, you can.” View the full Top 25 Report here.

Kappler Concludes
NARG President Chris Kappler wrapped up the meeting by highlighting NARG’s goals for 2011. They will again focus on their top 25 ranking as a way to continue to help North American horse shows improve, support the mileage rule and prize money realignment rule modifications, listen to their members – at their request NARG has added three open member meetings for 2011: At WEF on February 17, 2011, another at the Hampton Classic and a third on the West Coast (location and date to be announced). Kappler added that in 2011 NARG was creating an owner’s initiative with a goal to bring back the pride in owning a horse for our nation’s top riders. He closed with thanking the group for attending and asking for their continued support. He encouraged everyone to join and to be a part of shaping the future of show jumping. He ended with the resounding message of the evening “Together we can improve our sport.”

To find out more, go to NARG.org. Several in depth articles are also on PhelpsSports.com.