In the hunter divisions at Capital Challenge, Rumba (Mountain Home Stables, former owner) and John French were Grand Champions when they topped the Second Years and On Top (Laurel Ridge Sport Horses) with Keri Kampsen aboard earned Reserve in the Regular Working.

Links Not to be Missed

The story and scenes from Blenheim Farms with RJ Brandes, Richard Spooner and George Morris.

“The AHP’s member publications, web sites, and newsletters reach nearly 3 million people involved in the horse industry in the United States and around the world,” said Kimberly S. Brown, current AHP president. “We think this is a great opportunity for us to use our collective resources and reach into the horse industry to get answers about how we are doing today, how we think we’ll be doing in the near future, and what we are concerned about in our industry.”

Clinics Coming to Town
Before Santa comes you can give yourself an early Christmas present by participating in and/or auditing at two upcoming clinics. Names synonymous with the world’s best in the sport: Meredith Michaels-Beerbaum and George Morris will both be in SoCal hosting clinics at two beautiful locations.

The time has come for the anticipated 2009 Adequan FEI North American Junior / Young Rider Championships (NAYJRC), presented by Gotham North, at the Kentucky Horse Park. After undergoing a complete redesign for the 2010 Alltech FEI World Equestrian Games (WEG), qualified young riders have the honor of competing on the same turf as the 2010 WEG competitors. 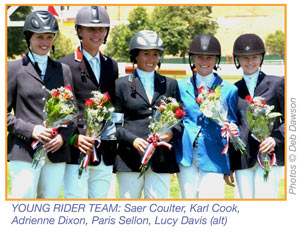 Although each of them had garnered qualifying points before the show, all were acutely aware how important their results were at the Blenheim June Classic I, June 23-27, 2009. With the chance to gain valuable points, Sunday’s class was mandatory, scored at 1.5x and consisted of two rounds. All agreed Linda Allen’s course was big and technical. Professional Jenni Martin McAllister concurred. Also competing in the 1.45m class that served as a qualifier, she commented, “It was a difficult course. My mare who shows at this level was impressed, as was I.”

Ricky: Although intense, it’s nice to compete in a similar format to NAJYRC. No other zone does qualifying like ours, so we are prepared for what’s to come and I think it shows.

Lucy: It’s nice to be rewarded for consistency and make the team, as well as for riding well under pressure. Last year I qualified because I won on Sunday, this year today was not my best day.

Paris: I was leading coming into this week, but I had a rough time Thursday and Friday. Today was my best day and it was similar to what we’ll see at Young Riders, so that feels good. 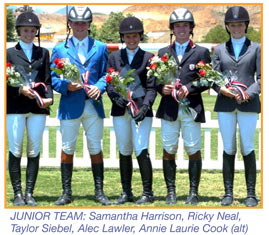 About making the team:
Qualifying was a top priority for all three riders – they planned their 2009 show schedules around it. They all look forward to competing at the WEG facility.

Ricky: It’s nice to see who made the teams. The competition was tough and I think we have some of our best on both teams. Paris: We did go through a lot this year to qualify, but I think it will pay off.

Lucy: Last year I learned so much. It’s one of the few shows where we get to be there the entire week (no school) and we are able to spend more time with our horses, our friends and focus on just the one event.

And one more…
LEG Up News shared teammate Adriene Dixon’s excitement about making it to NAJYRC.  “This is my first and last shot,” said Dixon who is riding at the maximum age of 21.  “It was make or break and I am so excited. I feel like Young Riders is a really important step to being a legitimate jumper rider.  If you can get to the Championships then you have really accomplished something,” commented the U.C. Davis student.

To prepare for the rigors of the championship, Dixon said that she and her trainer, Buddy Brown focused on endurance for Pom Pom.  “Buddy really focuses on all the details.  He knows I can ride, so he helps me with the little things.” Dixon hopes that all those little things will add up to big performances this week.

About the NAYJRC course designer, Olaf Petersen Jr.:
Olaf designed last year and will return this year. All riders agreed Olaf builds tough and technical courses. Lucy and Mister Mind did not drop a single rail in 2008 – the pair rode five clean rounds and were the only ones to do so.

More About NAJYRC:
Since 1979, these Championships have showcased the best young rider and junior horse/rider combinations in the three Olympic disciplines of Dressage, Eventing and Jumping. In 2008, the Western discipline of Reining was added, bringing the best young athletes, ages 14-21, in four of the high performance equestrian disciplines together for the first time.

Show jumping teams are invited from the twelve Zones in the United States, each Canadian Province, Mexico and the Caribbean to compete for team and individual medals. The Championships are designed to mirror the competition format used at the Olympic and Pan American Games. In addition, the Championships offer riders the opportunity and experience of competing as a member of a team. (Adapted from youngriders.org & usef.org)