West coast riders come east for Pfizer Million Weekend; HITS bids to bring Olympic Trials to HITS Desert Horse Park
As the summer show season nears its end, the excitement and anticipation for this year’s Pfizer Million Weekend is gaining momentum. Exhibitors are clamoring to get their qualifying classes in and add to their winnings to ensure their place in the Rider Rankings for both the Pfizer $1 Million Grand Prix and the Diamond Mills $500,000 Hunter Prix Final. After the Desert Circuit it was clear that riders from the west coast were serious about ensuring they’d make the cut for these two monumental events. And with the grand finale weekend just about a month away, west coast riders are making their plans to come east for their chance at show jumping history – the opportunity to compete for $1.5 million in prize money! 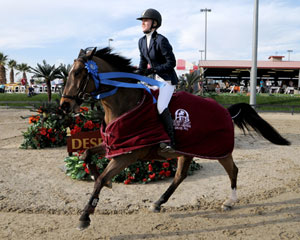 The group of High-Performance riders coming east includes a mix of both returning and first time qualifiers with John Pearce, Helen McNaught, Duncan McFarlane, and Saer Coulter, while young phenom Lucy Davis, who took the Desert Circuit by storm when she won the last four Grand Prix at the Thermal including the $200,000 Lamborghini Grand Prix, presented by Lamborghini of Newport Beach, is making her first trip to Saugerties.

The crop of Hunter riders making their plans to show in Saugerties is equally as impressive with top professional riders John French, Hope Glynn, Nick Haness and Jenny Karazissis each committed to show in the Diamond Mills Hunter Prix Final. Amateur riders Erin Bland and Avery Hellman, who both train with Ned and Hope Glynn, will also be on the scene, as will Archie Cox with a group of his students.

“I am very excited to be coming to compete in the [Diamond Mills] $500,000 Hunter Prix,” said Cox. “Cruise, owned by Jessica Singer, has already proven himself from coast to coast and I am anxious to add a top placing to his resume.” 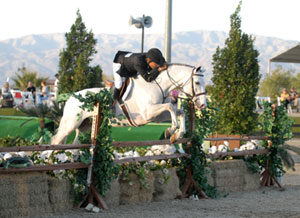 There’s quite a buzz about the weekend throughout both the equestrian and local communities, as VIP tables are selling quickly and ticket sales for Motown legends The Temptations are picking up momentum. Adding to the ceremony of the day will be an appearance by the West Point Equestrian Team and a special 9/11 commemoration ceremony with members from the local fire, police and emergency service workers. Plans are also in the works for a special head-set rental program for round-by-round commentary for both the Hunter Prix and the Pfizer Million.

More exciting news pertaining to live-webcasting and TV coverage along with other plans will be announced soon, so stay tuned. For more information about VIP or general ticket information, please visit HitsShows.com.

HITS bids to bring Olympic Trials to HITS Desert Horse Park
For the second time in two years, HITS put in a bid to host a USEF selection trial competition at the HITS Desert Horse Park in Thermal, California. In the summer of 2009, HITS bid to host the USEF Show Jumping Selection Trials for the 2010 Alltech FEI World Equestrian Games (WEG). The proposal included unprecedented prize money, $775,000 to be exact, and a commitment to waive the entry fees for all Selection Trials classes for horses competing in every leg of the Trials. This time around, HITS submitted another extraordinary bid proposal to host the USEF Selection Trials for the 2012 Olympic Games and National Championship.

The highlights from the Olympic Trials bid included $200,000 in prize money to be divided among the winners, waived entry fees and complementary accommodations for all exhibitors participating in the trials. News came in early August that the selection committees had met and voted to award the bid to another management company, despite the innovative package prepared by HITS.

When news of the decision came, HITS President and CEO Tom Struzzieri offered his insights on the vote. “If there’s a bright side to this, we’ve got our bid packet fine tuned! Perhaps more importantly, these Trials will not take place during the Thermal Circuit, so customers can enjoy their regular circuit schedule with us in the Desert and still have the opportunity to travel for the chance to compete on the Olympic Team in Florida at the end of March.”

Struzzieri was pleased to have the opportunity to submit a bid and was pragmatic about the outcome. “I can’t say that I disagree with the decision of the committees, geography has to play a big role in this type of decision. We will continue to stay in this process and hopefully we will be awarded this type of event in the near future.”

In the end, Struzzieri believes, “Our bid had an impact in raising the stakes for the competition. As it turned out the other bid was modified to match what we had offered and include free entries for the riders, so that’s another positive outcome for the exhibitors. Having just completed hosting the East Coast Junior Hunter Finals here in Saugerties, I feel strongly that HITS has a product to offer that will ultimately be the right one for trials of this nature and we’ll keep going after it… for us, our customers and the sport.”