The ASPCA Maclay Horsemanship class was first held 76 years ago, and has remained one of the most prestigious competitions for junior riders (ages 17 & under). Past winners and top finishers include recognizable West Coast names such as such Bernie Traurig (1961), Fred Bauer (1970), Francie Steinwedell-Carvin (1977), Lauren Kay (1990), Keri Kampsen (1997), Nicole Shahinian Simpson (1992), Richard Spooner (Reserve Champion, 1988), Matthew Sereni (2003) and Jamie Taylor (Reserve Champion, 2002). Riders who competed in the Region 8 (CA, HI, NV) Maclay Regionals on Saturday qualified by earning 25 points as of August 31, 2009.

Medal riders had to pick and maintain a marching pace to master the course that Scott Starnes set for Saturday night’s Regional Finals. Of the twelve efforts, the toughest part seemed to be fences four through eight, which included a short turn off the corner to a hay bale vertical in three long strides to an oxer-vertical one stride directly to another three stride line, followed by a right hand turn to vertical-vertical one stride combination to a sharp right bend in a long five to a fan oxer. 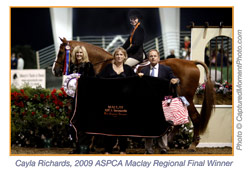 After thirty-four rounds, judges Chrystine Tauber and Leo Conroy brought back twenty-eight riders in two groups of fourteen for the flat phase. In this final the flat counts for 50% of the total score. At the conclusion of the second group, five riders were asked to remain in the ring – Jocelyn Neff, Lucy Davis, Saer Coulter, Theo Boris and Cayla Richards. The work-off included six jumps, a difficult counter-canter turn, a halt and a hand gallop to the last fence. Neff nailed it. Surprisingly Davis had some trouble that included losing her counter canter. Coulter also lost the counter lead in the final two strides. Boris rode in his usual soft yet confident style. However his halt was a bit brief and his bold hand gallop took him slightly past his distance. Fresh off her CPHA Medal Final win, Richards kept her cool and performed all the tests flawlessly for the win.

Click the results link for a list of the 16 top placings, who are invited to compete at the National Championship held at The National Horse Show on October 31st in Syracuse, New York. Good luck to all those who are heading east later this fall.