After a busy summer season of ad campaigns and newsletters, we look forward to completing the development of a number of web sites waiting in the wings. Look for announcements of these new designs later this fall.

We spoke with a few more of our horse show greats – see our Conversations with Equestrians on Mary Manfredi and Saer Coulter as well as our chat with Jack Robson. We wrote a little piece on the BIG Eq begininings and sized up the lowdown on Indoors.

We thank you all for the newsletter praise. It’s always great to hear. See you at the shows!

Interesting how life is – how things have a way of working out as they are meant to. Just over a decade ago Mary Manfredi was living in Italy, established in another career and no longer riding. Saer Coulter was a young girl living in northern California who loved horses.

“I was fortunate enough to catch ride some lovely horses growing up,” explained Mary about her junior years riding with Andre Dignelli and Judy Richter. “But I was burnt out after college. My sister was in Italy so I moved there.” Even though she was living abroad and not officially riding, Andre would still send her around Europe to try horses. That and seeing old riding friend Peter Lutz at a wedding lured Mary back. “We talked about having a barn together when we were kids. It was perfect timing and I couldn’t think of a better person to go into business with.” That was 2000.

Living in Woodside, Saer had neighbors across the street with horses and soon both she and her sister Audrey were taking lessons. For several years they rode at Millennium Farms. Serendipitously, the Coulter family contacted Mary Manfredi and Peter Lutz of Davenport Inc. in South Salem, NY on a recommendation from friends when traveling east for the summer. A turning point for all involved.

That summer of 2002 Mary and Peter found Saer her first children’s jumper and she was hooked. The Coulter family wanted to continue working with this dynamic duo, so Mary, who had always been an East Coast girl, moved to California. With over 25 horses in training, Peter remains on the East Coast and runs Davenport. The business partnership continues, as each one travels to the other coast to coach and train. This unique arrangement, along with the tremendous support of the Coulter family, has allowed Saer and Audrey to obtain their equestrian dreams.

“We are serious about achieving our goals,” Mary explains. “For example, we don’t have any furniture in the tack room because no one should be sitting down.” Both Saer and Mary laugh at this comment. But with more than 20 Coulter and Davenport horses at the California barn and most of them competing, there’s plenty to do. 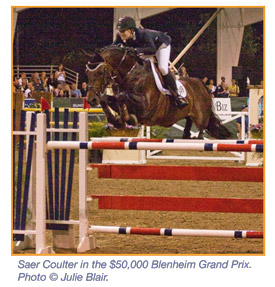 Saer is now in her final junior year – how time flies – and as most juniors do, she has set many goals. The hard work, focus and commitment have paid off, as those goals are one by one coming to fruition. When we spoke with Saer at Blenheim in June, she was fresh off winning in the Junior Hunters on the naturally talented Positano. Not to mention her fabulous third place finish in her fifth grand prix start at the 2009 Del Mar National followed by a seventh place finish at the Memorial Day Classic Grand Prix on Cats Are Grey. And based on her results at this June show she was hoping to attain her goal of qualifying for the NAYJRC, which she did. Before competing there at the end of July, she spent several weeks in the Netherlands, gaining invaluable European experience.

Soon after her return from Europe, alongside teammates Adrienne Dixon, Paris Sellon and Karl Cook, Saer contributed scores that earned the Zone 10 team a bronze medal over some very difficult and technical courses. She and Chalan also earned ninth place overall in the individual competition.

Even though her freshman fall semester at Stanford is just getting underway, Saer squeezed in some impressive finishes at last week’s Blenheim Fall Tournament, including an eighth on Chalan over a challenging indoor course in the $50,000 World Cup Qualifying Grand Prix on Friday night and a fourth in the ASPCA Maclay Regionals on Saturday night. The path will now lead to Syracuse for the Maclay Finals, another goal on Saer’s last junior year list.

Despite the two-hour trek from Stanford’s Palo Alto campus to her family’s barn in Petaluma, Saer plans on driving home for weekend lessons. “In terms of organization, fitting in riding gives me the incentive to get my homework done so I don’t have to do it on Sunday night,” she said. “School has always come first. I thought I would quit riding after my senior year, but now I’m at a place where I don’t want to.”

And why would she? Since Mary returned to the world of horses and crossed paths with the Coulters seven short years ago, another California-based young talent has a bright future. Although college is a priority, we may very well see Saer’s name again and again as she continues to pursue her equestrian goals and dreams.

Mary, as well, is living her dream. Choosing to work with Peter was the key. “He is my favorite rider. I’ve ridden many horses after other people have worked with them. But no horse feels as good to me as one that Peter has just ridden. He’s my idol.”

Thank you Mary and Saer!