The well-known event in Washington DC gained a huge audience online this year – over 130,000 people tuned into the new live webcast from the Verizon Center. The largest online and in-person crowd was for the $100,000 President’s Cup Grand Prix, a World Cup qualifier. Nick Skelton of Great Britain rode Beverley Widdowson’s Carlo 273 to victory.

Skelton and Carlo 273, a 10-year-old Holsteiner gelding by Contender, were the last to go clear in the opening round of 24 entries over a course designed by Michel Vaillancourt of Aiken, SC. Brianne Goutal and Nice de Prissey were second, while California phenom Lucy Davis rode Nemo 119 to third. Margie Engle and Indigo were fourth to round out the jump-off.

Sarah Tredennick of Denver, CO, rode Vigaro to the win in the $31,000 International Open Jumper Jump-off class. Stanford student Saer Coulter went as a character from the movieAvatar in the $20,000 International Open Jumper Gambler’s Choice Costume class. Although she looked blue, she earned second place behind top rider Todd Minikus dressed as Uncle Sam. Holding her own among the best, Saer earned several more respectable ribbons in the open jumper division.

The beautifully-decorated but technical track, designed by California’s Scott Starnes, had plenty of flowers and brush, as well as a hay bale bounce that caused elimination for some, a natural trot fence that lost its top rail a few times, and a hand gallop to the final obstacle. Taking top prize in the older Small handy was Wesley with Taylor Ann Adams in the irons for owner Ashley Pryde. The pair’s workmanlike ride earned scores of 84, 85 and 84 from the three judges – Sue Ashe, Leo Conroy and Mindy Darst.

When the group returned for the under saddle phase of the competition, it was Ashley Pryde’s other chestnut horse Pringle, this time with Amber Henter riding, who earned the blue ribbon.

As the first to show among the younger Small section, Cruise and Hasbrouck Donovan riding for Jessica Singer, laid down a handy trip that could not be topped. The duo earned first place and then third when Cruise pointed his toes under saddle. Also showing well in this group was the team of Illusion (Oscany Inc., owner) and Olivia Esse who earned second place ribbons in the handy and hack.

In the older Large section, the couple of Superman and Hannah Goodson-Cutt were super indeed, winning both the handy and under saddle phases. The well-matched pair were the only team to win both of their Tuesday classes and as a result carried over the highest first day total to Wednesday morning’s competition. In the younger age group of the Larges, Donovan rode her second mount, Laura Wasserman’s Overseas, to a blue ribbon in the handy and third in the under saddle. Ashlyn Matheus aboard her brilliant Einstein was second in the handy and fifth under saddle. 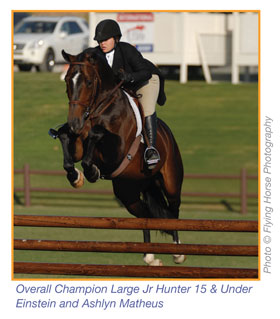 Bright and early Wednesday morning riders were invited back onto the grass to turn in their classic trip, which counted for 40% of their overall score and would determine the champions. The Large older section started the day. The twelfth to go in the order, Henter aboard Victory Road (Ashley Pryde, owner), won the class. Second place, as well as Reserve Champion in the division, was awarded to Stephanie Danhakl’s After Five with Cayla Richards in the irons. With a fifth place finish in the classic plus the two blue ribbons from Tuesday, the tri-color in the older Large section was awarded to a stellar Superman and Goodson-Cutt.

The younger group of the Larges rode next. Fabricio (Katie Kelso, owner) and Morgan Geller turned in a fabulous ride for the win. The team’s final total also proved good enough for Reserve Champion honors in the division. Matheus and Einstein placed second in the class and combined with Tuesday’s winnings earned them the section championship.

Topping the classic round for the older Small section was again Goodson-Cutt, this time on her other mount, Caretano. The duo effortlessly maneuvered the track to earn some of the highest scores of the day – 88, 90 and 88 – therefore clinching first prize as well as securing Reserve Champion in the section. Second to Caretano in the classic round, Wesley and Adams exited the ring with great scores in the mid-eighties; keeping the team’s overall adjusted total in contention for a grand prize. 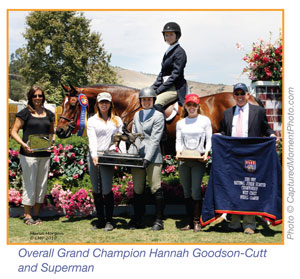 In the younger Small section it was the dappled grey Cruise and his partner Donovan, who coasted to the top prize as well as the division Championship. Just barely scoring below Cruise in both the classic round and division, Illusion and Esse left the grass with a second place ribbon and an overall total that proved high enough for the Reserve Championship.

Once the scores and percentages from the two days were calculated, the title of overall Grand Champion was awarded to Superman and his aviatrix, Goodson-Cutt with a total of 251. Outdone by only the narrowest of margins, Grand Reserve Champion honors went to Wesley and Adams whose two-day score totaled 250.8.

Congratulations to the best in the west, Superman and Hannah Goodson-Cutt, as well as to all riders, horses, trainers and parents for a successful 2010 season.