Heading north from Guadalajara, the 2011 Las Vegas National in early November was a hit with both exhibitors and spectators. Each year the excitement builds and the event gains momentum. Exciting evenings of competition mixed with the PCHA Adult Medal Finals and a successful NAL Sunday meant there was truly a highlight event for everyone. More on Vegas and all its trimmings below.

The Sacramento International was a sellout and as a result all involved saw some solid show jumping. Congratulations go out to all the winners, especially the little but mighty stallion, Flexible with Rich Fellers. They galloped on from that victory to the Los Angeles National Horse Show to clinch the win once again. Chalk that up to a double whammy for that indomitable duo.

To round out the west coast wrap up, the LA National also crowned some other top riders, including Sophie Simpson who took the win in the Onondarka Medal Finals and Demi Stiegler completing a solid end to her junior years with another medal win, this time the WCE Jr/Am Medal Finals.

What is NAL – The North American League?
Over fifteen years ago Lloyd Longenecker, President of Ryegate Show Services, Inc. took over the reins for an Adult Hunter Series. At that time he realized that exhibitors wanted more, so the program expanded to include numerous divisions and is now one of the most popular year-end championships on the east coast. With a finals at the Pennsylvania National in the fall it was a natural progression to add a west coast finals to the roster.

Why NAL?
The NAL West Coast Finals at the Las Vegas National gives top competitors in several divisions the opportunity to compete at a first-class venue for prize money and great awards. With up to $5,000 per division, trophies, championship coolers and more, why not NAL? Plus everyone who participates in the finals receives a special keepsake.

When NAL?
It is not too late! Most of the shows on the Blenheim schedule offer NAL qualifying classes. Including the Showpark Ranch & Coast Classic, there are approximately ten more Blenheim shows where you can earn qualifying points. Anyone can compete in these classes, but only NAL members will earn points. Qualifying period: September 1, 2010 – August 31, 2011

How NAL?
Membership is only $35 and you can join at the show or online through www.Ryegate.com. Horse and rider combinations are ranked, so a rider may earn points on multiple horses. An important detail to joining: With a 10-day grace period to join post the day of the class, you can join after you’ve competed in a qualifying class.

Where NAL?
Besides the chance to compete at the best horse shows in southern California to qualify, all those who are invited get the chance to show at the South Point Equestrian Center in Las Vegas.

See you in November!

Saturday, September 18, 2010: ASPCA Maclay West Coast Regional Finals
The ASPCA Maclay championship class was first held in 1933 at the National Horse Show and has since remained one of the most coveted events for junior riders (ages 17 & under) throughout the country. The goal of the prestigious competition is to inspire young equestrians to not only develop superior horsemanship skills, but also encourage respect and compassion towards their equine cohorts. In order to qualify for Saturday evening’s West Coast Regional Finals, junior riders must have earned 25 points as of August 31, 2010. Best of luck to all who earned a spot in the finals, held in November at the Syracuse Invitational Sporthorse Tournament. 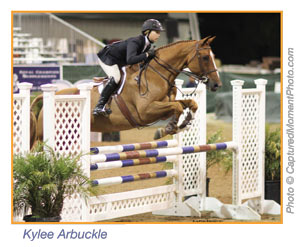 Thirty-nine leading West Coast junior equitation riders competed in Blenheim Farm’s covered arena on the evening of September 18th. With thirty returning for the flat phase and five for the work-off, it was 16-year-old Kylee Arbuckle aboard Kimberly Lynch’s D’Anconia Copper, who finished on top.

Scott Starnes’ course of fourteen obstacles asked the riders to commit to a flowing pace while riding the track. Eighth to compete in the over fences phase, Arbuckle (Karen Healey & Devon Gibson, trainers) showed mastery of the course and rode her mount with style and poise, earning her a spot in the top ten of the flat phase.

Following the jumping portion of the competition, the top thirty riders in the class were called back to work on the flat, divided into three groups of ten with the highest scoring riders flatting last.

Judges Kip Rosenthal and John Roper then chose their top five and asked them to return to the ring for a work-off. In reverse order, the juniors were asked to jump several jumps, including a trot jump and a rollback turn as well as to demonstrate two simple changes through the walk before returning to the line-up. Sitting second after the over fences and flat phases, Arbuckle had the advantage of watching three riders test before her, Audrey Coulter (Mary Manfredi, trainer), Clementine Yost (Benson Carroll, trainer) and Morgan Geller (Peter Lombardo, trainer). She clearly commanded the work-off requirements, having the most solid ride of the five. Sitting first after the first two rounds, Theodore Boris (Karen Healey, trainer) was the final junior to tackle the test. Unfortunately, he missed to the jump after the rollback turn, leaving the win open for Arbuckle. 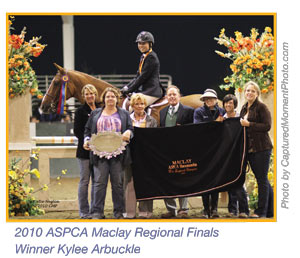 “[Kylee’s] work-off was great,” commented Arbuckle’s trainer of three years, Karen Healey. In addition to being happy with her student’s test, Healey was also glad to see that Arbuckle’s over fences trip was scored properly despite pulling a rail on course. “Her first round was scored just how it should have been – as if the rail didn’t come down – and then four points were taken off of her [final over fences] score.”

Although winning is glorious, earning a place in the top fifteen will hopefully earn a spot in the prestigious finals in Syracuse this November. Once the final regional competition of eight throughout the country is complete, the exact number of qualified riders per regional will be announced. 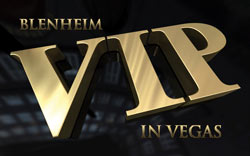 It’s time to gear up for a “suite” show in Sin City. All of the exciting event details are coming together for the Las Vegas National at the beginning of November and you don’t want to miss out. With a new VIP Lounge, fabulous Vegas parties with sweet deals for VIP and a show schedule spanning several divisions, there is no reason not to treat yourself (and why not bring your horse) to a place that offers a suite room right above your barn. Not to mention the nine restaurants, casino, theatres, shows, bowling alley and shopping just at South Point alone, with the Vegas Strip a free shuttle ride away.