A little over one year ago, amateur jumper riders Barbara Phillips and Simone Coxe were having coffee together and griping about entry forms. They had been doing their own entries for years, and were sick of all the repetition, endless handwriting and the holdup when mistakes were made. Then and there the two equestrians decided that instead of wishing there was an easier way to enter horse shows they would create an easier way to enter horse shows.

Equestrian Connect is Barbara and Simone’s answer to the tedious task of filling out show entries. The quickly growing company provides a way for exhibitors to create accurate paper entry forms for every “A” show on the Pacific Coast Horseman’s Association’s yearly show calendar.

Equestrian Connect is a lifesaver for riders with multiple horses, or trainers who fill out entries for their entire barn. Available primarily for west coast shows since December, the system supports 80 shows, including Blenheim EquiSports, Langer Equestrian Group, Spruce Meadows and HITS by providing show information and entry forms online. The company plans to launch on the east coast in July, and will initially support approximately 20 horse shows including HITS on the Hudson and the Washington International Horse Show. After registering with Equestrian Connect and initially entering horse, rider and membership numbers, all information is saved and automatically reproduced on a new entry form when the exhibitor selects the next show. Legible, accurate entries can then be printed out and mailed to the horse show office.

“We began using the system for our show entries this year,” says Toni McIntosh, of McIntosh Stables in Menlo Park. “We used to spend hours on our entries, making sure they were correct and fixing mistakes. Now that we’re on Equestrian Connect, everything is right there and it’s so much easier!”

Simone and Barbara have been thrilled with the response they’ve received from the horse community. They began in Northern California, where both women live and ride, and by word of mouth, Equestrian Connect caught on like wildfire all the way down to Southern California.

More than 1,000 riders are currently registered and as word continues to spread, the site gains about 200 new people monthly. “When I first heard about ‘the one minute entry service’, I had to try it!” says Jenni Martin McAllister, of Martin McAllister Training in Burbank. “I signed up and will never look back. I can’t believe how fast it is.” Equestrian Connect is free of charge for the 2010 horse show season. Barbara Phillips comments, “Our early customers are providing us vital feedback that helps ensure the performance, stability and usability of the service. The company is in the process of finalizing its pricing for 2011.”

Eventually, Simone and Barbara want to expand Equestrian Connect to list show results, track points and even put together show reports by rider and horse. They’ve also received interest from riders competing in other disciplines, but plan to stay focused on the hunter/jumper market for the foreseeable future.

Quite an enterprise that evolved from a conversation over coffee! Visit www.equestrianconnect.com to learn more and to take a guided tour of the system. 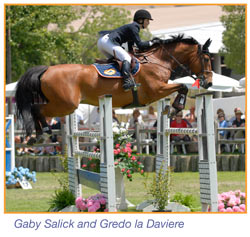 Exhibitors and spectators alike were treated to excellent competition and fabulous weather at the 2009 Memorial Day Classic.

Gaby Gallops to the Win!

In front of a sold out crowd at the Los Angeles Equestrian Center, veteran rider and new mom Gaby Salick rode Gredo la Daviere to the top spot in the $25,000 Memorial Day Classic Grand Prix. Out of the 30 horse field, twelve horses jumped the Scott Starnes course clean and returned to the grass. Despite having to go early in the jump off, Salick and her mount proved to be the best. The pair finished ahead of Ray Texel and Waldman Doo in second and Nicole Shahinian-Simpson who took home third place honors aboard Toyster Gold.

Also a crowd pleaser, the ASG Software Solutions USHJA Hunter Derby drew a competitive field of horses with almost forty starting the first round. Watching horses and riders exit the ring and jump back in during the course, an enthusiastic audience cheered the hunters on from both the grandstands and the VIP tables on the LAEC Terrace.  Amongst the VIP were ASG and Charles Owen representatives, who enjoyed top competition and a lovely catered dinner. 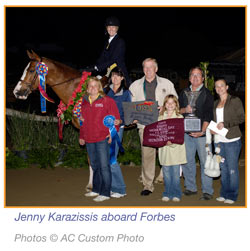 Jenny Karazissis was able to pilot Forbes (Tonia Cook Looker, owner) to a solid first round trip which left the pair sitting fifth going into the Handy Round.  The top 20 competitors moved into this round, where bonus points are awarded for handiness.  Jenny and Forbes earned the highest score of that round and took the lead.  Ali Leopold improved her standing one place by piloting Neverland (Gina Groth, owner) to a solid performance in the Handy round to take second overall.

“With Rumba in the class I was resigned to second,” said Karazissis, but then fortunes changed and Rumba was out of the running.  “The next thing I knew we were holding on to first and Tonia was beside herself.  She has wanted to win a Derby since they started.”  Earning two seconds at HITS Thermal Derbies (Rumba won both), with this win Forbes has easily qualified for the Derby Finals and will be heading back to Kentucky later in the summer.  The owner shows the gelding in the Amateur Owner Hunters, but sat out at Memorial Day Classic to let Karazissis focus on the Derby.  “Tonia is so supportive of having a horse do the open classes,” added an appreciative Karazissis. 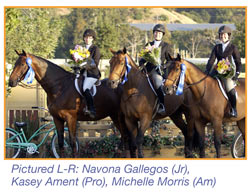 Another professional happy with her victory was Kasey Ament.  She is headed to Maui in December as the professional member of the winning team in the Memorial Day Equitation Challenge. Larry Langer, President and CEO of Langer Equestrian Group started the Trainer Incentive awards in order to recognize the backbone of this sport.  “Trainers are not recognized enough for their hard work.  I remember taking 30 plus horses on the road,” explained Langer. “They deserve a vacation in Hawaii and some cash awards. ”  The other team members, junior Navona Gallegos and amateur Michelle Morris won cool cruiser beach bikes.

Offering a full spectrum of classes for all levels of horses and riders, a number of riders excelled at the Memorial Day Classic.  In the equitation, Rachel Thurman (Jim Hagman, trainer) proved that hard work and consistent riding yield excellent results.  Aboard her seven year old gelding Vermeer, Thurman won a very large Maclay class, the WCE, and earned third place finishes in both the USEF and CPHA Foundation classes.

Over in the jumper ring, Chelsea Curtis proved unbeatable.  She was show champion in both the Adult Amateur Jumpers and the Modified Jr/Am Jumpers with her Tadine (Nancy Prosser, trainer) and then continued her winning streak by winning the $1,000 Children’s/ Adult Amateur Jumper Classic.  “It was awesome and felt, really, really good,” said an exuberant Curtis.  “Our first two years together were difficult, and then we clicked.  I’ve been riding with Nancy since I was eleven and I trust her completely.  We just had to get Tadine to think that things we wanted were her own idea.”  When not in the saddle, Curtis is pursing acting at a local college.

Strike! Every year George Chatigny, CEO of Los Angeles Equestrian Center, organizes the CPHA Foundation Bowling Benefit during the Memorial Day Classic.  “The Benefit has turned into a fun night for everyone at the bowling alley with beer, pizzas, and snacks.  It is also a great fundraiser and in a couple of hours we raise some much appreciated funds for the CPHA Foundation,” explained Chatigny.  Chris Norden of Norden Equine (affiliated with Markel Insurance) fielded a team for the first time and they had a ball (pun intended).  “I last bowled when I was ten,” laughed Norden “but this was fun.  What a great idea and we will definitely be back next year.”

However, it was the Marlay Farms team that took top honors this year, upsetting previous years’ champions the Bowled Tendons and the LEG Up Bowlers, who finished second and third respectively. The funds raised help support the CPHA Foundation’s worthy programs of aiding professionals in times of need and providing higher education opportunities through scholarships and grants.

Northern California riders are enjoying the seven shows at the Horse Park at Woodside. The facility continues to improve and the property with miles of trails and a cross-country course is breathtakingly beautiful.

The Hansen Dam Equestrian Center is under new ownership and management, and LEG is pleased to present the Verdugo Hills Series, five USEF ‘B’ and ‘C’ rated shows. Although held over one weekend, they actually count as two one-day shows, allowing riders and trainers to economize at a quality location. The USEF ‘A’ rated Hansen Dam Fall will be our feature show of the year. Don’t overlook this great local competition option. Verdugo Hills 4 is coming up quick, May 30-31. Stalls are available for both overnight and day use.

The Beauty of Colorado is calling
Looking for a vacation spot to horse show? Can’t beat the beauty of Colorado. With four weeks of horse shows you can compete, beat the heat and bring the family.  The Colorado Summer Circuit kicks off with the Colorado Circuit Preview (June 25-28) and many special classes and events are featured throughout the four week circuit.

This year LEG expanded its successful Colorado spring shows from two weeks to three weeks, and the response from competitors was resoundingly positive. LEG manages a total of nine weeks of shows at the Colorado Horse Park in Parker, Colorado.