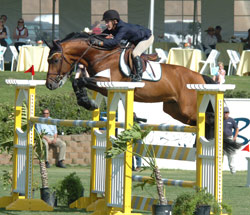 For the Red, White & Blue Grand Prix, Michel Vaillancourt designed a course that suited the field well – inviting with technical challenges resulting in four clean rounds. Susie and Cantano led the way, followed by Keri Potter riding her horse Rockford I, Kristin Russell aboard Ashtin’s Obsession and then Keri again on the Dotson’s Caretano B. Just off the mark with a single time fault was Young Rider Paige Dotson on her own Friponnier II. Riding the course with flair, Paige is definitely ready for the NAJYRC later this month where she will represent Zone X on the ‘A’ Team (see the interview with Paige in our June 13th issue online).

Susie set the pace with a clean ride in 40.37. Kristin made a gallant effort, having the last fence down in a respectable 42.43. Keri chose to come back on only one of her two, Caretano B, almost catching Susie in a time of 40.52.

Twenty-one horses entered the $25,000 July Theme Grand Prix. With a mix of youngsters and veterans, the questions asked by the Michael Roy Curtis designed course gave the horses and riders enough tests that only three of 21 went clean. Veronica Tracy on her Muscadet de la Saveniere was first clean and with a fast time but four faults in the jump off, she left it open for the next two. The second in, Eva Gonda, rode El Campeon’s Conteros with precision but also had an unfortunate rail. This left Susie Hutch and Cantano a chance to be clean for the win.

Once again the dynamic duo of Susie and her handsome mount took the spotlight. “It’s nice to have Cantano back in the winner’s circle. He is a fast and clever horse. This win is a team effort and I again celebrate this victory with the Iversons and Sandy.” Congratulations! 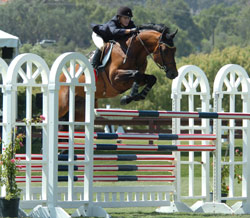 On a beautiful July day in Del Mar, Guillermo Diaz set a straight-forward course and added to the time allowed after the third horse in the ring, resulting in ten clean rounds. So it was a race to the finish with yet again Susie Hutch and Cantano taking top honors.

She explained her strategy: “I only watched Erin Duffy before I went. She added where I had planned to leave out strides and went clean. So I took the gamble leaving the strides out and it paid off.”

Michael Endicott on the young Santiago went clean and fast enough for the 3rd spot and Erin’s conservative clean ride placed her in 4th on Lionell. Ali Nilfourshan tried to catch the leading time riding Kilgrew’s Attraction, but had trouble at the last fence and ended up 5th. Leslie Steele on AW Butterfly Hula put the heat on and ended up a very close second, just 2/10 of a second behind Susie.