The final show season of 2009 is here and if you plan to compete in California this fall, below are some details you might find enticing. With a new state-of-the-art roof on the arena, the Del Mar International is back in full swing offering two weeks of ‘A’-rated options. Its sister show up north in Sacramento added a Welcome Week ahead of the well-received World Cup Week. The four show combo offers two World Cup Qualifiers – the Del Mar International $50,000 World Cup Grand Prix, presented by Antares, and the $75,000 Grand Prix of Sacramento – as well as two big money Junior/Amateur Grand Prix events ($20,000 and $25,000 respectively), two $25,000 1.45m Grand Prix classes, two Ride & Drive Challenges and Young Jumper Championship classes. Read on for more details.

And that’s just some of the fun in store for the showjumpers. For the hunters, both weeks of the Del Mar International offer ‘A’-rated divisions, with a special opportunity during week two, the chance to compete in the USHJA Zone 10 Hunter Championships. Each round in each rated division will be judged and scored by two judges (with the exception of ponies, they competed for this title earlier this summer). One score of the competitor’s choice will be dropped from the total score and the highest total points will receive the honor. There is no extra entry fee for participating in these special Zone 10 Championships. During the new Sacramento International Welcome Week there’s a $3,000 Pre-Green Hunter Championship plus a 3’ Hunter Chase for children/adults and a $10,000 Hunter Derby scheduled for Friday night.

Speaking of night classes, back down in Del Mar, in the early evening before Saturday night’s World Cup excitement is a book signing by the Pulitzer prize winning author Jane Smiley, who just released her latest horse novel “The Georges and the Jewels” and the fast and furious dog agility competition, which is always fun to watch. The $5,000 J2 Rolling Meadows Ride & Drive starts the evening events at 7 p.m.

Pony Clubbers won’t want to miss this – the show is hosting a Pony Club Workshop on Saturday afternoon where Olympic Gold Medalist Will Simpson will talk about his fabulous experience in Beijing and answer questions from the audience. All workshop attendees are invited to stay and attend the book signing, watch the dog agility competition, the Ride & Drive and the Grand Prix.

“We like to offer not only a quality horse show but a variety of special classes that are fun for both horses and riders, and dogs, as well as spectators,” commented Show Manager Dale Harvey. “It’s always great to watch a World Cup Qualifier but seeing these top riders compete in a Slalom, Five Bar, Gamblers Choice or Ride & Drive is also exciting.”

So for the thrill seekers both on and off the horse, there are some unique classes offered at both shows – a $5,000 Double Slalom where two horse and rider combinations compete at the same time over identical courses side by side. The fastest from each round advances to the next round until the winner is announced in the final round. A $5,000 Five Bar class where a series of jumps are set in a row, and each time the entries jump clean the final five bar jumped is raised higher and higher until only one horse can clear the obstacle. A $2,500 Speed Gambler’s Choice where each jump is worth a certain number of points based on difficulty and riders choose their own course. The fastest round with the most points wins. And the $5,000 Ride & Drive is always fun – riders jump a course as fast as they can, literally jump off their horse, with someone nearby ready to catch it, and immediately jump into a car racing it through a cone obstacle course. The rider that is clean and fastest through both courses takes the prize.

Exclusive to the second week of Sacramento are several multi-discipline clinics. From November 6-8 participants will have a special opportunity to ride with one of the following well-known names – Showjumpers: Will Simpson, Dressage: Christine Traurig, Eventing: Gina Miles, Western Horsemanship: Julie Goodnight. See the web site for more information and applications.

Summer is sizzling!
From Calgary to Germany, San Juan Capistrano to Lake Placid, West coast riders are competing and winning all over the world! We welcome Paulo and Jennifer Santana of Santana Stables to California and we’re looking forward to working on a new campaign for Cam and Becky Smith’s Freelance Showjumping. Very soon we will be launching the long awaited Pegasus Show Stable web site, where we’re adding multiple wins to the results page each horse show.

Congratulations to all of the graduates – we wish everyone a fun and successful season. Next newsletter series will be at Showpark in July. Contact Tammy Chipko for GREAT deals! 818.472.5930 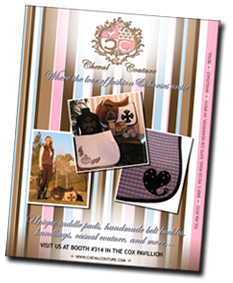 Are you ready to develop a fabulous ad or build a web site? Has your web site not been updated or redesigned in months or even years? We aim to help clients attain their marketing goals. Contact us!

Chronicle of the Horse – published weekly
• Deadline: 2 weeks prior to the pub. date

WEST COAST ACTIVE RIDERS
The New Year is starting with a BIG BANG! We have over 125 members to date, a new Chairman of the Board, fabulous applicants for the Meritorious Riders Grant, Spruce applications coming soon AND the not-to-miss annual WCAR Casino Night.

Buy World Cup Tickets & Support West Coast Show Jumping!
Buy your World Cup 2007 tickets through WCAR and 10% of the ticket price will be donated back to the organization. Email us at [email protected] and we’ll purchase tickets for you on behalf of the organization. Viva Las Vegas and WCAR!

Union Jack Stable & Garden is the exclusive North American distributor of quality products from the British company Harold Moore, Ltd. Weighing in at less than three pounds, the one-of-a-kind Unifork is in a class by itself with rounded ends that scoop under the material you want to pick up without digging into the surface below. The tines are uniquely tapered allowing the Unifork to easily glide through the muck into the raised back of the fork.  Another distinctive quality, the raised back stows larger loads than the average fork. Choose from one of four fun colors for your new Unifork: fiery red, country green, baby blue, or hot pink.  www.unionjackstable.com