Eight weeks of horse showing ended with a bang, but not the one West Coast equestrians expected. After an almost flawless two months of weather, Mother Nature kicked up her heels and blew, blew, blew almost everything down on Sunday, March 22, the final day of the 2009 HITS Desert Circuit.

The much anticipated $150,000 HITS Grand Prix of the Desert, along with the remainder of the show schedule was cancelled. The show management decided to split the grand prix prize money amongst the 38 entrants, so they all walked away winners. The day was disappointing from a competitive aspect, but certainly a kind gesture from HITS and the safest decision for all involved.

WILL SIMPSON & THE COMPTON JUNIOR POSSE

Six riders from the Compton Junior Posse battled the gusty winds at the showgrounds on Sunday for a chance to ride with Olympic Gold Medalist Will Simpson. Through the power of horses, this special California-based organization keeps inner-city kids “on horses and off the streets” by teaching responsibility, discipline and increasing self-esteem. With a mission to establish the first inner-city high school equestrian team and charter school, which in turn will allow students to become eligible for equestrian scholarships, the Junior Posse is hosting a fundraiser on May 30th at LAEC honoring Will Simpson.

Awarded to the overall leading female Grand Prix rider based on points accumulated during the HITS Circuit. 2009 is the first year for this award.

Awarded to the Grand Prix rider with the most money won in the four World Cup Qualifying Classes at the HITS Desert Circuit. 2009 is the first year for this award.

As a Junior rider, Richard demonstrated consistently good sportsmanship, ethical and respectful behavior both in and out of the show ring.

Sponsored by Karen Healey Stables, this award goes to the Grand Prix rider who best exemplifies the style of equitation as modeled by Jimmy Kohn.

The Junior Jumper rider who not only exhibits the best American style of equitation as modeled by Olympic Medalists Joe Fargis, Conrad Homfeld and George Morris but is also respectful, dignified, courteous and workmanlike in the manner of a true sportsman.

Sponsored by Cathy Hayes, this trophy is awarded to the Circuit Grand Champion Amateur-Owner Hunter.

Always popular with competitors and spectators, the $10,000 ASG Software Solutions/USHJA International Hunter Derby returned for Week VIII. Mountain Home Stable’s Rumba with John French aboard did not disappoint, repeating their winning streak by capturing the win in both the classic and handy rounds. Simply striking to watch, Rumba exemplifies the High Performance Hunter. 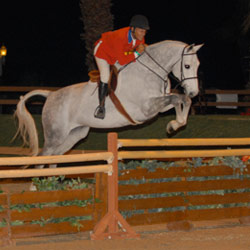 Junior rider Caroline Ingalls won the coveted Ronnie Mutch Equitation Championship on Friday night. In a unique format that illustrates a true horseman, competitors must walk, prepare and ride the courses without any outside training assistance. The first course includes gymnastics, trot jumps and other technical questions. Then riders are called back in reverse order to ride a second round. Competitors are judged by two sets of judges – one for their performance in the arena and the other for their preparation in the schooling area. Challenging for the exhibitors as well as giving the trainers a much-needed break, it is interesting for trainer and spectator alike to watch how these junior riders perform under this type of pressure. Offered for the second year, this class is held in honor of R.W. Mutch, who back in the 1950’s won medal finals at the age of 15 and rode for the USET at age 18.

Congratulations go to the superstar team of Rich Fellers and Flexible, owned by Harry Chapman, who topped a field of 51 riders to win the $25,000 HITS Grand Prix. With 15 clean over the Olaf Petersen (Germany) course, the race was on for the win. Six of those 15 went double clean, with Fellers and Flexible stopping the clock at a smokin’ 38.276, next fastest was Mandy Porter aboard San Diego, with a time of 39.326. Both of these teams are in the running for the World Cup, with one qualifier left to go, Mandy is currently ranked third in points with Will Simpson and Rich a close fourth and fifth. Third in this $25,000 class was hot shot Ashlee Bond, riding her fantastic Cadett 7. Catapulting to the top of the World Cup point list, Bond had an unbelievable circuit winning two of the four World Cup Qualifiers.

HITS DC VII was a hit for Grand Prix riders Jill Henselwood and Richard Spooner. Canadian Henselwood was hot on Friday, March 13th when she earned both first and second in the $25,000 HITS Grand Prix on Juniper Farm’s Special Ed and Black Ice respectively. With 56 horse and rider combinations vying for prizes, Henselwood took home just over half of the $25,000 purse.

Spooner topped that one-two win with a one-two-three victory in the $50,000 HITS Grand Prix on Sunday, March 15th. Having three of the four clean rides over the Marina Azevedo (Brazil) course, Spooner had the advantage in the jump-off. He set the time to beat at 43.68 with his first ride on S&B LLC’s Ace. His second jump-off ride aboard Pako was also clean, but not fast enough to take over the top spot. Spooner did manage to beat his own fastest time when piloting Peter Farlinger’s Cordoba around the shortened course in 41.52. That left Guy Thomas and Peterbilt, who had an unfortunate ride to the second jump. Knowing he wouldn’t catch Spooner, Thomas voluntarily withdrew from the jump-off and finished fourth. As the HITS Desert Circuit all-time leading money winner, Spooner protected that top spot by winning $32,500 of the $50,000 purse.

Here are additional links for the 2009 HITS Desert Circuit:

Here are links to some notable charitable efforts going on in our sport. The latest news from Jessica Newman’s Just World International means that now anyone can become a member and technical officials are now jumping on as ambassadors. Click here for the details and here for the JWI web site.

The Equestrian Aids Foundation hosted a carnival recently where Grand Prix greats got dunked for charity. See the press release and photos by clicking here.