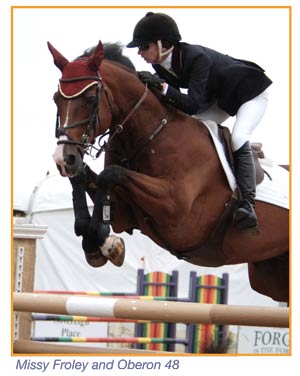 Located in pastoral Portola Valley, Fremont Hills is an equestrian haven with a grounded nature. Each of the core team – Wendy Carter, Debbi Sereni and Missy Froley – has a distinctive background in equitation, hunters, and jumpers, so they can draw from their varied experiences for teaching all levels. “When we arrive in the morning, our goal each day is to make this day better than the last. We don’t say we specialize in one discipline, better said that every one of us contributes in many ways,” Wendy explains. So students at Fremont Hills benefit from not only a fabulous facility but also get to ride with three trainers at the same location—a prime opportunity for a diverse riding education, offering riders a library of experience to attain their equestrian goals.

Nestled between San Francisco and San Jose, Fremont Hills borders Woodside and Palo Alto and is easily accessible from Santa Cruz and Monterey. The group has 25 horses in training at the Portola Valley Training Center and eight others at nearby Bay Rose, where Wendy and Missy also train. They compete at prominent west coast ‘AA’ shows, including HITS, Blenheim, LAEC and Del Mar down south, as well as closer to home Menlo, Pebble Beach, Golden State, Brookside and Woodside. The team at Fremont Hills sees that each rider gets personal attention, providing a diverse program where each client progresses at his or her own pace. Missy commented, “We have ponies, 3’ hunters, 3’6” hunters, open horses and Grand Prix jumpers. Each of us have pieces that we’re good at, so we make a solid team.”

The three collectively agree that as the business manager, the communication hub between trainers and management, and the one who manages the pre-show details from schedule to entries, Debbi is the glue that holds it all together. More active in horse shows in previous years, (her son Matt Sereni won the 2003 ASPCA Medal Maclay Finals), Debbi knew she wanted to be able to spend more time with family when she adopted daughter Mia, now four years old. She contacted Wendy, who was working privately at Bay Rose, and convinced Wendy and Missy to take on a big piece of the training and traveling so Debbi could stay closer to home. 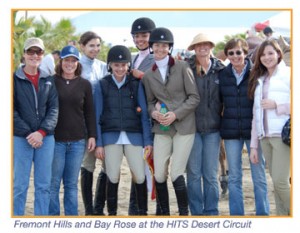 By then, Missy and Wendy had been working together for several years, moving north from Coto de Caza in 2004, and already had a successful team dynamic—they have, in fact, spent the last seven years in working partnership. Missy started riding at the age of 6 with Jerry Daniels, then rode for a while with Michael Croopnick before she found her way to Caroline Bonham. She spent her junior career with Caroline where she excelled in equitation. Graduating from the junior ranks, Missy worked for Caroline until she met Wendy at Coto De Caza Training Center. Now, “We come as a unit,” Missy jokes, referring to her professional relationship with Wendy.

Wendy Carter grew up in Beverly Hills and also began riding at age 6, where she went on pony rides every weekend. That progressed into lessons at Foxfield Riding Academy where she credits Nancy Turrill and Joanne Postel for teaching her about the love of horses and the passion of riding, not just about winning ribbons. Wendy was lucky enough to ride with a variety of trainers through out her Junior and Amateur career, including Mike and Lolly Edrick, Bennett Kurtze, Jimmy Williams, Susie Hutchinson and Lucy Stewart, who collectively brought her success in the show ring as well as taught her how to be successful as a professional. She feels most indebted to three well-established professionals: Leslie Steele, Carleton Brooks and Scott Wilson. 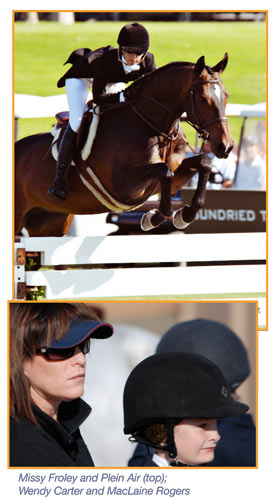 At home in Portola, work starts at a reasonable 8:00 a.m. every day with lessons from morning until late afternoon. Everyone works together sharing in the duty of daily Starbucks runs. With such a busy competition schedule, an important part of the agenda is reaching goals and making time for fun. “At horse shows clients take what they’ve learned at home to the show ring. When they come out of the ring it’s about accomplishing their goals not necessarily the ribbon.” says Missy. “Having fun is also part of it. We try to do at least one night out with everyone since there are usually around 10-15 riders with us from Fremont Hills.”

Last year, the Fremont Hills team completed 145 days on the road, traveling to sixteen away shows, spanning northern and southern California. While they will stay closer to home in 2009, they always spend at least two weeks every year at Pebble Beach and Menlo. Past accolades include medal final champions, trips to indoors and grand prix placings, with several riders enjoying success in the show ring already this year. Missy Froley and Plein Air © Deb Dawson, other photos courtesy of Gail Morey. 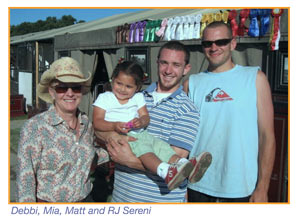