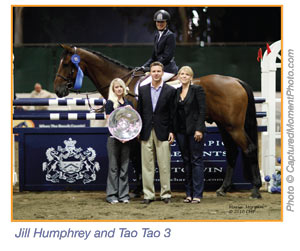 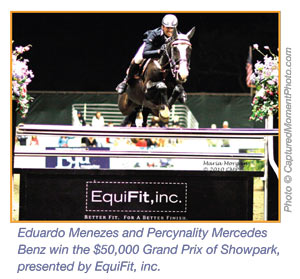 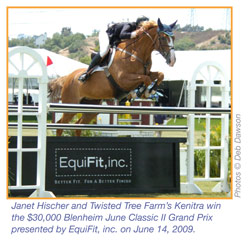 With long galloping distances, no water jump and the last line set towards home, Jack Robson designed what appeared to be a very inviting course for the $30,000 June Classic Grand Prix, presented by EquiFit, inc.  However, after seventeen horses entered the ring, only two went clean, three had just one time fault, four had just one rail and many others had time faults along with rails.

Jill Humphrey, who was first on course with Kaskaya (Leone Equestrians Inc., owner) rode beautifully but accrued a single time fault, exceeding the allotted time of 90 seconds by .46. Second to attempt the course and first pair to go clean were Janet Hischer and Kenitra (Twisted Tree Farm Inc., owners). Eighth to go was Humprhey aboard Corralino (Katie Harris, owner) whom, having learned her lesson from the first ride, jumped the course fault free.

Clearly not as inviting of a course as it appeared, those nasty time faults proved to be a problem for half of the class.  Refusals and rails occurred at fence one, two and at each of the three elements of the triple combination.

Hischer and Kenitra were first pair to gallop around the shortened course for the jump-off where they laid down their second clean round of the day in a time of 42.12.  Humphrey attempted a tricky approach to fence three, resulting in a rail.  She then retired, handing the win to Hischer.

The three horse and rider combinaitons that ran into trouble with the clock, leaving them fractions away from the jump-off, were awarded third through fifth.  Alicia Jonsson Foster and her mount Don Francisco were just over the time allowed with 90.23, Humphrey finished fourth with Kaskaya, and Missy Froley aboard Bay Rose’s Oberon 48 took home fifth as the last of the one-faulters with a time of 90.78.  Joie Gatlin and her young mount Twindoline took down a rail at fence seven but proved to be the best of the four fault rides finishing sixth, Harley Brown and Cassiatio (Oak Park Group LLC, owners) clipped the fourth jump on course for seventh, taking home another portion of the prize money was Gatlin aboard her dependable SunCal’s King for eighth, and Erin Duffy rode Kir Royal to a ninth place finish, rounding out the four-fault trips.

Weather was perfect on this glorious SoCal Sunday.  After dining on delicious Argentinean fare atop the hill, many of the VIP guests stayed long after the event.  From pony rides to bounce houses, Kids’ Day was also a popular place for the younger crowd (and their parents).

Stay tuned for upcoming newsletters – from the Zone 10 Pony Finals to Spruce, Young Rider and Euro reports, Grand Prix action and more. The next newsletter will be in your inbox in less than two weeks and a special online edition coming in July.

The course for the $30,000 Blenheim Classic Grand Prix, designed by Linda Allen, was clearly a challenging 16- obstacle track. Out of the 23 horses that galloped onto the grass field, only three left all the rails up. Fourth in, Guy Thomas and Peterbilt (Peterbilt, LLC owners) were the first pair to go clean followed by Susan Hutchison and Muscadet de la Saveniere (Veronica Tracy, owner) riding eighth. Not until the seventeenth in the order did we see another fault free ride, New Zealander Anna Trent aboard Muskateer NZPH (Warwick Hansen, owner).

Trouble spots were seen throughout the course, including the second fence, an oxer on a bend, which lost its top rail a number of times, as did the next fence, a skinny vertical. The second element of the triple, 10B, also caught a few toes for four faults. Another course culprit was the water jump, set as a vertical, which proved spooky and resulted in a few run outs. 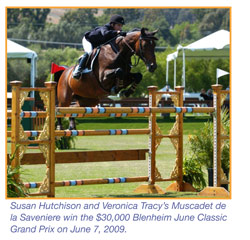 Thomas was the first to take a shot at the jump-off course finishing with a rail at 5B and a time of 38.97. Hutchison and Muscadet de la Saveniere were up next. They laid down their second clean, smooth trip with a hard to beat time of 38.33. Last to go, Trent tried to answer Hutchison’s call. Over the first three obstacles with ease, she then dropped two rails – one at fence four as well as one jumping out of the combination – solidifying the win for Hutchison.

Six horses were one rail away from a clean round, including Thomas on his second mount, Carino, fastest of the four-faulters for a fourth place finish, Gaby Salick and her young, talented mount Centuria Z had only 10B down for fifth, Joie Gatlin aboard the consistent SunCal’s King barely clipped the skinny to take home sixth, Lane Clarke and the crafty Kiss the Sky finished seventh, Hutchison on her second mount, Cantano had a heartbreak rail at the second to last jump, and Harley Brown on Cassiato rounded out the four-fault rides for ninth.

Sunday was also selection day, as the Young Riders from Zone 10 competed in a challenging final two-round trial. After their multi-medal success at NAJYRC in 2007 and 2008, Zone 10 is certainly the team to beat in Kentucky July 22-26. Read more about it in this week’s Conversations with Young Riders below.

The Young Rider ‘A’ and ‘B’ Teams and the WCAR Spruce Teams, who will be competing at the Skyliner Tournament June 16-21, gathered in the hilltop VIP Tent for a well-deserved celebration during the Grand Prix.

Congratulations and good luck to all!

SHOW MOM is pleased to announce a new feature article, “Being a Horse Show Mom.” Plus, don’t miss the blog – read & participate – the hot topic this month is Indoors. If you are there, jump online and share stories! See more at www.showmom.com.

IPPOS International is jumping into the spotlight. After sponsoring the WCAR Spruce Teams and making the trip to the Pan Am Games with Jill Humphrey, the show duffle bag will also be seen at Indoors this fall. More on the fabulous On The Circuit Collection at www.ippos.com.