Forty-five years ago an 18-year-old sophomore at Fairleigh Dickerson University, named Bob Cacchione, began IHSA with the help of his professor, Jack Fritz. Since its inception, the Intercollegiate Horse Show Association (IHSA) has expanded from only two competing colleges to now over 375 colleges. Today, IHSA contains 36 regions in eight zones and there are more than 6,000 students that compete in Hunter Seat Equitation. 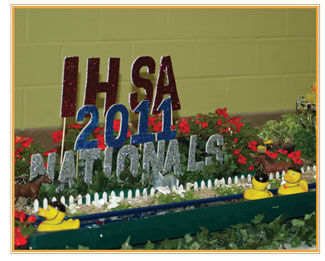 regardless of their financial position, IHSA essentially cuts out almost all the expense yet still makes competition possible. Regardless of past riding experience, IHSA participants can learn as well as compete in hunt-seat, with classes ranging from walk/trot and Open Equitation divisions to the prestigious Cacchione Cup.

The ultimate goal for the individual as well as a team is to make it to the coveted IHSA Nationals. There is a multi-layered process to achieving that goal. Within each region, schools compete against each other for the high point team position. Also students can compete as individuals for the high point individual position. During the region shows, student and teams accumulate points to compete in the Region Finals. The top three riders at the Region Finals then continue on to the Zone Finals. Then the top two riders at the Zone Finals advance on to IHSA Nationals. The Cacchione Cup is awarded each year to an individual at the IHSA Nationals. Judged as a two-phase class (over fences and flat), the top riders compete in a work-off determined by the judges.

Laura Thompson: A Brief Intro
A recent graduate of Averett University, I am lucky enough to have my own horses yet I also participated in the IDA program at school. IDA is similar to IHSA for the discipline of dressage. I was on the team for three years.

Just like IHSA, the purpose of competing on the IDA team is to make it to the Nationals each year. One of my most memorable college experiences was climbing the IDA ladder and making it to the top. After a successful show season my freshman year, I ended up Region Reserve Champion and made it to the IDA Nationals in Findlay, Ohio. It was both exciting and intense to attend Nationals my first year. All the planets aligned on that Sunday of the Individual Competition and I won!

During my second year at Averett University I became a captain for the IDA team and competed at Upper Training level. Once again, after numerous successful shows, I ended the regular show season as Regional Reserve Champion. Again I was on my way to the 2010 IDA Nationals, this time held in Laurinburg, NC. Competing against the top twelve riders in the nation, I was lucky enough to draw a horse that I was familiar with. Although I ended up third, the experience was just as fantastic as when I won.

Competing at Nationals is an earned honor. As with any rider, I had my ups and downs at some shows, but was able to pull through two years in a row and will always treasure my Intercollegiate National show memories. 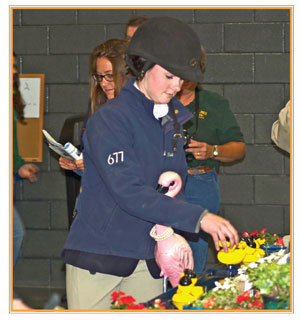 IHSA Nationals: Ducks and Don’ts
One of the unique things about the intercollegiate team experience is the horse draw process. Riders do not bring their own horses to compete; rather they draw from a pool of rubber ducks and the horse with the corresponding number on the bottom of the duck is the one they will ride. This is a defining moment for some riders and a big question for others.

Unlike the Intercollegiate Dressage Association which allows their riders a ten minute warm up before entering the show ring, IHSA riders mount their horses and enter the show ring without any warm up. Pre-duck drawing, riders can prepare by watching the horses warm up in the show arena before the show begins for the day. A competing horse list is available with horse’s name, school, height, color, gender, whether spurs are needed and brief notes. No competing student is allowed to ride a horse in the group warm up to ensure that they do not get an advantage of riding their possible mount before their class.

Cacchione Cup 2011: Cohen, Wakeman and Jacobs
With 36 entries, the 2011 Cacchione Cup was the largest in the forty plus year history of the class. The horse draw was a bit crowded; the usual number gathered to duck delegation is nine to sixteen so the Cacchione contenders more than doubled the norm. 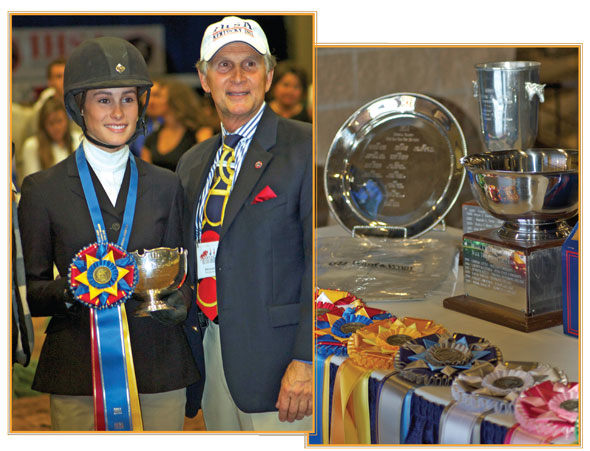 Former California equestrian star Shelby Wakeman, one of the numerous successful Karen Healey students, was among this select group. Now a senior at NYU, Wakeman went late in the jumping phase and earned an 86, the top score of the class. After the flat phase, only 0.75 separated the top three riders: Marissa Cohen, a senior from Centenary College, Shelby Wakeman and Rob Jacobs, a senior from St. Andrews. The next morning the three worked-off and Wakeman finished second to Cohen and Jacobs finished third. Wakeman was the most experienced of the three, Cohen had moved up from the Intermediate Level over her college years and Jacobs credits the staff from St. Andrews as his only real trainers, as he did not ride much before attending college. Although each rider illustrated skill, poise and catch-riding capability, Jacobs epitomizes the IHSA way: Learning to ride and achieving the values and rewards of high competitive goals without owning a horse.

The Reserve Champion ribbon Wakeman earned marked the first time a rider from New York University had ever placed as high as second at IHSA Nationals.