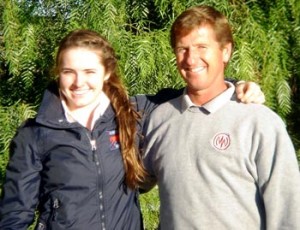 After watching her fellow Californian Aurora Griffin move to 1.50m and win Individual Bronze at Young Riders, Team Gold, Double Gold at Harrisburg, in addition to the William Steinkraus Style of Riding Award, Zazou decided it was an opportune time to ask Aurora and her trainer a few questions.

ZH: You made an exceptional debut at the North American Young Rider’s Competition last summer, earning the Individual Bronze medal. What went through your mind during the competition?
AG: Of course I put a lot of pressure on myself during Young Riders. I had prepared for months, and it all came down to those four days in Virginia. When I was leading after the first day, I just kept telling myself “It isn’t over yet” because there were so many rounds yet to do. I was a little nervous, but I knew I had a great horse in Tucker, and he was competing at the top of his game.

ZH: You’ve always been an inspiration to me since we did the FEI Children’s International Jumper Final at Hummingbird Nest Ranch. You have zoomed up the levels in record time,jumping higher and faster. What makes you so brave? Do your parents ever get nervous for you?
AG: I have always enjoyed doing things “high and fast.” I trust my horse and my trainer, and I know that both of them will keep me safe, and this allows me to take risks confidently. As for my parents getting nervous, Mark says my mom lifts up one of her legs over every fence when I show. She has been very supportive of my riding. In fact, the day I got my Bronze at Young Riders was her birthday. What a great day!

ZH: Mark you have not put Aurora in the hunters and the equitation. Is this the same approach you take with all of your students?
MW: Aurora has an equitation horse that we didn’t get to use much. His name is Milo, a few years back he came up with a mysterious lameness. He is fine now, but we never went back into the equitation ring. I think the equitation is super important in that it makes riders smooth and correct. It also teaches riders to make adjustments early.

ZH: You have first hand experience in the saddle at the Grand Prix level. Can you share a few thoughts about getting to that level?
MW: I have not had the luxury of multiple horses at the higher level. It is such an advantage to have a string of top horses. I have had great success with one, and that should inspire others that they, too, can achieve their goals with one great horse. This year I will start Thermal with three Grand Prix horses. Luckily, Aurora also has back-up mounts, so she doesn’t end up on the sidelines.

ZH: If you could each do it over, in terms of your own career, would you do anything differently?
MW: You can only learn from the path you have chosen, you rarely get another chance or do-over. So I always say: “Don’t circle.”

ZH: It looks like the Grand Prix competition might be on the horizon for you, Aurora. When do you think you will give it a try and where?
AG: I have a few horses that are capable of jumping Grand Prix height at this point, and I am planning to begin my Grand Prix career this year. I know it’s a tough game, but I have been working hard this winter, and I look forward to my debut at Thermal.

ZH: The Americans didn’t have a spectacular World Cup. Mark, you buy a lot of horses in Europe and have had a chance to study the training methods there. What, if anything, are we doing wrong in the United States?
MW: We aren’t doing anything wrong. We just hate to be cold. The Europeans spend 7 months out of every year stuck in small indoor rings and have learned to master that small space. On the other hand, after the first frost we Americans go to Florida or to the desert – we are fair-weather folk.

ZH: Thank you so much for taking the time to answer these questions. Best of luck at Thermal!

Aurora’s comments on the George Morris Horsemastership Sessions
in January, 2008:

I experienced more growth in my riding that week spent training with George Morris than any other week of my career. With regards to horsemanship, I learned more than I had ever since the time I started riding.

The program was phenomenal, and although it was a lot of work, I came to realize that the best way to learn horsemastership is hands-on grooming, feeding, mucking, and cleaning.

Among the most profound things I heard that really summed up the lesson of the week was by Melanie Smith Taylor, “You, as a rider, have to know what you are sitting on when you enter the ring.” Melanie is a true horsewoman; she went on to say that you have to know every detail about your horse from his physical condition, to stall condition, to tack condition, to conformation, to shoeing, to diet.

When I spent the day with Beezie Madden, I found out that this held true for her as well.

Zazou Hoffman is a 16-year-old from Santa Monica, CA. As a 13-year-old, having only shown locally, she decided to apply for the Ronnie Mutch Working Student Scholarship. She won, which led to working with respected East Coast trainers Missy Clark and John Brennan. Through hard work and commitment, by Jan. ’07 Zazou was one of seven elite riders chosen to work with Olympic Chef d’Equipe George Morris in Wellington, FL. She has competed in the Medal Finals for the past three years. She counts her win at the Maclay Regional, her 4th in “the Medal” at Harrisburg, her 5th in the USET Talent Search East at Gladstone, and her 3rd in the WCE amongst her notable accomplishments.