By Selena Frederick and Jackie McFarland 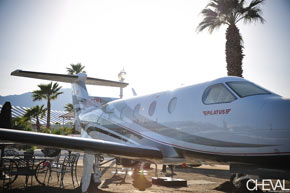 In what seemed a newfound rhythm for the HITS Desert Circuit, the winter circuit sailed relatively smoothly for six straight weeks. With increased entries and a positive response from many of the competitors we approached, we asked what was the formula for success this year? Challenging course designers, well maintained footing, improvements and additions to the VIP areas, big money classes, and of course the grand prix highlights from fantastic afternoons to fabulous evening events.

Beautiful sunsets and cool breezes welcomed the four World Cup Qualifiers in the intimate indoor arena. Actually for a majority of the six weeks the California desert weather was pretty perfect. To top it off, during the final week the facility sparkled with Lamborghinis, Rolls Royces and even a pristine private jet parked on site.

And that is just a short list. Stars of the circuit Rich Fellers and Lucy Davis each earned four grand prix wins, simply amazing. These two athletes and their horse mates, mind you they each won on different mounts, were fast, clean and cool as ice.

The hunter rings were bustling as well. West coast greats such as John French, Hope Glynn, Nick Haness, Chance Arakelian, Jenny Karazissis and John Bragg were vying for the various championships and derby wins. The ever-versatile John French, who won his usual lion’s share in this arena, also suited up for several outdoor grand prix events. French was seen ‘speaking’ both hunter and jumper on the same day, literally running from the jump off to the hunter derby, garnering top ribbons if not wins in both places. The calm, cool and collected French commented, “It’s an adrenaline rush with the jumpers and everything is so fast; I’m not used to being so hyper.”

Quite a few competitors, sponsors and spectators noted the family-friendly aspect of the area. Lamborghini of Newport Beach’s Director Donny Gath brought his entire family. As is often seen when outside sponsorship comes on board, Gath’s company became a sponsor after his 9-year-old daughter Kendal started competing at HITS two years ago, so it is both business and pleasure. Grand prix princess and high-school senior Lucy Davis mentioned that her family can easily come out from Los Angeles and watch her compete as well as enjoy the desert treasures. “My dad can golf in the morning, and then come and watch me ride in the evenings.” Internationally acclaimed rider Meredith Michaels-Beerbaum, also Davis’ trainer, expressed how nice it was for her to spend time in a family friendly environment. She explained, “In Europe the cold indoor circuits typically have late class times making it not very baby or family friendly. It’s also good to be back in California, and see people I haven’t seen in years.” Baby Brianna Beerbaum celebrated her first birthday in California with Mom (Meredith) and mount Lancaster winning the $25,000 HITS Grand Prix. Great day to celebrate.

Of course there were ups and downs. One particular grand prix Sunday took its toll on some top riders. Beginning the circuit with wins, Canadian John Pearce, as well as riding legend Hap Hansen, and the daring John Perez all took a spill at the same fence (#7). Unfortunately Pearce went on the injured list for the remainder of the circuit, whereas Hansen and Perez were able to walk away.

The close to the circuit $200,000 Lamborghini Grand Prix of the Desert was nothing short of poetic. After 53 riders attempted Olaf Peterson’s technical and big and wide course of jumps, five riders remained in the running for the $200,000 in prize money. The 90-degree southern California sun apparently didn’t faze the riders or the Sunday afternoon crowd. Cheers were rampant at the end of Lucy Davis and Nemo 119’s clear

jump off round, on a streak after winning three grand prix events in a row, as she crossed the timers in the lead.

The class was far from over with two riders left. next in the ring was speed demon Rich Fellers, aboard the amazing Flexible. And following that pair was Meredith Michaels-Beerbaum aboard the talented Kismet 50. The crowd gasped in disbelief as Rich and Flexible took the inside turn to the wide oxer heading down the last line and a rail fell. When the final pair of Beerbaum and Kismet 50 heading towards the first tall pink and white vertical – down went the top rail and Davis had clinched the win. It was a day to remember for competitor and spectator alike.

As Davis said in her interview with HITS after her victory, “I could never believe this in a million years. I was so happy to just win one Grand Prix and I kept thinking that there was no way that this could ever happen. Some of the best riders in the world were competing here today and to come out on top is just surreal.” (Read more in the HITS press release)