The chance to compete in two internationally acclaimed events in the same year doesn’t come often. Not to mention the even slimmer chance that one horse and rider team could potentially earn their way to BOTH the World Cup and the World Equestrian Games (WEG). However Rich Fellers and Flexible are on that powerful path.

Setting the standards high, Rich started off the World Cup qualifying season in the fall of 2009 with three wins. Well on his way to earning an invite to Geneva for the 2010 FEI World Cup Finals, Rich and the mighty Flexible traveled south from their home in Oregon to Thermal and then east to Wellington to solidify their position not only for the World Cup Finals but for the WEG as well. Leading the North American West Coast League in World Cup Points with one qualifier remaining, Rich and Flexible are Geneva bound in April. Since these two also showed they had what it takes in Wellington, the dynamic duo will also be traveling on one of the three European tours this summer as a potential WEG team candidate. We had a chance to sit down with Rich in Wellington. 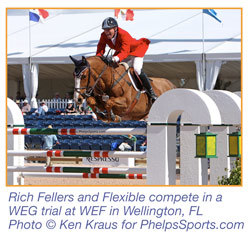 EqSol: The decision and plan to qualify for both the World Cup and the WEG?
RF: Originally last summer the main objective for big championship events for the future was the World Cup Finals. We wanted to redeem ourselves after Las Vegas* plus Harry and Mollie Chapman (owners of Flexible) really enjoy the travel, so we set our sights on Geneva and started in with qualifying last fall. Things went well, we ended up with some really good scores. Then in early December George Morris came out for his annual clinic at the farm in Oregon – we had dinner and discussed the possibility of the WEG. He was very positive and supportive of us giving it a go. He felt that the dates of the two events were far enough apart – April for World Cup and October for WEG – that it wasn’t too much for the horse.

So then we just started looking at different options for Florida for the winter. Do we do just the trials or the full circuit? Do we take all the horses or just a couple? Luckily it turned out that almost all of our customers wanted to go to Wellington. We started in Thermal to try and earn some good World Cup scores. The qualifying rules changed this year, a rider can keep up to eight scores, which is more than previous years. We went into the winter season with 72 points and although we had one rail in each qualifier we earned some good points. We were ready to make the trip to WEF for a few weeks.   *In 2008, Rich was second in the World Cup Finals. In 2009 he went into the final round in the 6th position and ended up with an unfortunate 30 faults, dropping him to 18th.

EqSol: Wellington trials and tribulations. Tell us about the WEG qualifiers from your perspective.
RF: The courses were super. Guilherme did a great job. He tested the horses and the riders equally, both in scope and technical questions asked.

Trial # 1: Thursday, February 25th, 7pm: Clean
Flexible started out great in the first trial on Thursday night by going clear. I thought it was really big, the rest of the riders agreed. It asked quite a few questions – a double oxer combination early in the course as a scope test. You had to be careful at the end of course with a vertical-oxer-vertical triple followed by a steady eight to a Liverpool oxer– big with tight distances, wide oxers and delicate verticals all towards home. That’s Flexible strong point, he’s very careful. We were all surprised that 13 were clear; it’s a testament to the preparation and quality of the horses and riders.

Trial # 2: Saturday, February 27th, 7pm: 16 faults
Saturday night was also a $75,000 Grand Prix. The course was more technical plus the jumps were, again, big and wide. It was an unfortunate night for me. The ONE stride in all five courses that I lost connection with Flexible was three and half strides away from a large triple combination. As we approached it from a left bend I went to make an adjustment to get my distance to A of the triple. He spooked and dodged off to the right. It happened so fast there was no chance for recovery, so I kicked and tried to get through. In the next eight seconds, I accumulated 16 faults. In hindsight I should’ve circled. It was a fluke occurrence, not something I anticipate with him.

Trial # 3: Wednesday, March 3rd, 3pm: Clean
Wednesday on the grass was the most difficult.* To walk into a new venue, jump the 1.60m Grand Prix as your first and only class is both physically and mentally challenging. The strong wind was a distracting factor – the way it makes things move that are usually still, the decorations, palm trees and it adds noise which excites a horse. It’s actually a great test for horse and rider focus. The best horses are very focused on the top rails of the fence and are not easily distracted. I remember walking the course and feeling the pressure of the challenge plus wanting to make a comeback after our 16 fault fluke. It was a very tough course but Flexible was a star. He cantered around like it was easy, very relaxed, and very rideable.

*The trial on Wednesday, March 3rd was held off property on a large grass field called ‘The Stadium’. The wind on that day was quite strong and the air cold. The other four trials were held in the International Arena.

Trial # 4: Friday, March 5th, 2pm: 4 faults
On Friday we were back in the International Arena for the $30,000 1.60m Classic. I actually thought it was the only breather, although not much of one. It required careful rides with a lot of tall verticals – not as hard on the horse as wide oxers but easy to rub. We had a rub on one of those tall verticals.

Trials # 5: Sunday, March 7th, 1pm: 4 faults
I predicted ahead of time and told my wife Shelley that the only scope test left was an oxer-oxer-vertical triple away from home. Sure enough Guilherme built that very test into the tough course for the $150,000 CN Grand Prix. That scope test is always a concern, especially for smaller horses like Flexible. After walking the course a couple of times, I made my plan and told Shelley I had to trust the horse. He was again amazing and skipped through the triple like nothing, not losing an ounce of momentum. I actually thought we were clean, but then didn’t hear a cheer from the crowd. Then I wondered, ‘What came down or was I over the time?’ I thought my pace was good… Turns out he didn’t clear the water, he has always been good about the water, usually stretches out well so it didn’t cross my mind. But that’s the breaks – I was still really happy.

EqSol: Winter Circuits and qualifying complete, now the plan is…
RF: The next phase to the plan is rest, refresh and prepare for World Cup Finals. We’ve been home since mid March and leave a few weeks later for Geneva. The barn isn’t planning to show again until May and then go to Spruce this summer for a few weeks. My son graduates from high school during the National, so we’ll be home for his graduation. As for Flexible, the World Cup Finals is a strenuous championship event plus travel. After that he’ll rest and show a few classes at Spruce Meadows, then head to Europe for the July-August USEF European tour, the CSIO’s in Falsterbo (SWEDEN), Hickstead (ENGLAND) and Dublin (IRELAND). We’ll see how that goes and whether or not we’ll be preparing for the WEG in October. 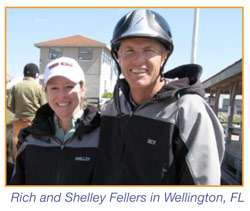 EqSol: What other horses will go to Europe?
RF: Hopefully McGuiness. He had an injury that we’ve finally diagnosed and we hope to start him back soon. Or possibly a horse will have to step up like Flexible did when McGuiness and Gyro were both injured. My wonderful wife Shelley told me the other day that she would let me take her fabulous young horse, Revenge, on the tour. He is probably one of the nicest horses we’ve ever owned. Shelley turned pro eighteen months ago when we started the business and shows him in the 1.40m division. She’s really good.

EqSol: Tell us about your barn and the Chapman’s, great supporters of the sport…
RF: We made a transition from being privately sponsored to opening the doors of our business in October of 2008. The Chapman’s, who had both owned the barn and sponsored the horses, decided they wanted to be clients and not barn owners anymore. So they sold the facility in the fall of 2008. Now instead of employing us, the Chapman’s are clients of ours and we run a small show jumping and sales barn.

Everything went very smoothly, although the ownership changed hands we were able to stay at the facility and start our business. It can be a challenging balance – our schedule is different than a lot of the big stables. We pick nice quality shows and rarely do an entire circuit. It was a big decision and expense to come to Wellington. But once the barn decided to come, we didn’t look back.

Harry Chapman was a very good rider, invited by the USET to go east and train with the team. He chose to stay in Oregon for school and a career. The Chapmans, as owners, are like the best horse you’ve ever had. They have stood up to the test of time. Their enthusiasm and support is undying – even when things don’t go well, they always believe.

We are grateful for Rich’s time and tales. We congratulate Flexible, Rich, Shelley, The Chapman’s and wish all the very best of luck on foreign soil – Switzerland, Canada, Sweden, England, Ireland and hopefully back to the US in Lexington.