A friend once reminded me to live my dash – she wasn’t referring to running or a type of seasoning, but the actual dash you see between the dates of a person’s birth and their death on their tombstone. It means to live life to the fullest, as that dash represents your entire life. She didn’t mean this in a morbid way, but as a reminder to live your dash with exuberance.

With a tremendous amount of impressive accomplishments at a young age, including a recent second place in the biggest money class for hunters in history, the $500,000 Diamond Mills Hunter Prix, Nick Haness is undoubtedly living his dash. 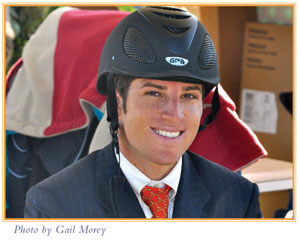 Equestrian Aspirations
Coming from a family of five boys, every brother was busy with his own interest. Nick started riding at age five at Coto de Caza, near his home. Gradually he began moving from one lesson to three lessons per week and spent his summer days in the saddle. After juggling soccer and riding for several years, Nick chose his sport. The rest is becoming a solid history.

Nick remembers feeling inspired as a young teenager while watching top riders like John French and Peter Pletcher compete. As his teenage years in the horse world progressed, his achievements further molded his future. One interesting milestone was choosing his first show horse wisely. Soon after he purchased a bay hunter named Carson, he got a Christmas present from his parents – the funds to compete for one week on the winter circuit in Indio, CA. Very excited about this opportunity, Nick didn’t just compete but he earned a Reserve Championship in the Junior Hunters. That very week, a trainer on the circuit inquired about buying Carson for his client. With a tremendous offer on the table, Nick made a mature decision to sell his horse.

His parents offered to give him the money from the sale to further his equestrian pursuits. Again making a decision that was wise beyond his years, Nick set up a small business. With the help of contacts in the industry, Nick would purchase a green horse in Europe, work with it and then sell it.

About this time Nick also began working with Jim Hagman of Elvenstar. Another turning point, Nick refers to that time period fondly. “Jim put me on the map. He gave me a makeover – changed my tie, my huntcoat, got me new boots – and put on the finishing touches that finessed my ride. I had instant success in the equitation ring with his help.” Nick also went to the east coast with Jim, including Devon and Indoors, garnering some valuable miles and making new contacts.

One of his favorite memories was the first time he went to Indoors. “Ever since I was on ponies I knew about the east coast kids, so showing up as the little guy from California that no one had ever heard of was awesome.” This experience mixed with the other teenage turning points sealed the deal for Nick.

“My dreams and years of wanting to go back east and compete all came true at that moment, and I realized it,” Nick explained. “I liked school and did well, but I knew I wanted a career in horses. I loved being a part of the horse show world.” Nick decided to turn professional at age 18.

All Business
Having business savvy from his junior experiences, Nick bravely jumped into not just the professional world but into having his own business by the time he was 20 years old. Not long after he connected with Richard Slocum at a clinic where they jokingly talked about how they should go into business together. Soon after they took their joke seriously. 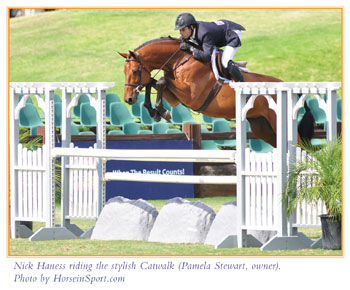 Covering all his company’s bases was a priority for Nick who is the first to admit the value in having someone older and more experienced around. “I’m fortunate to have Richard as a business partner,” said Nick. “It’s nice to have the security of a knowledgeable and experienced horseman in the barn.” Fortunately for both Richard and Nick, their strengths mix very well. Nick is the show rider while Richard handles the endless details of running a barn from the clients to the horses in training. Both have a knack for teaching and the clients have blossomed from their combined knowledge.

Now with a handful of professional years under his belt, Nick notes the rewards come at many levels. “When a student wins their first Maclay and they feel accomplished in their riding goals, that’s very rewarding for me.”

After a small but costly mistake in Round 1 of the CPHA Medal Finals this year, student Conor Perrin rallied and not only won Round 2 of that Medal Final but won every round of the CPHA Foundation Equitation Championships, 21 & under the following week. “I was proud of Conor. He learned a lot from that experience and we were all rewarded! When you help someone accomplish something they’ve been trying to achieve, it’s a pretty awesome feeling.”

Plans and Pursuing the Dream
Myriad circumstances changed the plans for attending both the $100,000 USHJA International Hunter Derby Final (Lexington, KY) and the Diamond Mills $500,000 Hunter Prix Final (Saugerties, NY) in August and September of this year. While competing on Havana at Devon in May, Nick was approached by Scott Stewart about purchasing the horse for his junior rider Victoria Colvin. “So I didn’t go to Kentucky due to the sale. But knowing that Victoria Colvin was seventh overall on Havana in the Derby Finals was just as rewarding as going myself.”

As much as they were looking forward to the Diamond Mills $500,000 Hunter Prix Final, a few weeks before the event Nick and his client agreed to wait. “It was a long trip to make when we were uncertain about the weather. We didn’t think it was a good choice for a sensitive horse to go all that way in unpredictable conditions.” Taking it in stride, Nick wasn’t planning to head east for the finals. About a week later, Archie Cox and the Singer family asked Nick if he would ride Cruise at the inaugural Hunter Prix Final in Saugerties. Nick had competed and won on Cruise in a Thermal Hunter Prix and had watched him go numerous times, so he knew the horse and was honored to accept the opportunity. “Jessica is in college at Skidmore, so she was there as well as her parents. They were just happy to be a part of it, they didn’t put any pressure on me.” The no pressure approach paid off, literally. Nick and Cruise represented the west coast well by earning a spot in the top 25, winning Round 3 of the Final (in the pouring rain) and coming in second overall, earning not just a beautiful ribbon but a check for $90,000.

“Just being a part of the first year was a dream come true. Really it was. As a kid I dreamed of experiences like this – great riders, TV, press conference – it was overwhelmingly exciting.”

Nick continued, “All the California riders were rooting for each other. I was proud to represent the west coast in the top four.”

Speaking of the west coast, an impressive seven riders returned in the top 25 and four placed in the top twelve. Reflecting for a moment in the sweetness of the victory, Nick also discussed the agony of defeat. Jenny Karazissis experienced the high of winning Rounds 1 and 2 on Saturday. She was riding beautifully on Sunday as well. When she rounded the corner towards the end of the course, her horse’s pace slowed suddenly and he took a brief trot step. The crowd gasped and scores reflected the pace change. “We were all shocked. It’s amazing in sports how dreams can disappear in a split second. Jenny handled it with poise. She’s such a fabulous rider and a top notch competitor.”

We know that Nick Haness is living his dash. And we congratulate him. Are you living yours?

Elitehunterjumper.com
Check out the cool new articles on Elitehunterjumper.com – Zazou Hoffman, Jenni Martin and Sharon Blake. While you’re there, list some sale horses. The prices are so reasonable and it’s such a convenient place for buyers to see your horses. P.S. – You don’t have to list the price!

Ad Campaigns
Remember to pick up your Winter issue of Show Circuit Magazine! EquestriSol is pleased to continue working with great clients, including Arwen Stables, Creative Saddlery, Mandeville Farms, Lancer Farms, Amy Brubaker and Elitehunterjumper.com. A special thank you to our clients for once again trusting all of your ad needs to EquestriSol.

EquestriSol specializes in creating effective, custom, integrated marketing solutions. To learn more about our services and what they can do your business, e-mail us at [email protected]

Chronicle of the Horse
Look for these familiar West Coast names, World Cup hopeful Mandy Porter and Elvenstar & Jim Hagman, in upcoming issues of the Chronicle. (We wrote these articles)