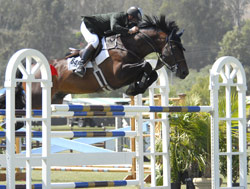 The Linda Allen course for last week’s $30,000 Oaks Classic Grand Prix was ‘tight’. With almost a third of the 31 riders garnering time faults and a handful struggling to fit in a snug seven strides to the last oxer after the water jump, it was aptly described by rider Guy Thomas as “technical and challenging yet not killer.”

Of the five that made the jump-off, four went clean and fast. Second-in proved best as Guy Thomas and Peterbilt stopped the clock at 43.094, edging out Susan Artes and Presto B by just over a second. The three other contenders – Kona with Francie Steinwedell-Carvin, Cassiato ridden by Harley Brown and last Peter Breakwell on Lucas – tried but didn’t succeed in catching those two top rides.

Thomas was proud of his homebred Peterbilt. “I’ve got a diamond in this horse,” he beamed. “He just keeps getting better and better.” The pair head to Spruce Meadows with his family’s Willow Tree Farm later this week for a month of shows in Calgary.

The Zone 10 results are in for the North American Junior and Young Rider Teams. Bringing in their two top scores from the six trials, the competitors had a tough week of classes not only resulting in two solid teams but also preparing these riders for the upcoming FEI North American Junior and Young Rider Championships presented by CN. Heading to Colorado Horse Park in late July, Zone 10 will be defending their title from 2007 where both the ‘A’ and ‘B’ Teams won the gold.

The only competition of its kind, the NAJYRC invites riders ages 14-21 from the US, Canada, Mexico, Puerto Rico, Bermuda and the Caribbean Islands to test their skills under FEI rules.

Good luck to our Zone 10 teams. 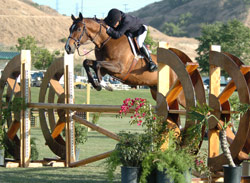 2008 marks the year of the hunter derby and as we’ve learned, it’s only the beginning. True to derby regulations, the $10,000 Hunter Derby at Oaks Blenheim took place on the Grand Prix field filled with natural obstacles. John French held the lead in both rounds aboard Jenny Van Konyenburg’s Type Cast and also garnered second aboard Aura. Once again there was a variety of entrants – juniors, amateurs and professionals – where hunters as well as equitation horses had the chance to hunt derby style.