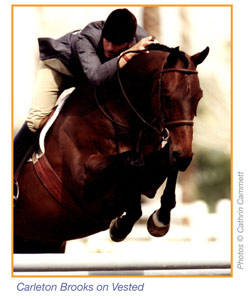 About a month ago, I wrote a really sad story about the death of my favorite horse of all time – Tustin. Fortunately, not all is lost, and though I have had to gain some patience and take a step down from the height at which I was previously competing, my parents were gracious enough to purchase me another jumper.

In the middle of April, my mother (who is also my trainer) and I traveled to Europe to find a promising young jumper prospect that, ideally, will eventually enable me to compete at the Grand Prix level. The trip was exhausting, fun, emotional, and a great mother-daughter bonding experience. Plus, I learned how to read a map really well – nothing like trying to find a hotel in a foreign country in the pitch dark to encourage the development of this skill! After what seemed like sitting on a zillion horses and driving every back road in Holland and Belgium, we were able to narrow our list down to three promising prospects – a five year old French gelding (Westin), a five year old German mare, and a seven year old Dutch mare. A multitude of traits caused us to choose Westin as our first pick. Even though he was a little younger than I had hoped for, he was ride-able, intelligent, and sweet…just like Tustin. 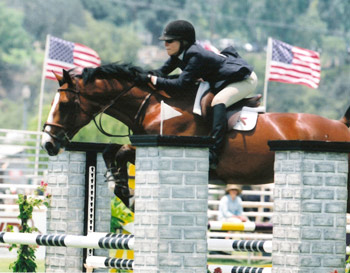 So with a clean vet check and one more test ride by the dealer (we had only tried him indoors, and wanted to make sure someone we trusted saw him jump around outdoors), we bought him. The two weeks between the time we arrived home from Europe and the time we wired the money seemed like an eternity, and he finally arrived in California during the first week of May. The day that my mom picked him up from the airport happened also to be my prom night, so I saw him for maybe five minutes before having to run off. Half of the people at our barn had already picked out his name before I even got to sit on him! Once he was mine, I absolutely fell in love with him. The first time I rode him at home, he acted wise beyond his years – didn’t spook at a single thing in our arena, essentially he behaved like a perfect gentleman. And he was super fun to ride!

After a few weeks of training him up a little bit at home, we took him to his first southern California show. We only did two Low Children’s Jumper classes and one Children’s Jumper class, but he jumped around the East Grass Field at the Oaks like he had been doing this forever. He’s such a game little horse. He’ll try anything I ask of him, even if I make a few mistakes. After a successful go at that height, we decided to start showing him in the Five Year Old Jumpers. What a great experience for me! Even though I’m not getting to jump as big as I had been with Tustin, being able to gallop around the Grand Prix field in my white breeches doing the Five Year Old Classics is every bit as thrilling as it was in the High Junior Jumper Classics. Warming up with and competing against Grand Prix riders on their young prospects makes me feel special, because, like them, I feel I’m now a good enough rider to train my own young horse. The “optimum time” classes are challenging – you really have to pay attention to the strides and turns the early horses in the class take, even more so than you would in a regular speed or Sec. 2B round. Learning to ride this type of class adds a new variable to my development as a rider and riding a smart, green horse like Westin is especially rewarding. I feel like every time I get on him he is more ride-able than he was before.

Now, I love Westin dearly and truly enjoy riding him, but I really wish he wasn’t mine. I wish I hadn’t made the trip to Europe last April to buy a horse, because that was a direct result of Tustin’s death. I wish I still had Tustin, who had already undergone the long and sometimes frustrating process of becoming a trained horse. Admittedly, if I had the option, I would prefer to be competing with my friends in the High Junior Jumper classes and chasing Prix Des States money rather than training a young horse during my last junior year. Every time Westin does something that isn’t absolutely perfect (lucky for me, this is rare), I end up comparing him to Tustin, and then I grumble “Well, Tustin never would have had that rail,” or, “I wouldn’t have made that mistake on Tustin,” which is unfortunate, because Westin doesn’t deserve this. He’s a fabulous horse.

A few weeks ago, after a Five Year Old class that didn’t go as well as I had hoped, I came out of the ring complaining to my mother about how Westin just didn’t match up to Tustin. One of my mom’s clients overheard this, looked right at me, and set me straight. “Laura, listen to yourself whining and moaning. I can remember hearing the same complaints two years ago about Parker (my hunter.) ‘Oh Parker won’t do this’ and ‘Oh Parker can’t do that’. Well look at him now, Laura, winning classes right and left. Westin will turn out just fine.” I am still a kid, often immature and impatient, but even I am old enough to know that her assessment is absolutely right.

After all, when I have my silly, little-girl dreams about becoming a Grand Prix rider, it is no longer Tustin who I am riding in these dreams. It is Westin.