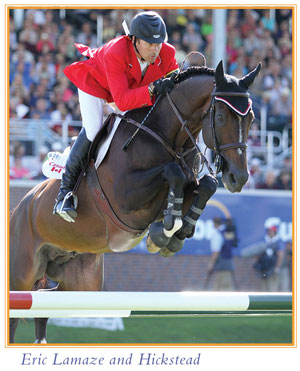 CN $1 Million
The best riders of the week had to qualify to compete in the CN $1 Million Grand Prix. Seemingly in top form, Lamaze and Hickstead looked poised to bring home the top prize. The Olympic gold medalists did not disappoint as they bounded through the difficult course with barely a rub in front of a record crowd of 89,632 fans.”[Hickstead] came into this tour in fantastic shape. From the first day he jumped very well,” Lamaze said.Two rookies jumped up to second and third places in the grand prix. Neils Bruynseels of Belgium rode Nasa to second place. “I gave everything, my horse gave everything. She was fantastic today,” he said.In his first CSIO 5* competition nineteen-year-old Martin Fuchs (son of show jumper Thomas Fuchs and nephew to Markus Fuchs) rode Principal S to third place after he was the first to go clear in the opening round.”Today with the first round clear, I was going crazy,” he remarked. “The crowd here is much better than in Europe, but don’t tell the Europeans. It’s a special day, one of the best in my life.”Course designer Leopoldo Palacios commented, “I’m proud to be here with this new generation.”This was the second win for Lamaze and Hickstead in one of the biggest classes in the world, the CN $1 Million. Along with the two victories, the pair has placed in the top five of this prestigious class for the past five years. Lamaze summed it up by commenting, “To win here and win this grand prix, it’s one we have all dreamed of winning. For me it’s just as exciting as the first time, if not more. When you have a great horse, you want to have this title attached to his name. The money is great, but it’s more than that. He’s the best horse in the world.”Almost certainly Olympic bound, look for these superstars in London next year.
7ads6x98y