What defines a successful breeder? Patience, skill, careful management and a wealth of knowledge are a given, but combining all those factors into a winning formula is an art.

We talked to two West Coast breeders who made it a point to prove that some of the very best sporthorses don’t have to fly over from Europe. Certainly not backyard operations, these ladies built names for themselves and their horses on the backs of their successful breeding programs.

Allowing for the fact that tastes vary – from fashion to wine and well-bred horses – Tish Quirk and Barbara Ellison may skew in slightly different directions, however they both possess an uncanny mix of the finesse, patience, know-how and planning that “breeds” success. 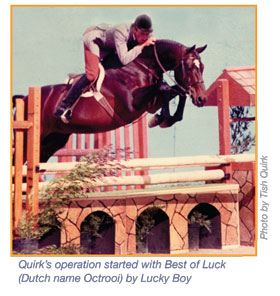 Four Sensational Generations: Lucky Lines
When Tish and John Quirk imported the Dutch stallion Octrooi (Lucky Boy x Ilonka) and gave him the name Best of Luck over 30 years ago, she never could have predicted the world this fabulous horse would create for her.

“Everyone who saw him wanted to buy him,” remembers Tish. “Every time we imported a horse by Lucky Boy, Best of Luck’s sire, it sold immediately. They were exactly the right horses for our market, and it just made sense to continue the bloodline right here.”

Best of Luck, who passed away in 2000 at the age of 28, became an indelible foundation stallion. Throughout his career, he was a phenomenon in the show ring, and he passed his most dominant traits on to his sons, Just The Best and More Than Luck. Tish is now showing the third generation offspring. Best of Luck sired FEI dressage horses, international grand prix jumping stars, excellent hunters and top-level eventers. And in this age of rapidly advancing science, Tish has more than Google searches to back up her knowledge. She began her education as a child in the family ranching, farming and livestock breeding business and continued to learn while she was buying horses in Europe. She learned to study “the whole horse and what made him what he was,” she explains. “Bloodlines are interesting but are not the end all of the horse. What’s more important for me is to know the horses.” 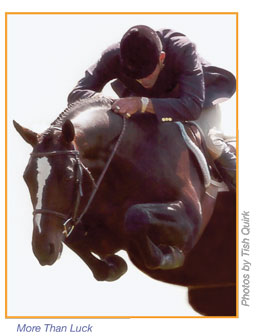 Working with top breeders in Europe who knew the bloodlines for four generations back, Tish learned that “what’s on paper, results and such, is deeply affected by who owns the horse and how much they compete,” she continues. “The heart of horses is not the papers, and it’s not on the Internet.”

Along that vein, for the last 30 years Tish has spent seven days of the week out in the barn, putting her hands on the Best of Luck progeny, knowing each horse from her daily interactions. Tish not only runs her own breeding operation but also oversees the mares when they foal. As the time of birth draws near, she stays in the barn bedroom and watches the mare’s every move on the monitoring system. She is at the mare’s side when labor begins, assists in the delivery and introduces the new foal to life outside of the womb. And she is available anytime to the breeders across the country who are part of her breeding family.

With accomplishments too long to list including champions at every national show in the country, from Devon to Del Mar, Tish’s breeding program has certainly illustrated that the proof is in the progeny. 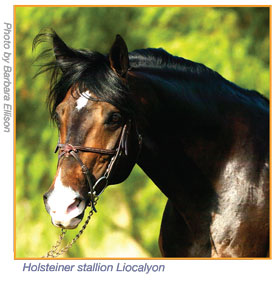 As an amateur rider in Northern California’s Woodside, Barbara juggled horses and raising children throughout the ‘90s. But as she collected a stable of stallions and her kids grew up, her goals began to shift. After purchasing her first stallion, Wizard, in 1995, then-trainers Butch and Lu Thomas sent her a tape of Holsteiner stallion Liocalyon and things started to pick up speed. The stallions Admiral Z and Lavita quickly followed, and one day she thought, “I should start breeding these boys!” Six years later, she officially began marketing Wild Turkey Farms with a bold ad campaign that has since become a trademark. 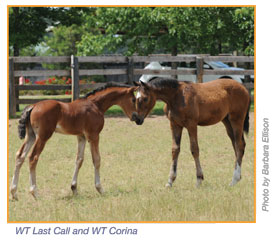 Barb also had a hand in the breeding of New Zealand rider Guy Thomas’ powerhouse stallion Peterbilt (Liocalyon x Jeribos). As the World Equestrian Games approach it is impressive to note that both Peterbilt and fellow Kiwi rider Katie McVean’s mount Dunstan Delphi are both by Liocalyon – and both horses will represent New Zealand in show jumping at WEG.

The success of her jumpers is one goal realized, and now Barbara is on the precipice of another. Ten years ago, she set in motion the dream of owning a horse farm. A native of Portland, Oregon, she’s always wanted to return to her hometown, and as her involvement with breeding deepened, she made plans to build her dream facility on 200 acres outside Portland. The new Wild Turkey Farm is now complete, and Barbara plans to be fully moved in by early next year. Among its many benefits, the new facility will have space – lots of it. Barbara looks forward to completing the move and having all of her horses in one facility, where she’ll have more time to be hands on every day.

She counts her mentors as the fellow breeders that she has built working relationships with: Hilda Baisel, DVM, Anke Magnussen at Royal Oaks and Matt Davis at Crooked Willow.

“I really believe that we can breed good horses in this country. We have the quality right here,” Barbara says. “In Europe people can go to a concentrated area and look at tons of horses. I’m hoping that as I get going, people will see that we have a lot of very nice horses, and they’ll shop on the West Coast.”

The Beat of Breeding Continues
By combining the elements of patience, skill, a good eye and extensive knowledge with a true love of horses, Tish and Barbara can rightly be upheld as examples of sporthorse breeding programs gone right. Whether active for 30 years, or half that long, these West Coast women are masters at breeding superb sporthorses.

Thank you Tish and Barb! See more at TishQuirk.com and WildTurkeyFarm.com.