Could we say that this class was an early in the season World Cup wake up call? While some of our top finishers from the last qualifier were away at Spruce Meadows, the thirteen efforts set by Michel Vaillancourt challenged each of the twenty-four entries in the second West Coast World Cup qualifying class, as not one managed to ride fault free.

One serious course culprit was the tight time allowed of 67 seconds. Only a third of the class rode within the time, the remaining sixteen riders accrued at least one time fault. The bend from jump one to two that began the course rode well for all, and not a single rail dropped in the option seven or eight oxer vertical line. Even for those who chose to ride the seven, time faults still accrued. Just a few dropped rails in the tight turn off the rail leading to fences three and four – an oxer to a tall plank vertical in a long three. Again very few had trouble with the immediate bend in seven strides to the left to fence five, the liverpool. The triple combination took its toll – a triple bar-vertical-vertical that rode very snug and forced the riders to continue on in four forward strides to an oxer – well over half the class caught one or two rails somewhere within that line. In this indoor setting the oxer at jump eight came up immediately after a right turn in five strides to a very forward one with a wide oxer as element B. Multiple riders did not make it across the width coming out of the double combination. Seemingly straight forward the oxer at fence ten came down a surprising amount of times – possibly due to riders thinking about the time allowed? The course finished up with a vertical at the top end of the ring, one other spot where there was no room to ‘add’ strides in the corner and make the time. Finishing to a left turn coming home over an airy gate in a long four strides to a sizeable oxer. 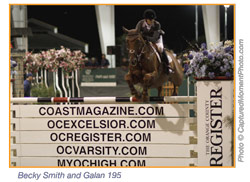 Becky Smith and Galan 195 (Audrey Halle, owner) were the only pair who managed to jump around without dropping a single rail. Recently imported, the big chestnut and Smith have only been in the grand prix arena together for the last month. Stopping the clock in 67.29, she finished with one fault. Usually a heartbreak score, on this auspicious day it was best of the class for the win. Placing second with just one rail at fence seven and within the time allowed was Percynality and Mexican rider Eduardo Menezes. The fabulous pair of Susie Hutchison and El Dorado 29’s Cantano came close, just a rail at 9A and just one tenth of a second over the time allowed for five faults. Good enough for third. The other five faulter, just touching the end fence enough to lower its height and finishing in 69.61 for fourth place was Helen McNaught on her own Caballo.

The next ribbons went to eight fault scores – both of these riders stopped the clock within the time but had two rails along the way. Joie Gatlin and Cameron Hills Quick Dollar and Lane Clarke aboard Kiss the Sky each had combination rails – for Gatlin it was jumping into the triple at 6A and the other coming out of the long double at 9B. And for Clarke 6C and 9B were the downfalls. Rounding out eighth through twelfth were the nine faulters each with two rails plus a time fault. Notable that two of these top twelve finishers were teenagers – college-bound Saer Coulter was eighth on Chalan and Stefanie Saperstein was tenth aboard El Sueno’s Quanto VL. The next World Cup Qualifier is next week at the Los Angeles International Jumping Festival.

Summer is sizzling!
From Calgary to Germany, San Juan Capistrano to Lake Placid, West coast riders are competing and winning all over the world! We welcome Paulo and Jennifer Santana of Santana Stables to California and we’re looking forward to working on a new campaign for Cam and Becky Smith’s Freelance Showjumping. Very soon we will be launching the long awaited Pegasus Show Stable web site, where we’re adding multiple wins to the results page each horse show.

Congratulations to all of the graduates – we wish everyone a fun and successful season. Next newsletter series will be at Showpark in July. Contact Tammy Chipko for GREAT deals! 818.472.5930