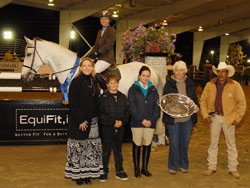 Congratulations go to Michelle Parker and Socrates on their win in the $35,000 Spring Classic III Grand Prix, the only pair to prevail over the Olaf Petersen Jr. (GER) indoor course on Friday, April 10th. The team maneuvered their way through what turned out to be a crash course for many a horse and rider. Challenging elements included but were not limited to jump two, a large EquiFit, inc. plank oxer at an angle towards the audience, the triple combination mid-way through the course, number nine the plank vertical that came up quickly and was placed right by the gate as well as a wide oxer at fence eleven.

The almost clean four-faulters were among the top ribbons, fastest was Ali Nilforushan on his new mount Green Sleeps Vioco who took second, followed by Suncal’s King and Joie Gatlin. Kasey Ament rode well on Siendifie ending up with four and fourth. And so on, with the tenth place Santika and sixteen year old Samantha Harrison having twelve faults. Simply getting around the course was a feat, as six of twenty-one entries did not make it through to the final jump. 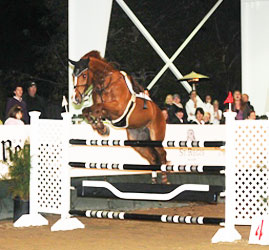 One rider had a fall with only the last line left to go. Her horse decided he hadn’t jumped enough, so he schooled himself, galloping around and gleefully leaping over not just one vertical, but over some rather tall bushes, back over the vertical, and around to the two-stride combination, tossing his head at those who attempted to catch him and avoiding those who wisely tried to keep him from jumping out of the show arena.

A real crowd-pleaser, as all who watched in amazement laughed out loud at the antics. Several minutes later all was well, the rider was unharmed, her horse was well-schooled and the show went on. Photos © Flying Horse Photography.

This week in Las Vegas four West Coast riders along with a California-based Australian will compete alongside forty or more top ranked international equestrians for the world title and some big time prize money. Recognizing these individuals for achieving the honor of qualifying, as well as horse/rider combinations who have earned more than 25 World Cup points in the U.S. West Coast League during the 2008/2009 season, each rider has the chance to practice over a non-judged, simulated course in front of a live audience before they head to the Finals.

Prior to the start of the $35,000 Spring Classic III Grand Prix, the riders were given three minutes to jump, and re-jump if they so choose, all or part of the indoor course set at a “soft height” (1.50m). Four horses and three riders participated in the exhibition – Ashlee Bond rode both Chivas Z and Cadett 7, Ali Nilforushan took Warco Van De Holhoeve and young New Zealand rider Anna Trent, in the US to compete at the World Cup Final, tested her indoor skills on Levitation. Few rails fell, so it appeared to be a positive school for these four horses as they head to Las Vegas. Best of luck!

Blenheim Spring Classic II: No Such Thing as Can’t for Cantano! 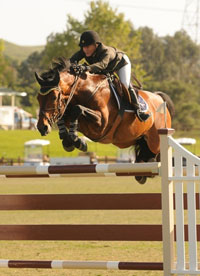 Flashback to the 2008 show season where a beautiful bay stallion ridden by a veteran show jumping great made an outstanding debut in the Grand Prix field. Win after win this pair proved their prowess throughout the season. Welcome back to the winners circle Susie Hutchison and Cantano, owned by El Dorado 29, who were picture perfect in the $35,000 Spring Classic II Grand Prix on Saturday, April 4th.

Ninth in the ring and first to go clean, Susie and Cantano set the stage for a five horse jump-off. The track proved to be just tough enough for numerous four-fault rides, including a tricky triple combination line that resulted in a bit more than a rail for some riders in a class of twenty-five.

As with the first round, so it was with the jump-off – Susie and Cantano took the lead going clean in 41.15. Next in Chris Pratt aboard Indigo Farms G5 took a shot at the lead, clean in 42.68, which ultimately was good enough for third place. Erin Duffy had a great time on Cavalier Knight, owned by Wendy Wilkinson, but also had one rail down, landing them in fifth overall. Max Dolger rode his own Vulkan Du Martalet CH neat and clean in 48.86, leaving just Eddie Macken and Tedechine Sept, owned by Robinson-Ballantine. Out for the win, the pair came very close, crossing the timers in 41.34, just under two-tenths of a second slower than the winning time. Photo © Flying Horse Photography. 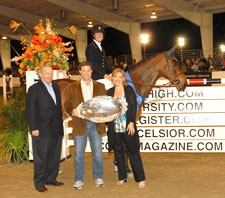 Kicking-off the 2009 Blenheim EquiSports horse show season, the $50,000 Orange County Register Grand Prix on Saturday, March 28th was the final of eleven World Cup qualifying classes held on the West Coast. Out of fifteen entries, three riders finished fault-free. Mandy Porter rode San Diego, owned by Danielle Korsh, to the win in an exciting race-to-the-finish jump-off. Tough to beat, Canadian rider John Pearce aboard Chianto went fast and clean in 37.59. Although also fast, 37.91, Richard Spooner and his mount Cristallo had a rail down for four faults. Porter atop San Diego beat the boys cruising around clean and fastest of all in 35.51. The victory confirmed Porter’s top position on the World Cup rider list.

When asked about the difficulty of the Grand Prix course created by Canadian Peter Holmes, Porter said, “The course gave us good prep for the World Cup Finals in Las Vegas. I think it sends us [riders] away on a positive note.” Photo © Flying Horse Photography.

Four Riders and an Australian

As many of you know, based on points earned over the 2008/2009 World Cup qualifying season, the top three riders (not horse/rider combinations) are invited to compete at the 2009 Rolex FEI World Cup Finals, held in Las Vegas, NV. The results of a truly exciting season placed three fabulous US riders in those spots, Mandy Porter, Ashlee Bond and Richard Spooner. Two international veterans and one rising star make up a very viable threesome representing the West Coast. Mandy will ride San Diego whom she has taken from the junior jumper arena into the indoor World Cup arena with grace and beauty. To be commended, as the pair just started together as the season began last fall. Ashlee will be aboard her relatively new mount, Cadett 7. The team did well last summer in outdoor venues such as the international field at Spruce Meadows, but were unproven indoors. Two wins and many solid placings later, they earned a well-deserved spot on the list. With a solid string to choose from, Richard is planning to take Cristallo and Ace and determine which will be his World Cup mount once in Las Vegas.

Next in line to compete would be the fourth in the point standings, and if they decline, the fifth, and potentially the sixth if the fifth in line choses not to compete. Unprecedented events occurred this year, as Gold Medal Olympian Will Simpson (ranked 4th) and previous World Cup competitor Jill Humphrey (ranked 5th) voluntarily stepped aside to allow Rich Fellers (ranked 6th) to be the fourth rider from the West Coast. Truly sportsmanlike as this is not a team competition, hats off to Will and Jill. And what a coup for the West Coast as the 2008 World Cup Final second place finisher, Rich on the phenomenal Flexible step up to participate in 2009.

Lest we forget our foreign riders who make California their home away from home, Harley Brown piloted the talented Cassiato to wins and top ribbons throughout the season, resulting in enough points to represent Australia in Las Vegas this World Cup.

More on all these riders in our World Cup Preview in this edition – click here. 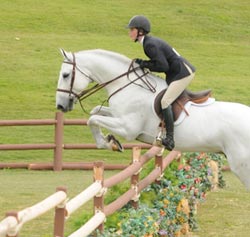 Five teams rode in triplicate during the Blenheim Spring Classic II in the first Hunt Teams class on the west coast in many years. Erin Duffy’s team of three went home with the blue. Never dull, we hope this class comes back next year!

The west coast’s third $10,000 ASG Software Solutions USHJA International Hunter Derby of 2009 illustrated yet again that when challenged our hunters can rise above. With each Derby our riders and horses are faced with new questions. If they have trouble ‘answering’ them, you can be certain this class offers some great schooling at the least.

The main trouble spot on the Scott Starnes course turned out to be the natural verticals set between the grand prix field and the hunter field. Not something these 24 show horses are asked, or trained, to do – jump out of the arena! And with another vertical in sight two or three strides away. Caught many a horse and rider off guard. A handful of hunters answered the questions asked with style and came back in Round 2 with more pizzazz. With plenty of room to gallop boldly and show handiness over a trot jump and a natural vertical-to-vertical bounce, a few moved up with measurable bonus points awarded for their handy efforts. As always a great class to watch and we take our hard hats off to those who hunted around in true derby fashion. Photo © Flying Horse Photography. 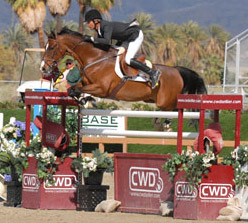 Sunday, March 16th
On a cool, breezy Sunday the HITS DC Championship Week comes to an exciting close with six horses racing against the clock in the jump-off, including Guillermo Obligado on Suleyman de Wulf Selection, World Cup contender Keri Potter on her mount Rockford I, Master of Faster Richard Spooner riding Cristallo, veteran Eddie Macken aboard Tedechine Sept, Canadian Jill Henselwood on Special Ed and Olympic hopeful Will Simpson on El Campeon’s Tosca, in the $200,000 HITS Desert Circuit Invitational Grand Prix. Only two managed to go double clear and we congratulate Richard Spooner and Cristallo on their victory.

The west coast was honored to host the R.W. “Ronnie” Mutch Equitation Classic. Challenging by design, junior riders were on their own for every aspect of the class – walking the course, preparing their horse and making decisions about the ride – plus the track included some technical adjustments and stride options. On top of all that, the class went at night under the lights in the Grand Prix arena and the weather was windy to say the least. The wind picked up towards the end of the second round, leading to management deciding to complete the class on Sunday morning. Congratulations to Carly Anthony riding the beautiful Vogue to the win, just one point ahead of Shelby Wakeman on San Francisco. 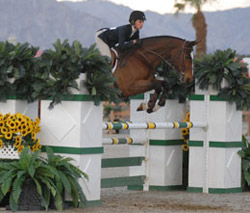 Congratulations also to Tache Rouge and John French on their win in the $10,000 ASG Software Solutions/USHJA International Hunter Derby Classic topping a talented field of handy hunters. Held under the lights in the Grand Prix arena, professionals, amateurs and juniors competed in this special class. Under the scrutiny of four judges, the top 12 horses hunted around two rounds of courses that included a snake option jump, liverpool, trot fence and the anticipated long gallop to the last oxer.

All three of the highlighted events drew a great crowd. No matter what the weather, spectators had fun and participated in cheering on hunters, jumpers and eq horses.

To view all of the HITS Thermal press releases, please click here. 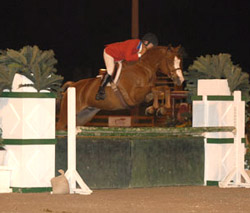 We’ve listed the Desert Circuit Champions and Reserve Champions by division below – congratulations to all the exhibitors and we wish you continued success throughout the 2008 show season.