Tuesday, August 18th: Kosti
Tuesday morning found us with sand paper eyes and rumpled clothes. Jenny and I were standing under threatening skies and the odor of steaming tarmac in front of the baggage claim at the Cincinnati Airport. We were waiting for Peter and Tonia Looker, the owners of Forbes and Aragon, the horses that Jenny was to ride in the first ever International Hunter Derby Finals held at the ever-expanding Kentucky Horse Park. Peter and Tonia arrived in a large rental car with a cavernous trunk that barely accommodated Jenny’s three forty-five pound bags and my carry on. The one-hour ride to the inside of yet another hotel room was uneventful. A short nap and we were back in the rental car on the way to the Horse Park.

As we left the drab scenery made up of hotels and Waffle Houses that seemed to out number the McDonalds in the multiple strip malls, things began to change dramatically. Suddenly we were seeing miles of perfectly maintained fence lines surrounding beautiful pastures covered with actual Kentucky bluegrass (I don’t care what anybody says, it’s green). Perfectly stacked limestone walls defined the entrances to one stunning farm after another. The Kentucky Horse Park is spectacular. From the logo and vistas to the footing, management, arenas, stadium and stabling. We arrived to find our horses meticulously cared for by Rick Fancher and his Milesaway Farm’s charming and helpful staff. We rode and schooled our horses. Later that afternoon we enjoyed a private tour of the USEF Headquarters by AHSA past-President Alan Balch who happens to be a close friend of the Looker’s. Peter was Alan’s right hand man during the highly successful 1984 Olympic Games in Los Angeles. The USEF staff was very gracious and cooperative. It was nice to put a face and location to the people we talk to every now and then.

Wednesday, August 19th: Jenny
On Wednesday I showed my horses in the medium schooling jumpers in preparation for the Derby. Both of them were very good. Aragon felt a little fresh so I galloped him around the cross country course which was something I’ve never done before. Definitely beats longeing, Kentucky truly is horse heaven.

Thursday, August 20th: Jenny
Today I stepped it up a notch and did the high schooling jumpers. I was worried that my horses may be peaking too soon, as they had never jumped better. Kost felt it was due to the outstanding footing and I wholeheartedly agree. Keri Kampsen rode On Top in the Regular Working Hunters on Wednesday and was very competitive. She chose not to finish the division on Thursday. John French, who had been in Europe the week prior, arrived Wednesday and decided to wait to show his mount Rumba on Thursday in the medium schooling jumpers. We were allowed to hack our horses in the Johnson Arena where the Derby Finals would take place from 3:30 – 5:00p.m. This is the same arena where riders from around the world will compete in the 2010 World Equestrian Games. 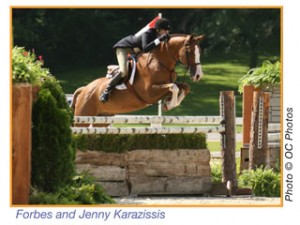 Friday was the big day – the first round of the finals. 60 horses qualified. To establish the order of go, they took the bottom 30 horses in the national rankings and randomly drew the first half of the class, followed by a random draw of the top 30 horses for the second half of the order. This ensured that someone like Jennifer Alfano and Jersey Boy, who won an award for the most money won during the qualifying season, would not have to go first. I drew 28th on Aragon and 50th on Forbes. Keri and John both went in the second half of the order. We were given the classic hunter course diagram that night.

Friday, August 21st: Jenny
We were allowed to walk the course prior to the start time of 8:00a.m. It was very inviting and the jumps were absolutely beautiful. I had a couple rubs with Aragon and ended up 27th just out of the top 25. Forbes, On Top, and Rumba all made it to the next round. John and Rumba won the first round. The top 25 start with a clean slate going into Round Two, so Friday evening they had a draw party to determine the order of go. The riders were asked to pick a silver cup that had a number engraved on the bottom, you then got to keep your cup along with various other gifts. I drew 13th which I consider to be a lucky number. Kerry drew 9th and John 14th. Each of the top 25 also received a check for $1,000.

Saturday, August 22nd: Jenny
Round Two was scheduled to begin at 6:00 p.m. During opening ceremonies the riders paraded around the ring while the announcer spoke briefly about our accomplishments. George Morris, who is responsible for bringing this fabulous derby excitement back to the hunter ring, spoke eloquently to the crowd and thanked the sponsors – title sponsor ASG Software Solutions along with Dietrich Equine Insurance, Walsh Harness and Saddlery, Charles Owen, Dover Saddlery, Essex Classics, The Clothes Horse, Personalized Products and Grand Prix – for making this dream possible. He was also one of the eight judges for the Finals. 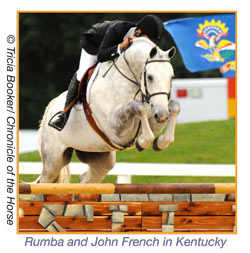 This round was also a classic format but the four sets of judges could give up to 10 bonus points on top of their regular score for style and quality of movement. I had a rail down at one of the five option jumps. In hind sight I wish I had done the lower 3’6” option. I didn’t see Keri go but she said she had some difficulty at the squirrel tail jump. The second you exited the ring the media pulled you aside for an interview so I also missed John’s round but I could hear the crowd go crazy when it was over. His score was 400 including the bonus points!

Not making the top 12 was very disappointing mostly because the handy course looked like so much fun to ride. It had its challenges and caused trouble for some of the riders. Trying to get over my disappointment I sat in the stands to watch the exciting finish with my mom and niece who came all the way to Kentucky to support me. John had a very big lead going into the final round. Jennifer Alfano sitting in 2nd place put the pressure on after taking a very handy track and her horse Jersey Boy jumped brilliantly. Since I’ve competed against John week after week back home I was confident he could handle it. And sure enough he did just what he needed to do to insure the win, taking the title in the first ever USHJA Hunter Derby Finals.

Sunday, August 23rd: Jenny
After unwinding from all the excitement we were able to get four hours sleep before catching an early flight back to San Diego where our barn, Far West Farms, had been competing all week.

Even though I personally would like to have had a better end result, I am so grateful for the opportunity that Peter and Tonia Looker and their horses gave me. It was an honor to both witness and participate in an event of this caliber. I hope to return in years to come.

Thank you, Jenny and Kosti, for taking the time to journal your experience.