Meredith Michaels-Beerbaum on Motherhood and Medals
Life as an international professional rider and trainer is physically and mentally demanding. Once you’ve been #1 in the world, the pressure to keep your name at the top of that list is always at the forefront, meaning you need to stay focused, fresh and keep a solid string of talented horses. So what does this intensely competitive, first-ever #1 ranked female rider in the world, three-time World Cup FEI World Cup Champion think about adding motherhood to the mix?

“I LOVE being a mom!” exclaimed Meredith without hesitation. When out of the saddle Meredith is often seen with 18-month-old Brianne in her arms. Uncharacteristic of a world champion? Apparently not so for this uniquely talented, focused and determined mother.

Since her equestrian goals still include Olympic aspirations, she and partner Markus have a plan and have considered every aspect. Already an extremely successful equestrian power couple, Meredith often mentions how Markus is a key to her success. As rewarding as her career with him at her side has been to date, and apparently continues to be, they now potentially have the ultimate reward, a family.

Becoming a mom may have changed Meredith’s perspective, but it hasn’t slowed her down — she made the German team only weeks after giving birth to Brianne in February 2010, something she hadn’t anticipated. It was “a nice surprise” and a memorable year, as Meredith competed on Checkmate in the German Championships in Munster and then headed to the states to represent Germany at the Alltech FEI World Equestrian Games in October 2010. Her clean ride on Checkmate clenched the Gold Medal for Team Germany.

“I never would’ve dreamt that was possible, it is one of the highlights of my career,” said Meredith about her return to intense competition as a new mother. And the victories continued into the fall season, as she collected a World Cup Qualifier win in Lyon and the Mercedes German Masters in Stuttgart. Alll before Brianne was one.

Thermals Aren’t Needed
Hosting several indoor World Cup Qualifiers as well as outdoor grand prix events each week, the HITS Desert Winter Circuit is a destination for show jumpers from both coasts and around the world. A California native, Meredith came from Germany to spend a warm winter in the Palm Desert. Leaving the chilly winter indoor European competitions behind, Meredith and husband Markus brought baby Brianne, and a few of their up and coming mounts, out to the sunny desert. Shutterfly and Checkmate remained at home, where Meredith would return to compete in the spring.

“I’m really enjoying myself here,” Meredith said of the desert. “It’s great to be with people that I haven’t seen in awhile. I’ve received such a warm welcome and I love the weather!” The desert sunshine and palm trees are a welcome change from the cold, late night indoor winter circuits in Europe. For Meredith, Markus and Brianne, who celebrated her first birthday in February, Thermal offered sunshine and a place to call “home” for the winter. With a reasonable show schedule, they were able to have some “remnants of family life.”

Horses and Clients
Thermal also proved to be a good circuit for the string of horses they brought over. The good footing, indoor and outdoor grand prix schedule along with the spacious show grounds allowed for horses like Kismet 50, a 10 year old Belgian mare to move up the ranks. “Kismet’s been the second horse in Europe,” said Meredith. “This circuit is her time to step up – she’s been consistent and is a very talented mare. I have a lot of faith in this horse.”

Lancaster is a German bred gelding and another up-and-coming prospect. “We decided to keep him in the outdoor because he’s SO big, (17.2h) and he’s done really well. We are very proud of his performance out there.” The Beerbaums also brought two 8 year olds over, whom Meredith believes to be “the best young horses in the world.”

Joining the Beerbaums in the desert were professional Gaby Salick, also a mother of a young daughter, Eleanor, and students Lucy Davis, Saer Coulter and Christi Israel. Developing these riders into international contenders also influenced the decision to start the season at HITS Thermal. Seems that Lucy, who is college bound in the fall of 2011, may follow in Meredith’s footsteps. An accomplished equestrian when she met up with the Beerbaums in the summer of 2009, the uniquely focused and talented rider has excelled under their tutelage.

Directly after Lucy won four grand prix classes in a row, including the $200,000 Lamborghini Grand Prix of the Desert, Meredith was off to Doha, Qatar to compete on the Global Champions Tour. Immediately back in form with Shutterfly, the pair was 3rd in the Grand Prix of Qatar.

The horses and the clients joined the Beerbaums in Europe this summer.

Brief Update
Competing in five Global Champion Tour events since spring, Meredith has earned close to 100,000 euros. She recently won the ‘Preis von Europa’ (Prize of Europe) at the prestigious CSIO 5* in Aachen, Germany on her horse of a lifetime Shutterfly. Now 18 years old, the Beerbaums decided that victory would be Shutterfly’s last and held his retirement ceremony in front of 40,000 fans before the jump off of the Grand Prix a few days later. What an amazing experience to win and then retire the world’s best horse at the world’s best show.

Thank you Meredith for your time. We wish you all the best with your continued quests and with your family. And happy retirement to ‘Petey’!

An Afternoon Chat with Linda Allen
Yet another world-renowned course designer, Linda Allen, sat and spoke about designing and beyond. Her talents were well utilized at Blenheim June Classic I, where she not only built for many jumper divisions, the $30,000 Grand Prix but also the tracks for the final Young Rider trials. We sat with Linda and her canine companion Willow. This endearing Papillion pup is making her debut in Aachen this summer. Lucky dog! 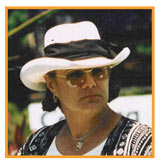 EqSol: How did you become a course designer? What is your horse history?
LA: I rode for a number of years mostly on horses I trained myself – thoroughbreds off the track. I competed up to the international level. Due to back injuries and a number of surgeries, I had to quit riding. But I wanted to stay in the sport. Course designing was the way I chose to do so.

As I rider I realized what an important role the course designer played in whether you advanced as a rider. So I learned the mechanics by setting for small shows. I’ve been designing as a career steadily since ’82.

EqSol: Your course design mentors?
LA: When I competed I became friends with Pamela Carruthers and often picked her brain. Also Bert de Nemethy and Dr. Arno Gego. How do you determine difficulty for these important Young Rider trials?

LA: It’s a two-fold situation – the Zone wants to send the strongest riders it can. But the trials shouldn’t be the end game; instead they lead up to the event. I try to provide the building blocks for riders for future events without discouraging them. The right team for this given year should be clear based on the results.

It’s great for the riders to have the trials over three days. The format follows the championships – the difficulty builds up height wise and can go to 1.50M. If a rider doesn’t do fairly well here they aren’t likely to make the team.

The courses ask a lot of different kinds of technical questions. Using the water a lot – because usually at that event the open water is a big factor.

EqSol: How the course like the one today evolves for you…
LA: It’s difficult because you have three important classes in one week. I want variety from one class to the next – to not repeat the same questions. So first I develop the key elements – combinations and technical lines and then build from there. Sometimes it happens in ten minutes, other times it takes much longer. Either time you fool with it a lot until you are happy. Focus on protecting…

LA: Today I designed the Young Rider tracks first and then tracks for the other classes. When designing for grass you have to move jumps a lot, thinking about not only where the jumps are but also where they will be – because of the ground. First you protect the horses, try to keep their work as pleasant as possible. Protecting the horse in turn takes care of the rider. A close second here is protecting the grass – keeping the ground not only good for Sunday but for the upcoming weeks. And last, but not least, you take care of the ring crew – they work hard.

Along with course designing across the world for many years, Linda has a long list of accomplishments including developing an organization, publishing a book, 101 Jumping Exercises for Horses, and giving clinics.

EqSol: Can you tell us about your involvement in the development of young jumpers?
LA: I helped to start this organization in the US that has evolved into two programs – the International Jumper Futurity for breeders and purchasers of young horses which consists of three different opportunities for four-year old showcases – East, Midwest and West Coast. And the Young Jumper Championships developed from the IJF for nominated 5, 6, 7 and 8 year olds.

We’ve grown this year, which I am impressed with since this is a trying time in the industry. Although things are slow to change, we are building the foundation for developing young horses in a systematic way. It is still challenging, there is no culture or system for young horses here. Some in the sport have more interest than others.

About fifteen years ago Germany developed a completely different approach. You cannot build for Young Horse classes without a special license – it’s a minimum of 10 years to get to the highest ‘S’ level. Young jumper classes are scored, not timed. Each round receives a 1-10 score for quality of jump, carefulness, rideablilty – a horse you want to take home. The horses are beautifully broke with a lofty jump. The concept was very unpopular at first. All the jumper judges had to get a new education. Some fabulous riders came from this division like Marcus Ehning, Marco Kucher, and Christian Ahlmann. It’s taken very seriously. Germany is the only country that does it this way.

Side note: In a country so devoted to the ‘hunter’ and its scoring system, is this German system worth considering in the US?

EqSol: And your future plans?
LA: Heading to Aachen later this month, I’m going to present a paper there. I’ll stay on to spectate throughout the show, the only way to stay current in our game. Frank Rottenberger is the resident designer. He took over some years ago and does a good job – he was one of my assistants in Atlanta.

Probably over the last five years I’ve accepted more clinic dates. So I’m booked with more riding clinics than designing now. I truly enjoy teaching. I’ve become more particular about where and when I build. I’m designing in Oregon next and for the Fidelity Classic on the East Coast. I’m also on the Ground Jury for the 2010 WEG in Kentucky.

EqSol: Are you planning another book?
LA: I did complete a DVD on course building, mostly for course designers at smaller shows to help them with technique. So they can get better results with less work and more tips to stay out of trouble.

I’ve been planning another book for awhile, I just don’t seem to have that chunk of time needed to get it written. I have a publisher that wants a more general topic – course designing doesn’t draw a wide audience. I’ve got a few different ideas. Someday…

Wishing we were joining you in Aachen. Someday… Thank you Linda and Willow!