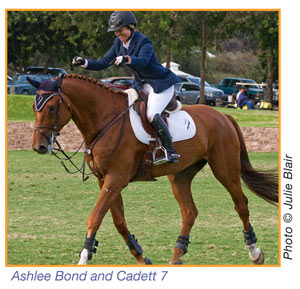 I recently had a chance to interview the invincible Ashlee Bond. Last week in the $40,000 Summer Classic Grand Prix she was first, fourth and seventh on her three entries in a class of 56 horses. She has taken the show jumping world by storm and continues to ride that winning wave. Ashlee has had an uncanny raw talent since she was a little girl on ponies, winning from the moment she stepped into the show arena. She didn’t know nor understand her ability – when her father, Steve, asked her if she realized what she had done when she was champion at the Pennsylvania National Horse Show at age 11, she commented, “No, not really, but I sure had fun.”

Like many young girls, Ashlee has Olympic dreams. Also a southern California girl originally, the young Meredith Michaels Beerbaum would state that she was going to be the number one rider in the world. These aspirations mixed with years of work, an intense competitive edge and the right horse equal to gold medals, World Cup victories, European Championships and more. This is not luck. The lucky part is that this phenomenal horse, Cadett 7, and rider have found each other. Like Meredith and Shutterfly, these two flow together so flawlessly it’s poetry in motion.

EqSol: Where to start… Does it feel like a dream or a path?
AB: It feels like a little bit like both – it’s always been a dream to get to the top, it also feels like it’s meant to be. I think it’s cool to have proven that this is where I belong, that I am on the right track.

EqSol: Remember when we interviewed you just two years back when you were one-two here at Blenheim on Southern Girl & Tommy Gun…
AB: That was when I had just come back from taking some time off – getting my feet wet again. It was a good start. The win helped build my confidence and boosted the rest of my career. I knew I still had a lot of work to do and I needed a legitimate 1.60m horse.

EqSol: Those two mounts were homebred. Any plans to continue with the breeding program?
AB: Yes! It’s a great partnership between my dad and me when we work with the babies. He breaks them and I train them over fences. We have a seven-year-old Super Girl [Best of Luck x Surfer Girl] that we bred. She did the futures at HITS and was fourth in 1.35m this week. She’ll go to Spruce Masters with us. I think she has a big future. I have high hopes for her. We also have two four-year-olds, Good Girl [Good Times x Super Girl] and Moondoggie [Lord Continuet x Southern Girl] and two Indoctro babeis now three-year-olds, Isabella and Gidget. They all show great natural talent and will come along end of this year, beginning of next.

EqSol: Tell us about buying Cadett – when you first tried him did he feel like ‘the one’?
AB: Ilan Ferder found him in Europe for Aurora Griffin from top Swedish rider Lotta Schultz. The moment we saw Cadett in the Meredith Michaels Beerbaum clinic in Thermal almost two years ago my dad and I both saw something in him. We told Ilan to please let us know if he was ever for sale. Then it all just magically worked out. Aurora only had him for seven months when we tried him in June of 2008 – right before we were leaving for Spruce – I rode him once and it was a perfect fit. I competed on him the last two weeks and on the final day of the second week I won the $75,000 Sunlife Financial Grand Prix.

We realized that he needed conditioning so once we were home we put him on the treadmill every day. He also had to learn to trust me – he’s a careful horse. You never know if a horse will step up, but every time we went in the ring our partnership kept growing and growing – beginning in Thermal this year and in Europe it exploded. I couldn’t have imagined we were going to achieve anything close to what we accomplished. It was amazing.

EqSol: Starting with your indoor season ending in Vegas at the World Cup Finals – give us your thoughts on your rides, the courses etc.
AB: At the World Cup I made an error in each round that caused me a rail. I was close each day – but not as good as I would have liked. Thermal prepared us well. But it was huge. Anthony D’Ambrosio was spectacular and did an amazing job. It was an eye opener to what was to come in Europe.

EqSol: Your thoughts when you walk those big European courses…
AB: At first in Europe I was the alternate for the team, so I had to prove myself. When I walked the 1.50m speed class, the qualifier for the Grand Prix, I knew I had a shot. I thought ‘this is my opportunity to show them I belong here.’ And I did it! I was the only American to place that day (7th). And then George decided to put me on the team. We walked the Nations Cup and I was pretty calm. I still felt like I needed to put the pressure on and prove myself. I was clean in the Nations Cup, both rounds. Actually I was clean in each Nations Cup – La Baule, Rome and St. Gallen. My dad said the FEI claimed that had never been done – fault free six consecutive times. It’s been quite a summer! I have an amazing support team. I am very close to my family. My parents are incredibly supportive through thick and thin. My dad is an integral part to our program. Richard (Spooner) and I work great together – he knows my horse and me. Plus I know myself, and I am confident in us as a team. I don’t over-analyze the courses – I don’t change my ride because of where I am and what level we are competing at. So each course I stay true to who I am and my instincts.

EqSol: And those Super League shows you attended in Europe?
AB: We jumped on a lot of beautiful big grass fields. These are the top shows with the top players – everything is done to perfection. The athletes are treated like stars. Simply wonderful shows from the atmosphere – the vibe – the crowds – signing autographs –thousands of people screaming your name. All of Europe was amazing. Rotterdam was so beautiful – we were in a forest and Aachen – what can I say? It was Aachen, first class all the way.

EqSol: The most valuable lessons you’ve learned in the last two years?
AB: To not take anything for granted. To appreciate where you are – what goes up can come down, so enjoy every moment and learn from every mistake. Everyone knows in this sport – you can be up and down – even in the same class.

The best lessons were when I was down and out, not doing well and had to pick myself up – you learn who you are, your character that you can pull yourself together and come through. Then you appreciate the ups so much more. The same person doesn’t always win. You aim to be consistent and on any given day you never know what’s going to happen. You try to make it your day, your moment – give it your best shot.

EqSol: Fall-winter competition plans?
AB: We are bringing some of our young horses and all the Grand Prix horses to Showpark and then we head to Spruce for the Masters, looks like Florida for the WEG trials – hopefully that will put me on the European tour again, the WEG and so on until the Olympics – end goal is the 2012 Olympics.

EqSol: Do you feel like this is destiny?
AB: I love to sing – but it was NOT FUN to sing in front of a crowd, it was totally nerve wracking. I love to compete and when I go into the ring I’m not nervous. Actually I’m nervous and anxious the day before. When I walk in that class it’s time for me to be with my horse – the rest of the world falls away and I get strangely calm. My brother Dylan is big into surfing – he talks about being at one with the wave, the rest of the world doesn’t matter. That’s how I am in the ring. Riding the wave.

Thank you, Ashlee! We wish you continued success.