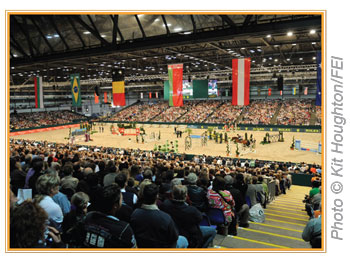 What a World Cup – FEI Rolex Show Jumping WC Final, Leipzig, Germany
While the World Cup in Las Vegas was touted for its exciting combination of two FEI disciplines, show jumping and dressage, Leipzig upped the ante this year. The 2011 Rolex FEI World Cup Finals hosted four finals for four FEI disciplines – show jumping, dressage, vaulting, and driving – in the same venue at the same time. As show jumping competitor Pablo Barrios (VEN), noted, “The venue was amazing. It was a super facility and a huge building. They had all sorts of different rings and things were run really, really well.” Quite a show.

Focus on Show Jumping
Germany maintained their victory status in another Rolex FEI World Cup Jumping Finals this year, but with two Germans, one Canadian, two Dutchmen, two Americans, one New Zealander, one Swiss and one Frenchman, the top ten was not dominated by one country or continent. Christian Ahlmann (GER) and Taloubet Z scored a final clear round to take the top spot in show jumping’s individual championship. The Olympic champions, Eric Lamaze (CAN) and Hickstead, finished second overall after they rocketed up the standings following an exciting round two victory. Jeroen Dubbeldam (NED) and BMC van Grunsven Simon finished third after an impressive double clear performance on the final day. The only other double clear on the last day, Beezie Madden (USA) and Coral Reef Via Volo made an impressive move up to place fourth. 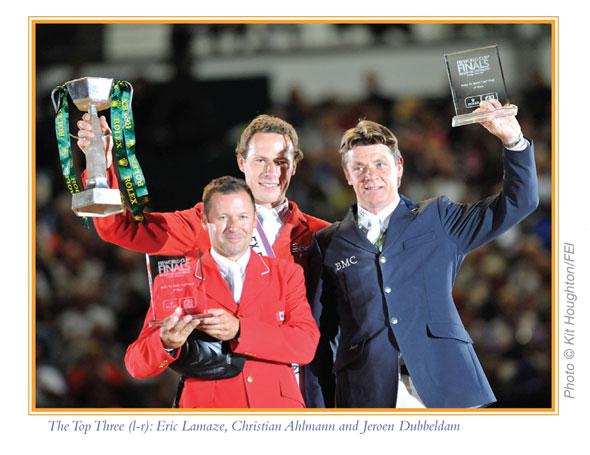 On opening day, it was two other American women who started out strong. Margie Engle and Indigo were the first to go clear in the speed class and finished fifth. Ashlee Bond and Cadett 7 were also clear for eighth place.

Engle, who had a refusal in round two but finished 12th overall after having only one rail over two rounds on the final day, commented, “He’s a good boy, (and) he wanted to be good all the way through. It’s been a great learning experience for him as a young horse; it was a lot for him. One thing nice to see is that I still have plenty of horse left. He could go another round.”

Frank Rothenberger of Germany set a more demanding test on the second day, and only seven riders out of 40 scored a clear first round to advance to a jump-off. The first of those was Pablo Barrios (VEN) and G&C Quick Star. However, their eight faults in the jump-off put them seventh that day.

Lamaze and Hickstead won in exciting fashion in 40.68 seconds over Ahlmann and Taloubet Z (40.86 seconds). They were four seconds faster than Schroeder and Eurocommerce New Orleans and Sergio Alvarez Moya (ESP) on Action-Breaker. Ward and his second mount, Antares F, were fifth when they had the final jump down, and Kutscher on Cash was sixth.

“It was fun, and it was fast – we were smoking!” said Lamaze. “We had some ground to make up after Thursday so we had no choice.”

“I didn’t take a chance on the first day, I went very casual,” said Lamaze, who noted that the World Cup Final was only Hickstead’s second indoor competition of the season. “I knew he wasn’t ready for those inside turns and to be competitive in that event. I was hoping for a clear and it didn’t happen. I had to come from behind. When you are on a sports car like Hickstead, anything is possible.” 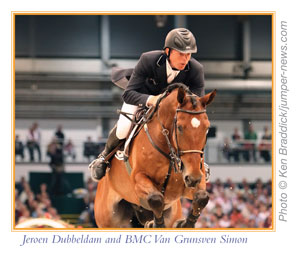 On the final day, the points were close enough where one rail could change the results significantly. Riders had to contest not one, but two difficult courses in one day, with only 19 coming back for the second round out of the 27 who started the final day. With the fastest time but a heartbreak rail in the jump-off on day two, McLain Ward and Antares F, completed the final day with just one rail and 10th overall. “I’m thrilled with Antares. I couldn’t have been happier; he was amazing all week,” Ward said.

Lamaze and Hickstead were clear in the first round, as were Dubbeldam, Madden, and Kutscher. The pressure was on Ahlmann and Taloubet Z, and they finished with four faults after a rail in the final double combination.

As the second round commenced, Kutscher was the only rider with a score of zero, while Ahlmann had four, Lamaze had six, Katie McVean (NZL) had eight with Delphi, and Schroeder had nine.

Although Dubbeldam and Madden were double clear, their point total coming into the last day was too much to overcome for victory but moved the pairs up to third and fourth respectively. 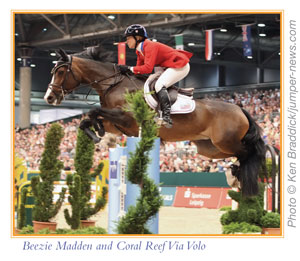 Dubbeldam admitted that he was still looking for a win – which he accomplished, along with Madden, the only two double clear they tied for the win in round 3. “You have to believe it’s possible and I went in today thinking I would go up at least a few places,” he said. “I knew my horse was in top form.”

This was the first World Cup Finals performance for Coral Reef Via Volo. “She got better as the week went on and rose to the occasion (on the final day),” Madden said of her mount. “Coming into (the final day), you’re only halfway through. The new format has the second round just as long as the first, so a lot can happen. I expected her to be good, to say I expected double clear would be saying a lot right now. She needs experience at places like this. I’m really happy at our first one. She was amazing.” 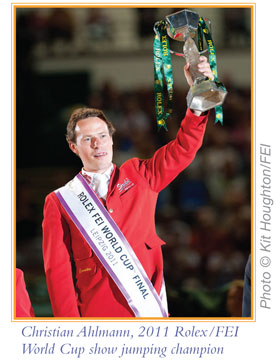 When riders in the top ten faulted or were carrying too many faults already, it all came down to the final two Germans. Kutscher and Cash had a devastating 12 faults, so the pressure was on Ahlmann. His final clear round gave Ahlmann the victory.

“I’m unbelievably happy that everything worked out the way it did,” Ahlmann exuded. “Taloubet did an amazing job all weekend and the only fault he made was his rider’s fault at the last fence in the first round. He has no experience of Championship competition so I’m delighted that he showed today that he can do it.”

Ahlmann added, “He has unbelievable power and scope, and he can do it over many days. I was lucky to have him.” Ahlmann said that after his European Championship gold medal, this win ranks as his most memorable.

Phenomenal Firsts – Royal & Rolex Kentucky 3-Day Event CCI4*
The Brits celebrated quite a bit this week, from Royal weddings to Olympic Level wins. Depending on your tastes these amazing events are certainly once-in-a-lifetime experiences. Hats off to the royal couple, HRH Duke William and HRH Duchess Kate, but the equestrian world congratulates “King Mary” who not only clinched the win on Kings Temptress in the Rolex 3-Day, she earned second place on Fernhill Urco. In her first event at the Olympic level, American Sinead Halpin was certainly a star. Speaking of firsts, the Reiners came to town during the Rolex 3-day for the inaugural Ariat Kentucky Reining Cup CRI5* and the crowds loved it. 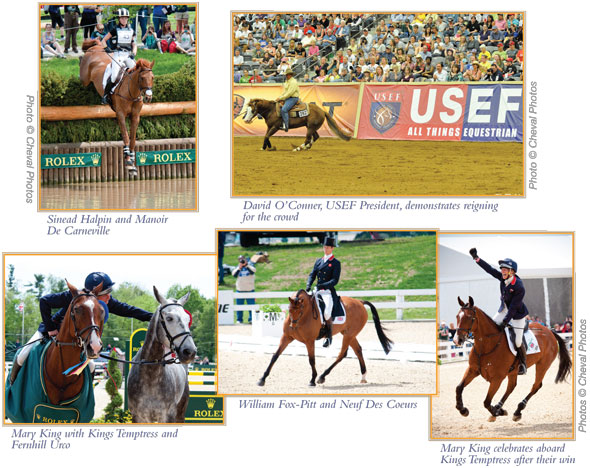