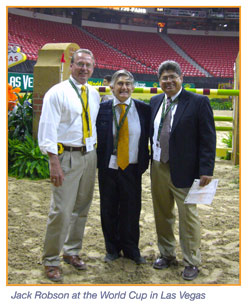 I was thrilled to have another fascinating conversation with yet another person who plays a significant role in our horse show world, actually one of this week’s World Cup Officials, President of the Jury Jack Robson. Robson has spent more than a quarter century working as a course designer, technical delegate and jumper judge.

EqSol: What is your horse history?
JR: Actually I don’t come from a horsey family. I’m a northeasterner – born in Massachusetts and have lived in both Connecticut and upstate New York. I’ve been in California for about 18 years.

My first career was as a machinist, making microchips before they were in vogue. One day a friend of mine who worked for Barney Ward in Brewster, NY in the early seventies called me when he needed a hand. So I said sure. Turned out I liked it a lot and stayed for seven years. You could say it was a turning point in my life.

A Fort Reilly Calvary School graduate at Barney’s taught me how to ride. I jumped up to 1.40m. When I realized I couldn’t afford to have horses, I chose to stay involved by working on the jump crew. My career progressed from there.

EqSol: How did your career as a horse show official progress?
JR: Frank Chapot helped me get my judge’s card. I was at the Saratoga Horse Show and Frank asked me if I was interested in getting my card. I said, ‘Yes sir.’ So he threw me a clipboard and a watch, said ‘You’re working on it’ and walked away.

Frank was my mentor in both judging and course design and I can’t thank him enough. He opened many doors for me.

I love course designing. When you ask fair questions and get good answers it’s a great feeling. I get to see all types of courses as a judge, learning each time. As a judge I get to watch the best jumpers at all levels – it’s the best of both worlds really. Then I can practice what I’ve learned when I design. I get a chance to design about ten times a year. And I judge about 30 weeks a year.

EqSol: Some of your favorite horse show memories?
JR: [smiling] When Pamela C and I got jumped in Cleveland. She was designing and we were sitting on the wishing well discussing the next class. She looked over her shoulder and said nonchalantly in that British accent ‘Be very still’ as the horse proceeded to jump over us.

In the early eighties Mason Phelps modeled The Newport Jumping Derby in Rhode Island after Hickstead. It was a big field. I remember Anthony D’Ambrosio’s horse leapt straight down the steep hill (instead of walking down) – it was maybe sixteen feet down. He landed flat on his stomach, got up and in two strides jumped the vertical. Rodney Jenkins got hung up on the Irish Bank. Buddy Brown wore a helmet cam with a Super 8 attached; he almost broke his neck.

The Tijuana Jockey Club hosted a horse show. That was fun.There was a zoo on the infield of the track. The show was on the grass field right beside the zoo. You waited for your class next to the lions and elephants. 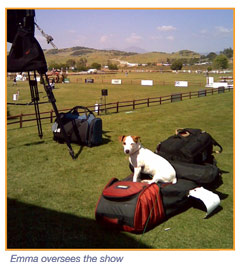 EqSol: And your future plans?
JR: Possibly the WEG. That would certainly be an honor. I will continue to work with Blenheim EquiSports and the Langer Equestrian Group in California and Colorado. HITS Arizona, HITS Ocala and Spruce Meadows might on the roster next year. In any case I’ll keep trying, improving my game. The sport evolves and you have to keep up with it.

Thank you Jack and thank you Emma (Jack’s Jack) for playing ball with Chloe.