By Erna Adelson with Jackie McFarland

Horses have long served as a magical medium for the rehabilitation and uplifting of spirits and minds; equine therapy is frequently implemented as a social and vocational tool for the physically and mentally handicapped, former veterans, and inmates. In the 1992 film Into the West, a mysterious horse rescues two children from the poverty, hostility and discrimination of the projects of Ireland. Mayisha Akbar and riders from the Compton Junior Posse—a steadily growing group of kids from a Los Angeles suburb better known for gang violence than blue ribbons—are finding that their equine companions have an innate power to inspire them to dream of lives beyond gang involvement, just like the supernatural horse of the film. Changing the greater perceptions of the equestrian community, these new additions to the Southern California hunter and dressage arenas are really turning heads. 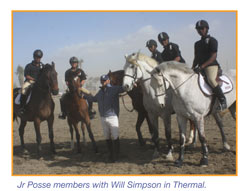 The Compton Junior Posse is a 501.3.c. non-profit dedicated to encouraging inner city and underprivileged youth to become productive members of society. Using horses and horseback riding to teach responsibility, discipline, and self-esteem, founder Mayisha Akbar has managed to change the lives of hundreds of inner-city kids. This equine medium teaches them valuable social and interactive skills, motivates them to set both academic and career goals, as well as simply providing a place where they can seek refuge from the often violent environments in their neighborhoods. Out of her small, backyard stable, Akbar has seen two decades of kids grow into leaders and outstanding contributors to their local communities. “We have found that investing in these children through our equestrian program motivates our kids to achieve their goals,” she says. Akbar has also rescued over 100 horses through her ranch.

Akbar, who grew up in the Harbor City Projects outside of Los Angeles, was raised riding horses and aspired to be a veterinarian. She wanted to give her own children the same equine upbringing, so she moved to an agricultural zone in Compton in 1988 to have horses. “At first,” she explains, “we weren’t affected by the neighborhood’s gang culture because the kids were young.” She recalls that neighborhood children started coming over unattended, so she would take them in for a meal and supervision as long as they helped with the horses. As this pattern became more regular, Akbar raised her standards—she made sure that as long as kids were spending their spare time at the ranch, they went to school and kept up their grades. She collected report cards to make sure there was progress. In return, each child was offered a safe place after school, food, warmth, and camaraderie. “It just happened out of needs for the community,” Akbar explains.

Early in the riding program, the Compton Junior Posse went mostly to rodeos. Akbar started to integrate English-style riding about three years ago after watching a flat class at a local horse show. “It was clearly so good for the horses to learn and progress the same way, and be judged the same way. Everyone walked, trotted, and cantered at the same time!” she noted, a big difference from rodeo chaos. Now, the Compton Junior Posse is primarily an English operation, and all of the rescue horses are trained under English saddle. Akbar says that since making the switch to English riding, she has seen Junior Posse riders benefit from more structure and discipline. “I was worried about not being accepted at hunter and dressage shows,” says Akbar, “but the English world has been so welcoming, so giving, and so warm! Everywhere we go we break norms. Everyone is so impressed with the athleticism and politeness of the Junior Posse riders—we are completely breaking equestrian stereotypes.” 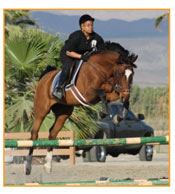 With the support of private donations, the Compton Junior Posse has grown from a refuge of necessity to a flourishing equestrian, husbandry, and educational program. Once on the verge of retiring due to the emotional toll of her work (Akbar estimates she’s lost 40 children over 20 years to gang violence), she has rallied in a most interesting way—by having introduced English style riding and equitation to the Junior Posse and finding support in some of the West Coast’s most prominent riders, trainers and veterinarians. She has forged ahead with a development plan for fundraising, support and maintenance of the program and now has some substantial goals, such as being the first inner city charter school and Interscholastic Equestrian League (IEL) team so students will be able to ride and receive PE credit from Junior Posse participation while they get core credits from regular schools. Additionally, as IEL participants, the members of the Compton Junior Posse would earn points toward collegiate equestrian scholarships when competing at IEL shows.

Our own Olympic Gold Medalist Will Simpson, who has worked with the Compton Junior Posse riders on several occasions and will be participating in the upcoming LAEC fundraiser, reports that “The Compton Junior Posse is a great program. They are so appreciative, love to learn and are incredibly talented. These kids aspire to go to the top of the sport – they want to be as good as they possibly can, which I think is a healthy approach. That attitude plus their dedication and a willingness to work hard is how to get to the top. Every single one of them has that drive.” He goes on to say that working with the program is uniquely rewarding. “I get as much out of it as they do.” 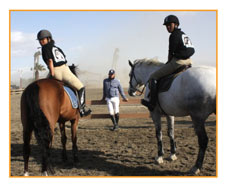 In the next year, Akbar’s goal is to raise 1 million dollars in gap funding while she awaits approval for federal and state grant money—primarily to hire a staff to support her efforts as the program grows. “I’m going to need a director of education, a director for the riding program, ranch management, an administrative coordinator, and capital for equipment, a hay barn, tractor, and classroom,” she says. She has also arranged for a long-term lease for her property so that the program can stay in its original location, which makes it convenient for the participants and their families. This evolving program that aspires to give more opportunities to inner city kids offers a new lease on life through horses and English riding. An unlikely bond that we hope can be everlasting.

The upcoming fundraiser May 30th at LAEC, featuring a silent auction, celebrity appearances, dining, entertainment, and dancing, is a major initiative for this cause.

Tickets are available online at www.comptonjrposse.org, and are $175 each.