Welcome to the e-news covering seven weeks of fabulous horse shows in two phenomenal locations – The Horse Park at Woodside situated on the border of Menlo Park and Woodside in northern California and the Colorado Horse Park in Parker nested between Denver and Castle Rock in Colorado.

Three weeks in June and early July for Woodside included the inaugural Bayfest Under Saddle Derby and a first time Grand Prix win for amateur rider Jessica Sullivan. Four weeks in Parker boasted a $5,000 Hunter Classic and a $10,000 Chronicle of the Horse Hunter Derby, plus a run for the $100,000 Grand Prix Rider Bonus if one rider wins all three Colorado Grand Prix events.

Woodside Summer Circuit
The 2009 Woodside Summer Circuit featured exciting jump offs, lovely hunter rounds, and some stylish equitation riders. Jumpers battled it out, and while it looked like Helen McNaught was invincible with her fleet of talented horses, she had to share the limelight. McNaught started off as queen of the jumper ring when she won both the $1,000 Welcome Stake and the $10,000 Woodside Jumper Classic on Ocean Cat (Doug & Julie White, owners). However, she had to give up her throne the second week when Duncan McFarlane edged her out of the win in the $20,000 Bayfest Grand Prix aboard Mr. Whoopy (Simone Coxe, owner). The third week it was an amateur rider who reigned supreme when Jessica Sullivan piloted her Classic Europa to victory in the $30,000 Golden Gate Grand Prix.

McNaught is fairly new to Northern California, but she has settled in nicely. “This area reminds me of home (England) and the weather is great. Woodside is quiet and filled with horse people, and I love the area shops. I’ve wanted to come up here for years and there is more competition than I expected. The Horse Park (at Woodside) is lovely and the big fields give you lots of riding area. What is there not to like?”

Sullivan was equally excited about her trip north. “This is my first time showing in Northern California and everyone is so nice. I train with Santiago Rickard at home, but I have been friends with Patrick Seaton for a long time so I decided to bring my four horses north and work with him.” Sullivan and Seaton found that they could be friends and work together, successfully it seems! 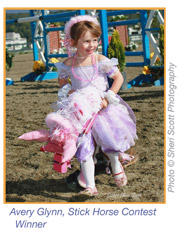 Having Fun on the Circuit
In addition to keen competition, Show Manager Chris Collman wanted to have some fun activities during the three weeks. The Stick Horse Parade was the hands down favorite. Throughout the week, exhibitors stopped by the horse show office to pick up a stick horse with instructions to decorate it in their own unique way. When Saturday afternoon rolled around, forty kids showed up at the grand prix ring to parade around before the big class. Creativity abounded, and while all the kids got great gift bags, it was Avery Glynn (Ned and Hope Glynn, trainers…and parents) who was named the overall champion. Dressed as a beautiful princess in pink, Avery paraded a pink fairy pony complete with pink bell boots, a pink bonnet, and lots of ribbons and streamers.

$125,000 in Bonus Money Up For Grabs
Topping the field repeatedly can pay off big for high performance riders on the Summer Circuits in both Woodside and Colorado.

In Woodside, if a rider can win all three of grand prix events, they take home the Woodside Jumper Accumulator. There was $25,000 in the 2009 Accumulator Fund and when it goes unclaimed another $5,000 is added. In 2008 Patrick Seaton won two of the three classes, earning an extra $5,000.

The potential for a big pay off remains and entices top riders to compete on the summer circuits year after year.

Cool Colorado
Horses and riders from more than twenty states and Canadian provinces converge on Parker to attend the Colorado Summer Circuit. The big classes had a true international flavor with Bjorn Ikast (Denmark) capturing the $25,000 High Prairie Grand Prix on Braveheart; Canadian John Pearce aboard Son of a Gun (Forest View Farm, owner) leading the victory gallop in the $40,000 Rocky Mountain Grand Prix and to wrap it up, Eduardo Menezes of Mexico rode Don Guido Mercedes Benz to the win in the $50,000 Grand Prix of Denver. With the wins split among these three top riders, the $100,000 bonus went unclaimed.

Hunters Take the Stage
Hunters enjoyed their share of the limelight during the Colorado Summer Circuit.

Colleen Acosta earned a big win in the $10,000 USHJA Hunter Derby aboard Posse (Chris Guthrie, owner). Usually the handsome bay horse competes in the Adult Amateur Hunters, but to prepare for the Derby Acosta rode him in the Modified Hunters and a low jumper class.

Summer Means Family
Competing in Colorado means family fun during the summer months. Page and Sarah Tredennick share a love of horses and riding, as do Suellen and Clare Walker.

Triple or quadruple the fun when the entire family gets involved, like with the Quagliano’s of Edwards, Colorado.