Summer Into Fall
Blenheim EquiSports hosted a month plus of shows to wrap up a very busy southern California season. Beginning at the Rancho Mission Viejo Riding Park in San Juan Capistrano for two weeks in August, down to Showpark in Del Mar for two weeks and with one week off returning to San Juan Capistrano in September. From IHF classes to USHJA Hunter Derbies and Young Jumper Championships to World Cup Qualifiers as well as the start of end of the year excitement with finals for Junior Hunters and Equitation riders, it was a jam-packed month of equestrian excellence.

The final fanfare will be in Vegas at the Las Vegas National, November 3-7. With a schedule for both hunters and jumpers, the Blenheim Team along with the South Point added a list of new perks for both competitor and spectator to savor.
BLENHEIM SUMMER CLASSIC HORSE SHOWS
As we think about the end of summer and head into fall – another year is flying by – we welcome you to August with Blenheim EquiSports. Once again several hundred horses, riders, owners and trainers enjoyed picture perfect weather and fabulous footing. So read on to enjoy the highlights of the summer season.

Thirty-five horse and rider combinations galloped onto the International Field to compete in the $25,000 Summer Classic Grand Prix during the first week of showing of the Blenheim Summer Classic Series. With twelve horses returning to the grass for the jump-off, the last to go proved to be best, Mexico’s Otavio Penedo and his partner Don Arturo Equisearch. The pair went fast and clean to clinch the win.

Patrick Rhodes designed a flowing course with several technical elements for a total of 16 efforts in a generous time allowed of 92 seconds. “It was a good field. Maybe a few too many clean, but overall I was happy,” commented Rhodes.

John Perez aboard Daniel Rihan’s Abel was the first go clean. The next two competitors were also fault-free, Joie Gatlin on Camaron Hills Quick Dollar (Camaron Hills Farm, owner), one of only two women in the jump-off, and Eduardo Sanchez Navarro on his own Virgo. 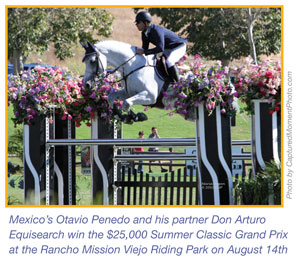 The clean rounds kept coming from the Mexican riders. Tenth in the ring, Francisco Pasquel riding his own Calavda Z, advanced to the second round. With a total of four rides for the afternoon, Perez also qualified his own Utopia as well as Daniel Rihan’s Twister for the jump-off. Galloping onto the grass sixteenth, Juan Jose Bancalari and Villeneve (7) made it seven. Sanchez Navarro and Centinaio 2, Rodrigo Lambre riding Carpaccio and Eduardo Menezes aboard Percynality Mercedes Benz, all posted clean rides. The other female representative in the jump-off was 17-year-old Californian Jocelyn Neff, competing in her first grand prix on Gaga 20 (Donna Neff, owner).

Only four of twelve riders managed double clear rounds. With the advantage of watching eleven of his fellow competitors precede him in the second round, Penedo knew what he and his 10-year-old mount had to do for the win. “I had to take all of the risks and it paid off.” The winning duo navigated the jump-off track in a time of 36.41, almost two seconds faster than the previous leading time, to secure the top prize.