Hunters had the spotlight in the Grand Prix field on a cool Saturday afternoon as the $10,000 USHJA International Hunter Derby commenced. A solid rain had fallen the night before, however the footing held up well and twenty-nine horses competed over what turned out to be quite a challenging course.

Competing in front of an audience of 200 plus, many a lovely (and usually brave) hunter spooked on course. The spooky spot – gray rocks along the side of the outside line – was reminiscent of the West Coast Junior Hunter Finals last summer. Approximately half the entries balked, stopped or refused to get near the rocks or jumps nearby. However a handful of horses didn’t take note and went on to jump magnificently.

Jenny Karazissis hunted around both rounds on two of Tonia Cook-Looker’s horses, Forbes and Aragon, riding each with style and ending up second and third respectively. John French rode Mountain Home Stable’s new mount Rumba to fourth in the first round, and then returned in the second round with a gorgeous handy course to take the win in both the round as well as overall. As always, the class was fabulous to watch and appears equally fun to ride.

World Cup Qualifier
The indoor arena was the place to be on Saturday night for the $50,000 Purina Mills FEI World Cup Qualifier, presented by Adequan. With a line out the door, the bleachers and VIP seating area were packed with spectators hoping to see some great World Cup level show jumping from the twenty-nine starters in the posted order. The course and horses did not disappoint, the class was phenomenal all the way to the last jump off round.

Bernardo Cabral of Portugal built a tall and tough route, using every bit of the intimate indoor space. First to go, east coast equestrian and Olympic Gold Medalist McLain Ward made it look easy riding Sagamore Farm’s Phillipa without a fault. We did not see another clean round until Jill Henselwood on Black Ice, Ashlee Bond aboard Cadett 7 and Helen McNaught all rode fault-free going thirteenth, fourteenth and sixteenth in the order. Two more men rounded out the six returning for the jump off – Harley Brown piloting Cassiato and our west coast Olympic Gold Medalist, Will Simpson on Archie Bunker. The four faulters took the remaining ribbons, among them some of our top World Cup contenders including Richard Spooner, Mandy Porter and Rich Fellers.

The top six had a lengthy jump off with a combination of long gallops and tight turns to master. McLain and Phillipa set the pace, going neat and clean in 42.51. Both Jill and Black Ice and Ashlee on Cadett 7 went for the win, each finishing with fast times, but one rail down. Harley rode Cassiato strategically to a clean round, knowing he would end up second or third. Leave it to Will for the finale – he cruised around the jumps in a fast and clean 40.24 for the win. 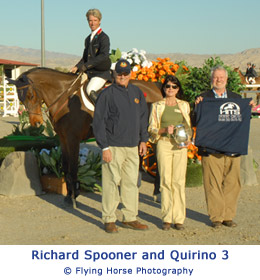 HITS celebrated the horse as art in many ways on the eve of the final day of January 2009. Exhibitors and spectators alike enjoyed the displays presented by artists from California, Colorado and Oregon. Plus a unique installation by Embarr Tack Room Design, specialists in tack room design and construction.

Hung with care throughout the arena spectator entrance, equine paintings and prints created a stylish start to the upcoming artistic performances on horseback in the $50,000 Strongid® C 2X FEI World Cup Qualifier, presented by Adequan.

The indoor arena was literally filled to the rafters in anticipation of the evening’s special events, including the once-in-a-lifetime experience of seeing and listening to John French sing the National Anthem. His voice not only boomed but he rocked the house! The cheers were heard all the way back at the barns.

Mr. French set the stage for a fabulous night of show jumping. Thirty-one horse and rider combinations negotiated the Bob Ellis course. Difficult but not deadly, twenty-three of those who attempted had a rail or more, including Olympians McLain Ward on Phillipa, and Will Simpson on Archie Bunker. However eight went without fault and advanced to the jump-off. 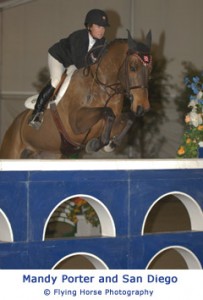 Ashlee Bond set the stage on Cadett 7. She was flying high – literally – as she made the sharp rollback turn from fence 6b to 3b. Almost separated from her horse, she quickly recovered to finish with four faults in a fast 33.88. Katherine Bardis riding Mademoiselle made the turn but lost the pace heading to 3b, resulting in a refusal. Quick indeed, she still managed to make a dash for cash, and even with the stop, stayed within the time allowed for four faults.

In galloped McLain Ward on Goldrika 559, who had a fabulous time with eight faults. Next to attempt a clean and fast ride was Lionel with Erin Duffy aboard. She went for clean not speed, but had four faults as well. Halfway into the jump-off with no one clean, Mandy Porter and San Diego entered the arena. Consistent since the start of World Cup qualifying season back in the fall, and after winning the Thursday $25,000 Grand Prix, they once again set the time to beat – clean in 32.93. Lane Clarke riding Kiss the Sky made a gallant effort but had two rails. With two left to go, Mandy held the lead. Richard Spooner maneuvered Ace to a beautiful clean ride, in 32.94. One one-hundredth of a second off the leading time – the definition of a close second. Black Ice with Jill Henselwood took the final shot at the win, finishing with four and settling for third best.